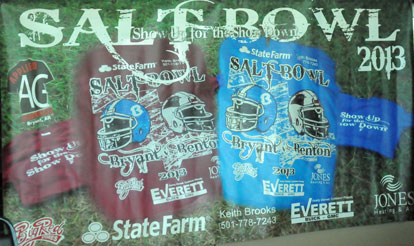 The festivities surrounding the 14th annual Salt Bowl get under way in earnest this evening at Everett Buick GMC, with a community pep rally starting at 6 p.m. Hot dogs and drinks will be served with players, band and spirit groups on hand.

A community pep rally for Benton will be held Wednesday a 6 p.m., at Everett’s.

Benton is the home team this year in the annual Saline County gridiron battle. It’s the 31st renewal of the rivalry, which will be held at War Memorial Stadium in Little Rock this Friday at 7:30 p.m.

This year’s theme is “Show Up for the Showdown.”