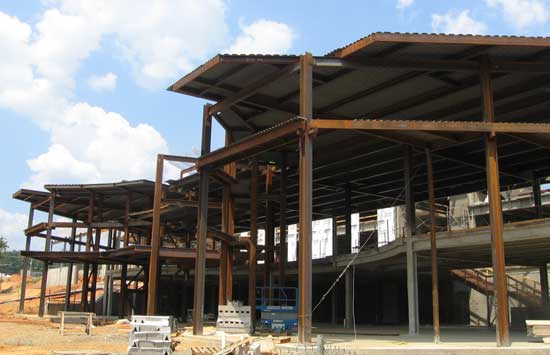 The Bryant School Board meeting began Monday, July 18, at the construction site for[more] the new high school building. The last piece of steel was set in place for the building and the School Board commemorated the milestone with a Steel “Top Out” Celebration.

At 6, the regular monthly meeting began with facility updates from architect Brooks Jackson. The high school project is currently 26 percent complete and the progress on the new elementary school is on schedule.

Richard Stipe, District Business Manager, addressed the Board with two time and attendance systems that the administration has been evaluating over the past couple of years. Many school districts around the state and nationwide use systems to track work time and attendance of employees. The system helps to reduce workload for staff that presently process time and leave sheets.

A new mass notification system, ParentLink, will be implemented this school year and Mark McDougal, Technology Director, presented the newest information. ParentLink will be used to communicate with parents and students regarding classroom performance and it provides a secure portal for student grade information. After hearing more about the system, the topic was tabled by the Board until next month’s meeting.

The District has been using Lightspeed System’s Web Filter, Mobile Filter and Network Monitoring for the past three years. With Common Core being implemented into the District this year, and the “Bring Your Own Device” initiative starting, the costs of Lightspeed could become unclear with the number of computers and devices that go onto the district’s server growing. As a result of that, the Board approved a five-year lease agreement that the Technology department recommended with Lighspeed to lock in the price for the number of computers that the district currently has. The district is required to pay for four years of service with a fifth year free.

Ribbon-cutting: Quizno’s
Hornets perservere to win 7-on-7 tourney at HSU