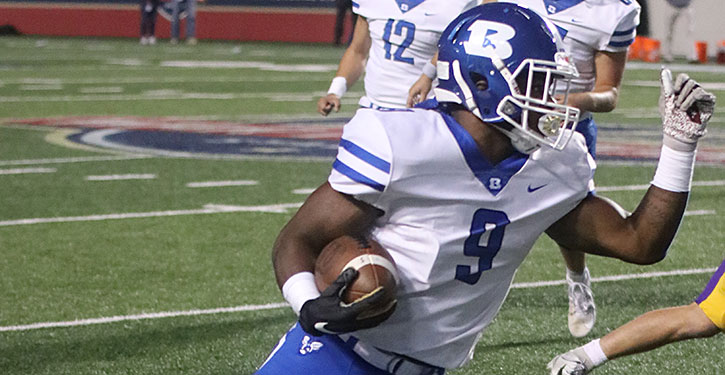 NORTH LITTLE ROCK — Midway through the second quarter, the North Little Rock Charging Wildcats had the audacity to take a 14-9 lead over the two-time defending Class 7A champion Bryant Hornets.

The lead lasted all of 26 seconds.

The Hornets responded to this bit of adversity, this challenge from the unbeaten Cats, by scoring the next 42 points in a record-breaking eruption that turned into a 58-21 romp for Bryant’s 25th consecutive victory.

Senior quarterback Austin Ledbetter, in the rare opportunity to play an entire game, broke the school record for passing yardage in a game and total offense by an individual. His 534 yards snapped a 20-year-old mark of 501 yards set by Jeramie Wooten against Benton in 2000. His 561 yards of total offense busted the record of 489 yards set by Scott Peeler against Benton in 2003.

Catching 10 of those passes for a record 266 yards was Hayden Schrader, eclipsing the old mark of 240 yards by Richie Wood against Russellville in 2004.

As a team, the Hornets crushed the old record for total yardage in a game. The old mark was 626 yards against Little Rock Catholic in 2017. On Friday night against a formerly unbeaten team, ranked third in the state, the Hornets amassed 826 yards of offense.

Ledbetter threw for five touchdowns, two to Schrader and one each to Cory Nichols, Jordan Knox and, on the record-breaking throw, to Blake Everett.

By that time, head coach Buck James might’ve called off the dogs but, out of respect for his senior quarterback who has been key to both State championships and all of those 25 wins in a row, he kept him in the game to throw the 65-yard touchdown pass to Everett that broke the record.

Schrader nearly had his record for receiving yards by halftime. He had eight receptions for 220 yards.

The 37-point difference in the game was, by far, the largest margin of victory over North Little Rock in the history of the rivalry, which dates back to 2002. It’s the first time a Bryant team has won in North Little Rock since 2004.

On Thursday, when discussing the showdown, Hornets head coach Buck James pointed out that, over the last three years in freshman games, Bryant had defeated North Little Rock 34-6 in 2019 and 45-12 in 2017. Despite a 34-13 loss to North Little Rock in 2018, the Hornets, as freshmen had taken care of business against the Cats. James was hinting at what the outcome on Friday might be, loosely based on that and what he’d seen of scouting video. Defensive coordinator Quad Sanders had said, “If we tackle well . . . “

The Hornets tackled well enough to limit the vaunted ground game of the Wildcats. Including five sacks of quarterback Kareame Cotton, Bryant held them to 81 yards rushing.

Hornets’ offensive coordinator Kirk Bock working with coaches Adam Pendergrass, Juilian Jones and Shane Clancy had worked up a game plan that eviscerated the North Little Rock defense much of the night.

And, in that way, it was kind of a perfect storm for that kind of production. The Hornets were faced with long field most of the way. In the first half, they had series that started at their own 9, 2, 3 and 19. They got points on three of those four drives and, but for a turnover, may have been 5 for 5.

North Little Rock had three chances to get more points but twice they lost possession on interceptions as Kyle Knox got one in the end zone in the first half and Malachi Graham got a pick at the 1 at the end of the game. On another occasion, the Hornets made a goal-line stand, holding the Cats out after they had a first-and-goal at the 4.

Xavier Foote capped off a 91-yard drive to open the game with an 8-yard run. The march set the tone for the aerial circus. Schrader caught passes for 9, 33 and 42 yards along the way.

On North Little Rock’s first possession, the Cats drove to their own 45 before Bryant linebacker Koby Melton stopped a run for a loss. An incomplete pass led to the first punt of the game.

Twice the Hornets partially blocked Selhorst’s punts. This time, Brayden Godwin got a hand on it, resulting in a 17-yard kick. Later, Andy Scott got a piece of one.

The Hornets turned the ball over on downs at the North Little Rock 36 and, with Cotton completing a 36-yard pass to Torrence Moore, the Cats reached Bryant territory. Linebacker Miles Aldridge sacked Cotton on the next play but the drive stayed alive with a pass interference penalty that converted a fourth-down.

They reached the 4 and linebacker Hart Penfield knifed through twice to thwart running plays. On a fourth-and-goal at the 1, Cotton tried to throw for the score but was off target.

From the 2, Bryant drove to midfield. A pass to Nichols reached into North Little Rock territory but the ball was ripped loose and the Wildcats recovered.

They, however, went three-and-out, punting the Hornets back to the 3. With Ledbetter and Schrader hooking up for 32 and Foote turning a screen pass into a 25-yard gain, the Hornets drove to the 14 where a third-down pass fell incomplete.

Brock Funk entered and booted a 31-yard field goal to make it 9-0.

A kickoff return to midfield by Johnny Lewis set up North Little Rock’s first score, a 31-yard strike from Cotton to Jaquori Stewart.

And when the Hornets fumbled on the return of the ensuing kick, the Wildcats took advantage with a 28-yard touchdown run by Chris Jefferson that gave them the 14-9 lead.

Pushed back by a delay penalty, the Hornets were 86-yards away from regaining the lead. It all came on one play. Ledbetter hit Schrader in stride down the middle and the senior receiver dashed the rest of the way for the touchdown.

A 50-yard bomb from Cotton to Stewart had the Wildcats thinking of regaining the lead as time was running out in the half. But Kyle Knox won a jump-ball for a pass in the end zone and the Cats were denied.

With 2:50 left, the Hornets started a series at their own 20. Schrader caught a 13-yard pass and Robert Hendrix got 18 on his reception. That set up the touchdown as Ledbetter found Jordan Knox all alone down the left sideline. Knox turned it into a 49-yard touchdown that had the Hornets ahead 24-14 at the half.

North Little Rock got the ball to start the second half. Cotton fired an 18-yard pass to Jefferson, but the Cats stalled at midfield.

That’s when Scott broke through and got a hand on Selhorst’s punt. Still, it went 30 yards and the Hornets began their second half onslaught from their own 20.

Thanks to a 40-yard completion from Ledbetter to Schrader, some hard running by Bracey, who finished with 133 yards on the ground; a 17-yard scramble by Ledbetter to convert a third down, the Hornets reached the 6. From there, Ledbetter threw to Schrader who was all alone in the end zone.

A holding penalty knocked North Little Rock off schedule. On third down, Penfield sacked Cotton for a loss of 11 and a punt resulted.

Starting at their own 36, the Hornets found the end zone in eight plays. On a fourth-and-10 at the 35, Nichols out-fought North Little Rock defenders at the goal line, hauling in Ledbetter’s pass for another score to make it 37-14.

After the Cats went three and out, Anderson broke his 71-yard run that set up Foote’s second TD from 3-yards out.

The two teams exchanged punts as the third quarter concluded. Godwin and Ivory Gilmore combined on a sack along the way.

North Little Rock punted the Hornets back to the 23 and, on first down, Bracey broke a couple of tackles and set sail for a 77-yard touchdown run that had the Hornets up 51-14 with 5:56 left to play.

Cotton answered with a 54-yard touchdown pass to Felix Wade.

Bryant got the ball back at its own 16 and with the record for passing yardage in sight, the first team for the Hornets stayed in the game. The gap was closed by a 14-yard strike to Nichols. Two plays later, Everett made a fingertip catch of Ledbetter’s pass, breaking free behind the secondary, scoring from 65 yards out.

The Hornets go for the second consecutive unbeaten regular season next Friday at home against Conway, which defeated Little Rock Catholic on Friday, to improve to 6-2.