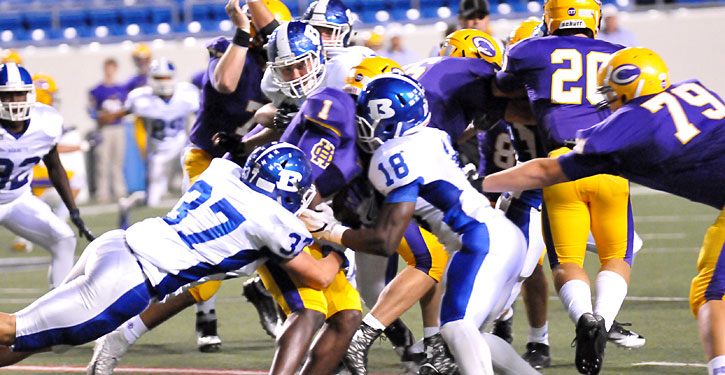 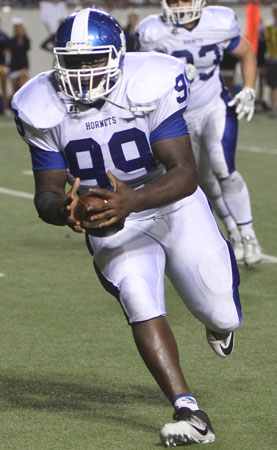 LITTLE ROCK — As in their first four games this season, the Bryant Hornets made mistakes in game number five on Thursday night against the Catholic Rockets at War Memorial Stadium. The difference was that, this time, with grit, determination and relentless effort, they played through them. They didn’t get sidetracked or distracted or down. The Hornets just kept after it.

The Hornets scored on offense, defense and special teams as everything clicked in unison for the first time this season.

On special teams, Marvin Moody blocked a punt and claimed the ball in the end zone for a touchdown; Hayden Ray drilled a pair of field goals and punted superbly; and Michael Jones returned a punt 20 yards to set up a score.

Defensively, sophomores Andrew Hayes and Kajuan Robinson each came up with a pick-6 — a particular thrill for Robinson, a defensive lineman in his first year of football.

Meanwhile, the Hornets held the Rockets to 43 yards of total offense in the first half. And, though Catholic finished with 204 yards, 99 of it came on two plays. 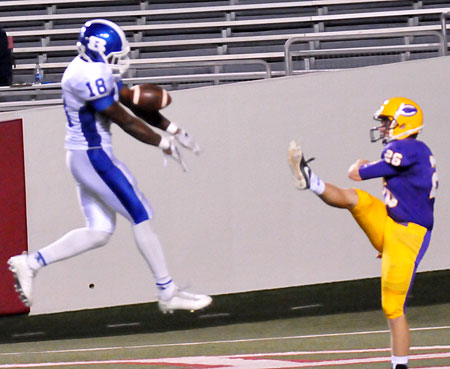 Offensively, the Hornets came out firing. And they played through four turnovers, compiling 277 yards of offense including 237 of that in the air. They scored on the ground and via the pass.

Bryant head coach Buck James, who used the short week to double up on practice with sessions in the morning and in the afternoon, insisted along the way that his team would come out more aggressively on offense, taking more risks. After not scoring at all in the first quarter of any of the previous games, the Hornets put up those 17 points, all in the opening stanza. 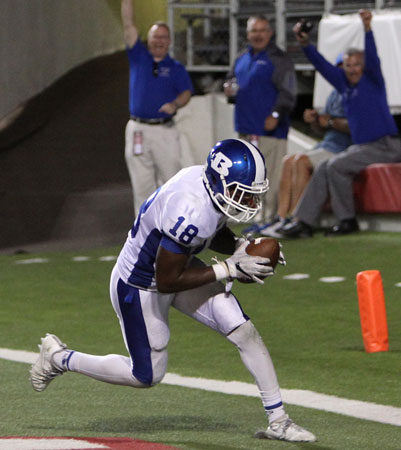 Marvin Moody recovers the kick he blocked for a touchdown. (Photo by Rick Nation)

Though the Hornets were forced to punt, Ray drilled a kick that was downed at the Rockets’ 1. Bryant’s defense stuffed three plays there and Catholic had to punt out of the end zone. Carlton Adams got the kick away (this time) but Jones fielded it at the Rockets’ 35 and made a sparkling return to the 15.

On the next snap, Jeremiah Long sliced through the Rockets’ defense for a touchdown.

In turn, the Rockets lost yardage on two of three plays. End Madre Dixon forced Catholic quarterback Taylor Price to throw too quickly and incomplete. After Hayden Knowles dropped Price for a loss, the Hornets got the ball back at the Catholic 42. 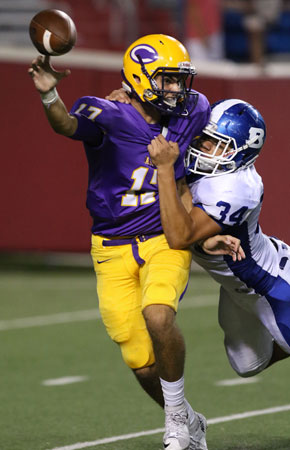 Bryant’s Madre Dixon (34) hits Catholic quarterback Taylor Price as he gets rid of the ball. (Photo by Rick Nation)

Hefley converted a fourth down with a 7-yard strike to Murray. Later, the Hornets converted a third down with a throw from Hefley to Reece Coates, who turned a short pass into a big one. Coates would catch six throws for 101 yards in the game.

On a first-and-goal from the 10, Hefley tossed a shuffle pass to Seth Tucker that he turned into a touchdown only to have a penalty negate it.

Bryant was unable to make it up but Ray came on to boot a 30-yard field goal.

Down 10-0 with 2:26 left in the first quarter, the Rockets saw things go from bad to worse when Price’s pass was picked off by Hayes, who sprinted up the seam for a 28-yard touchdown return.

Ray knocked through the extra point and it was 17-0 with 1:37 still to play in the opening period.

Hefley tossed an 18-yard pass to Coates and a 22-yard strike to Curtis to put Bryant in position to add to the score but a pass to the end zone was picked off by Orlando Henley. 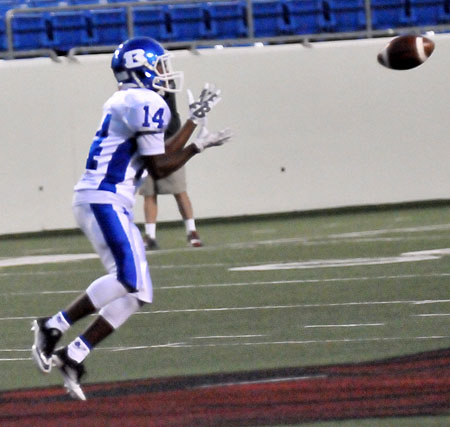 The Rockets picked up a first down but, moment later, they faced a third-and-6 at their own 37. Dixon and Nathan Mayes combined to sack Price, forcing a punt.

The kick figured to give the Hornets good field position but when Jones went to catch it, the ball got loose and Catholic’s Joseph Bilger recovered.

Given new life, the Rockets ran their first play of the evening in Bryant territory and Samy Johnson sliced 27 yards. He would eventually score on a 12-yard burst out of the wildcat, making it 17-7.

Over the next two defensive series for the Hornets, sophomore linebacker Jakob Neel made a tackle for a loss as did Mayes and Moody. Welch broke up passes on each possession. 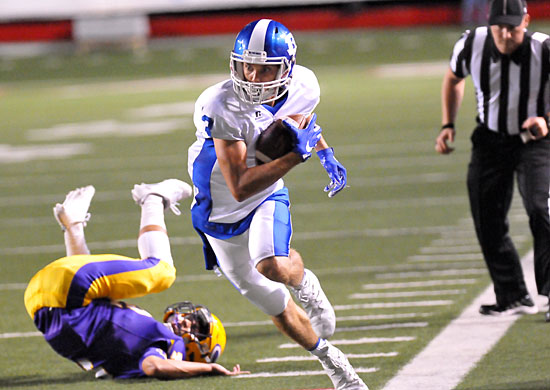 Reece Coates (3) walks the tightrope on the sideline, staying fair for a big run after the catch. (Photo by Kevin Nagle)

Meanwhile, the Hornets fell victim to a blitz and a sack on a third-and-2, forcing a punt. Then the Rockets’ Jared Allison made the first of his two picks.

With just over a minute left in the half, Adams was back to punt. A bad snap made the kick impossible and Bryce Thomas brought him down at the Rockets’ 42.

Beaux Bonvillain took over at quarterback, completing passes to Coates and Tucker. With the clock down to the final seconds of the half, Ray hit a 37-yard field goal to make it 20-7. 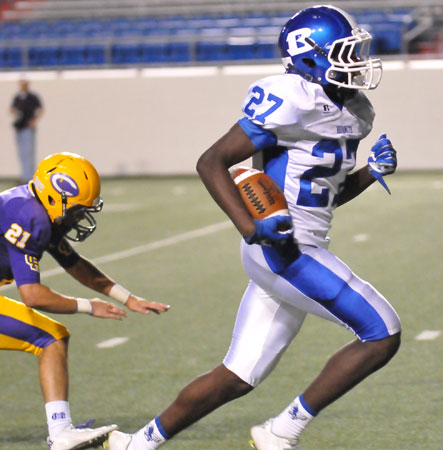 But, on the ensuing kickoff, Henley set sail on a 94-yard touchdown return. Though Chris Elser missed the extra point, the Hornets’ cushion was gone. The teams went to the half with Bryant up 20-13.

One of Catholic’s big plays came after the Hornets were forced to punt on the first series of the second half. Somehow, Price squeezed a pass in between Jones and Welch to Shepherd. With both Hornets going for the ball, Shepherd turned upfield only to be dragged down from behind at the Bryant 25.

A 19-yard pass to Preston Wilson followed, setting up Johnson’s 4-yard touchdown run. Elser’s extra point tied it at 20 with 8:24 left in the third quarter.

The Hornets came right back to regain the upper hand. Bonvillain found Coates for 17 yards and, a play later, the same duo combined for 11 yards. Senior running back Cameron Coleman broke a 27-yard burst and, a play later, Bonvillain threw a bubble screen to Randy Thomas who, aided by blocks from DeAmonte Terry and Landon Smith sprinted 25 yards for a touchdown. 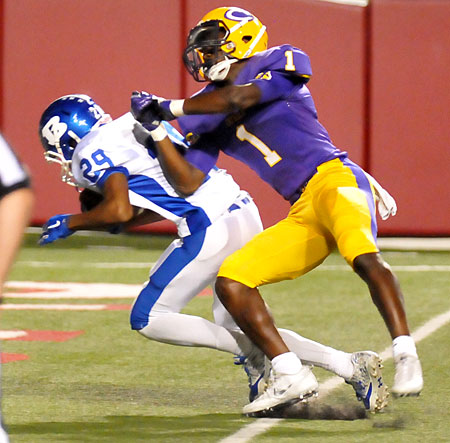 Andrew Hayes scores after an interception as Catholic’s Samy Johnson tries to make a tackle. (Photo by Kevin Nagle)

Ray added the PAT then booted a kickoff that Luke Schildknecht dribbled as the coverage team descended upon him at the 9.

On the first play there, Dixon pressured Price who was rolling out to the right. Dixon tipped the ball, which was caught then by Robinson who stepped into the end zone for a touchdown. Ray’s extra point made it 34-20.

It stayed that way until the fourth quarter when after Dixon’s stop for a loss on Henley and a holding penalty that negated a 28-yard completion, the Rockets were pushed back to their own 9 and had to punt.

Adams fielded the deep snap okay but Moody was right there to knock down his kick. He scrambled after the ricochet and came up with it for a touchdown with 10:19 left in the game. Ray added the point and it was 41-20. 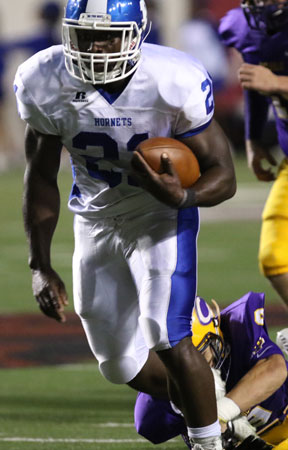 Cameron Coleman barrels past a tackler. (Photo by Rick Nation)

The defense forced another punt and Hefley returned to complete passes to Randy Thomas, Curtis and C.J. Wallace before the Hornets’ drive stalled at the Rockets’ 41.

Catholic took over on downs and James started working in reserves. A play into the possession, Johnson broke a 51-yard touchdown run and, with 2:49 left in the game, the final score was on the board.

Now 3-2 overall and 1-1 in conference play, the Hornets return home next Friday to take on Little Rock Central. 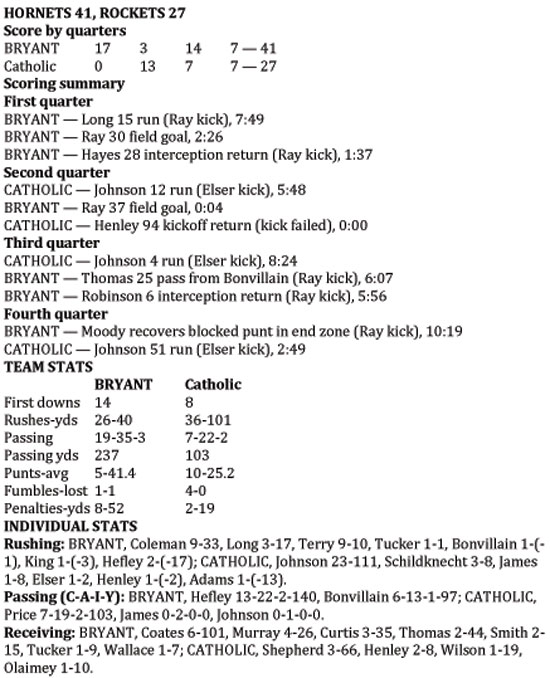