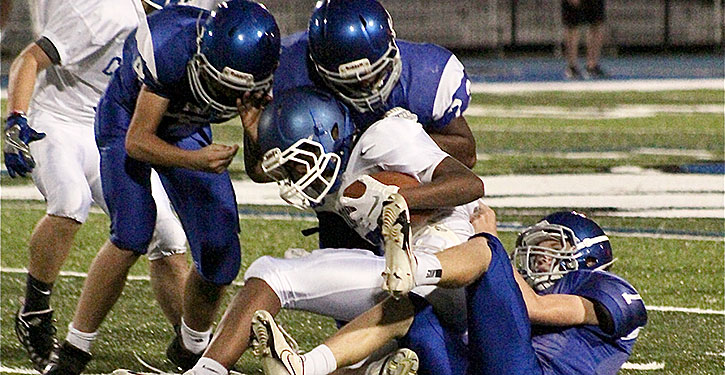 It seemed like Bryant Blue Hornets’ linebacker J.T. Allen was in on every other tackle or so on Thursday night. But that wasn’t all he contributed. On offense, he rushed for 35 yards on just three carries. And on special teams, he ran one kickoff back 75 yards for a touchdown and another 69 yards to the Conway Blue Wampus Cats’ 8, setting up another score.

Both returns were part of a 46-point second quarter shootout. The game entered the period scoreless and, afterwards, Bryant Blue led Conway Blue 28-18.

The second half was a defensive struggle, but the Hornets added a clinching score late in the game to post a 36-18 victory, which improved their record to 4-0 on the season going into the 2020 version of the Hornet Bowl against Bryant White on Thursday, Oct. 8.

Jaysean Robinson rushed for 105 yards and scored three touchdowns. Quarterback Jordan Walker rushed for 32 yards and passed for 105 including a TD toss to Carter Ratliff.

The Hornets’ defense, after surrendering those 18 points and 269 yards of offense in the first half, knuckled down and held Conway Blue to a net of 29 yards in the second half.

The Cats actually scored first. After the Hornets’ first possession ended with an interception by Jacoby Wade, Conway Blue drove 87 yards in nine plays. The key snap was a second-and-11 from their 24. Quarterback Tyson Bradden completed a 39-yard pass to Ty Fason.

Bradden completed two more passes after that, 10 yards to Noah Files and 12-yards to Kanard Turner. From the 10, two rushes by Fason found the end zone. The touchdown came on the first play of the second quarter.

But the Hornets stopped a run for a two-point conversion just shy of the goal line.

And, on the ensuing kickoff, Allen fielded the kick at the 25 and bolted up the middle of the field all the way for an answering score.

The Cats answered after a good kickoff return and a face mask penalty set them up at the Bryant 42. Conway Blue faced a fourth-and-3 at the 35 but picked up the first down on a 7-yard run by Braedyn Omolo. From the 28, Omolo broke a touchdown run and the Cats led 12-6.

Allen nearly returned the ensuing kickoff for another touchdown. As it was, he was knocked out of bounds 8 yards short.

Three carries by Anderson put the Hornets into the end zone. Walker kept for the two-point conversion and it was 14-12.

The defense, aided by a false start penalty, forced Conway Blue into a three-and-out on the ensuing series. Allen had a first-down tackle for a loss and, on third-and-6 at the Bryant 47, Landon Jackson made a stop for no gain. The Cats decided to go for it on fourth down but Bradden’s hurried throw fell incomplete.

Remarkably, both teams would score again in that time.

First, it was Conway Blue on a 65-yard touchdown pass from Bradden to Turner with :24 to go. It closed the gap to 20-18. The Cats went for two in hopes of tying it but were denied when Bradden’s pass fell incomplete.

Bryant Blue answered that score. Walker hit Ryan Reynolds with a pass that turned into a 64-yard play to the Cats’ 2. The Hornets called timeout and, on the last play of the half, Robinson plunged in for the TD. And when Walker hit Ratliff for a two-point conversion, it was 28-18.

To start the second half, the Hornets drove to the Conway Blue 32 but turned the ball over on downs.

The Cats drove it back to the Bryant Blue 46. But Juan Olvera stopped a run play for no gain. On second down, a dropped pass undermined the Cats’ effort, setting up a third-down play in which Jackson sacked Bradden, forcing a punt.

The Hornets picked up three first downs after starting at their own 27 but wound up punting it back to Conway Blue.

On second down from the 29, a bad snap undermined the Cats. Fason recovered it but was dropped by Allen for a loss of eight. On the next play, Conway Blue tried a handoff and a lateral. The play picked up 6 but that wasn’t enough for a first down.

The Cats lined up to punt but faked it. Fason, the kicker, threw to Carr only to have Allen there to make a tackle well short of the line to gain.

Bryant took over at the Conway 27. Robinson set up the score with a 16-yard burst. He scored from the 19 then added a run for a two-point conversion to put the game away.