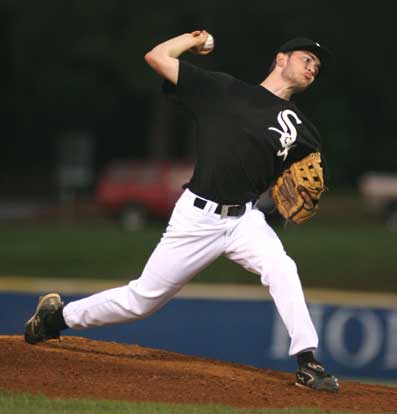 "Ya don't tug on Superman's cape,

"Ya don't spit into the wind,

Even though the Hot Springs AA American Legion baseball team was down 6-0 before the first inning was over, at least one of its players decided to do a little trash talking at the Bryant Black Sox Senior Legion team at BHS field Monday night.

And it didn't stop as the lead began to grow.

The player even had words with one of the Bryant coaches.

So, when the lead ballooned to 10-0 or so, instead of shutting it down (by not advancing on wild pitches or passed balls or only going station-to-station on hits), the Sox kept playing and, in five innings, they wound up with a 16-0 victory to open their season.

Admittedly, Hot Springs didn't have its entire complement of AA players, filling in with members of the A team which fell earlier in the evening, 12-0, to Bryant's Junior team but the Sox looked sharp.

They played errorless defense behind starter Caleb Milam and relievers Austin Queck and Tim Bearden who combined on the two-hit shutout. At the plate, Bryant cracked 12 hits including four by Brennan Bullock (each driving in a run) and three by Tyler Sawyer. Sawyer blasted a three-run homer in the third and drove in four in the game. Brady Butler drove in three runs with his two hits.[more] 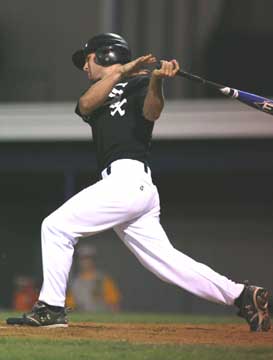 Manager Craig Harrison said he got what he was looking for from the game.

"It was a good game," he stated. "We came out aggressive in the first inning and they misplayed some balls but, it's a good start to a season. You can make some mistakes and still  hopefully they don't hurt you in the end.

"I thought their pitcher wasn't too bad," he continued. "He had a pretty decent fastball but he couldn't get his breaking pitch over and these guys, especially our older guys, know that when a guy has one pitch unless he's really getting it up there — I thought the second and third innings, we really hit some balls hard."

Milam retired nine of the 11 batters he faced, pitching around a one-out walk in the second and a one-out double in the third, striking out the side in both frames.

"We told him to go establish the fastball," Harrison related. "The first two innings, we threw three curveballs. They flare one in the third and so I said, 'Now, we're going to throw it,' and he made some good pitches to the lead-off hitter. And it was 8-0 but we were still treating it like it was 1-0.

"Queck came in and did what he was supposed to do and Tim, I don't know how he does it," he added. "The guy hasn't thrown a pitch in a year and he goes out there and it looks like it's 900 miles per hour. Timmy's a special person, special in a great kind of way. What he's been through, that right there is enjoyable. And he got a little pumped up with the talk and had a little extra hop on it there. The curveball he threw was a good one. We didn't really need to throw it but there were two outs and I told Tic (assistant coach Tic Harrison), let's work on something here."

Bearden played a month for the Sox last summer before being called to basic training in the National Guard and he appeared to pick up right where he left off last June. 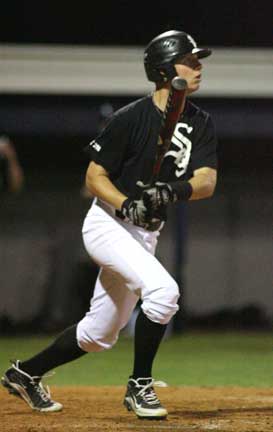 The six-run first began with a walk to Hunter Mayall, the first of three he waited out. He swiped second and advanced to third when Caleb Garrett struck out on a wild pitch. Garrett took off for first as catcher Kyle Green collected the baseball. But instead of throwing to first, Green tried a pick-off throw to third that got past Chase Grimmitt, though not far enough for Mayall to score. Garrett got caught in a rundown between first and second and worked his way back to first.

Sawyer followed with a sacrifice fly to shallow left. Garrett alertly tagged at first and when the high-arcing throw came in to the plate, he reached second.

Kaleb Jobe lashed a liner to center for a single then raced home all the way from first behind Garrett on a two-run double into the right-field corner by Butler. A late, high throw to the plate from the relay man allowed Butler to take third on the play.

Justin Blankenship and Bullock belted consecutive triples to right-center to make it 5-0. Ben Wells drew a walk and a double steal got Bullock home before Hot Springs starter Jonathan Hall got out of the inning.

In the second, Sawyer drilled a double to right, took third on a long fly by Jobe and scored on a sacrifice fly from Butler.

On a play that didn't go unnoticed by Harrison, Blankenship hit a high pop on the infield and, because he was hustling out of the box, when it dropped he was pulling into second. From there, Bullock singled him in to make it 8-0. 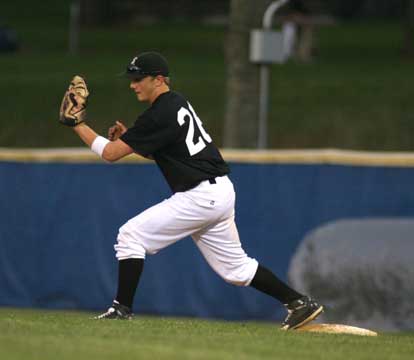 The third inning began with another walk to Mayall and, on an errant pickoff throw, he took second. On the play, the Hot Springs shortstop, "deaked" Mayall at second, acting like he was about to take a throw to make Mayall slide, which he did. The jawing intensified.

Garrett singled Mayall to third then Sawyer unloaded for a long homer to right to make it 11-0.

Holt gave way to Clay Fowler but, an out later, Butler singled, advanced on a wild pitch and, with two down, scored on Bullock's third RBI single. Walks to Wells and Austin Benning loaded the bases but Fowler got Mayall to sky to deep right for the third out.

In the top of the fourth, Queck got the first out but then hit Tyler Ellis, the Hot Springs shortstop, who flashed some attitude as he slowly made his way to first. Kyle Rosberg slapped a single to right for his team's second hit but then Queck got Seth Wilson to bounce to Mayall who started a niftily turned doubleplay to end the frame.

Apparently sparked by Ellis' antics, the Sox came to life in the dugout in the bottom of the fourth. At the plate, Garrett and Sawyer singled and, an out later, Butler walked to load the bags. Garrett scored on a wild pitch then Fowler balked to bring in Sawyer and send Butler to third. With two down, Bullock bounced a bad-hop single past Ellis for his fourth RBI hit of the game.

Bullock stole second, took third on a wild pitch and scored on a second wild delivery to set the final score.

Bearden needed just 13 pitches to retire the side in the fifth. He fanned two.

The Sox were set to host Lake Hamilton's AA squad tonight. Harrison made sure to remind his team that Lake Hamilton had come to Bryant and won on the second date of the season in 2008, something that has happened repeatedly in recent seasons.