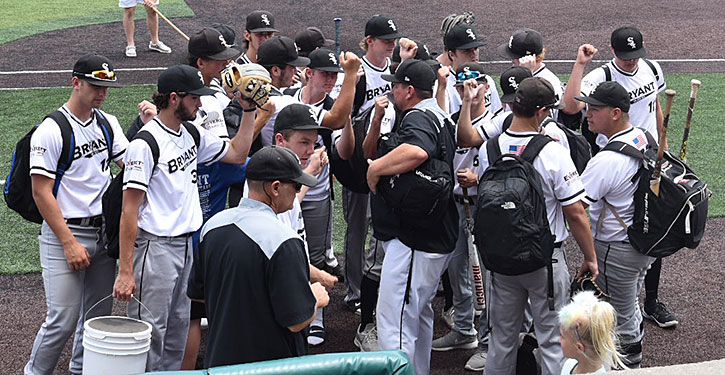 Senior Black Sox wrap up Omaha event with win in 8

OMAHA, Neb. — It was sidewinder overload for the Rapid City, S.D. Hardhats on Saturday as the Bryant Black Sox used submariners Slade Renfrow and Coby Greiner to limit the Hardhats to one run on five hits over eight innings. The Sox wrapped up their stay in Omaha at the Creighton Prep Pre-Regional Senior American Legion tournament with a 2-1 win.

Bryant finished play in the event with a 3-2 mark, with losses of 2 and 1 run.

Rapid City used two pitchers to limit the Sox to just three hits but one of those came in the top of the eighth, a single off the bat of Jake Wright. With one out, Ryan Riggs sacrificed. With Wright on second, Gage Stark hit a grounder to short that was misplayed allowing Wright to score, snapping a 1-1 tie.

Yes, Renfrow, in his first start of the season, had shut out Rapid City through six innings. In the seventh, he struck out the first batter but then hit one. A pop to Noah Davis at short had the Sox an out away from a win.

Though Renfrow balked to put the runner at second, he came back from a 3-0 count to 3-2, a strike away from a complete-game shutout. The batter fouled off a pitch then looped a single to center to tie the game.

Greiner relieved and, after issuing a walk, got the final out of the inning on a fly to Blaine Sears in right.

The game was a scoreless duel until the top of the sixth. Cade Drennan drew a lead-off walk then Wright was struck by a pitch. Riggs sacrificed them to second and third for Stark. He drew a walk to load the bases then Brayden Lester got the run home with a sacrifice fly.

The Hardhats had threatened to score in the bottom of the second with a single, a hit batsman and another base hit. But Renfrow picked up the second out on strikes then got the third out on a fly to Lawson Speer in left.

A hit batsman and a single to start the bottom of the third had the Hardhats thinking of scoring. But a foul pop to Lester at first, an infield fly to Logan Cotton at second, then a fly to Greiner in center kept them off the board.

Lester led off Bryant’s fifth with a swinging-bunt infield hit. Greiner sacrificed him to second then Speer walked. With the top of the order coming around, it looked likely that the Sox would score. But the tough pitching continued. A flout and a pop up followed.

Now 12-5 on the season, the Black Sox return to action at Benton on Tuesday.