SIBLINGS: I have four brothers and sisters. Meagan is 24, Jacob Earls is 21, Brittney Earls is 16 and Hannah Earls is 14.

WHAT DO YOU LIKE TO DO IN YOUR SPARE TIME? I like to watch movies and listen to music.

WHAT WAS YOUR FAVORITE TOY AS A KID? Probably little Tonka trucks I played with.

WHAT ARE YOUR PLANS AFTER HIGH SCHOOL? To be an electrician. I’m going to apprentice with somebody and move on from there.

OTHER THAN YOUR PARENTS, WHO HAS HAD THE BIGGEST INFLUENCE ON YOUR LIFE? Probably Coach (Paul) Calley; he’s just showed me how to lead people and he’s been a real good leader and example.

WHAT’S YOUR FAVORITE THING ABOUT FOOTBALL? Messing around with the guys in football, having fun doing what we do and hitting other people.

WHAT DO YOU FEEL LIKE IS YOUR PRIMARY RESPONSIBILITY ON THE FIELD? To block the defensive line or block a linebacker that’s coming up through the gap.

WHAT DO YOU THINK OF THE SEASON SO FAR? I think it started out pretty rough but we’re starting to straighten it back out and it’s going to look good.

WHEN THE TEAM’S PLAYING WELL, WHAT’S THE KEY TO THAT? We’re all on the same plain, the same line. We all understand what each other’s supposed to do and we all get our job done.

WHAT’S BEEN THE HIGHLIGHT OF THE SEASON SO FAR? I think it’s been the last few weeks, just going 49-0 two weeks in a row then 28-0. It’s been really good.

WHAT’S IT GOING TO TAKE FOR THE TEAM TO BE SUCCESSFUL THE REST OF THE SEASON? Playing the way we have in the past few weeks, playing hard and understanding what we’re supposed to do.

INDIVIDUALLY, WHAT ABOUT YOUR GAME ARE YOU MOST CONFIDENT ABOUT? I feel confident in my pass blocking or pulling around to block somebody because I can get in somebody’s way. I’m pretty big.

WHAT DO YOU WORK HARDEST TO IMPROVE? Probably pass blocking because, every now and then, they get around me and I need to work on that because my quarterback can’t block for himself.

AFTER YOU’RE THROUGH PLAYING FOOTBALL AT BHS, WHAT DO YOU THINK YOU’LL REMEMBER MOST FONDLY ABOUT IT? Probably the guys I’m playing with on the line and just hanging out with them, spending time with them. 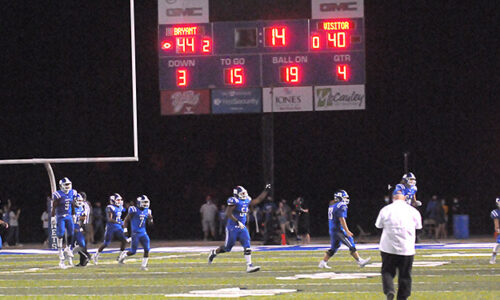