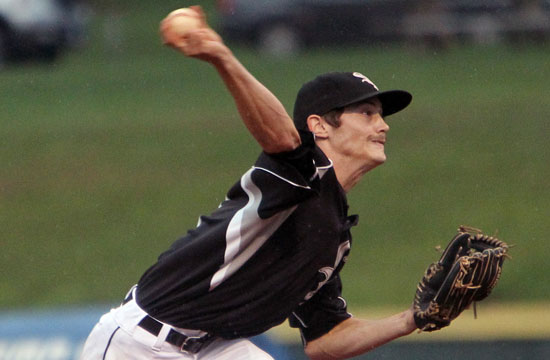 For a team noted for its pitching and defense, the Bryant Black Sox sure do hit it well. 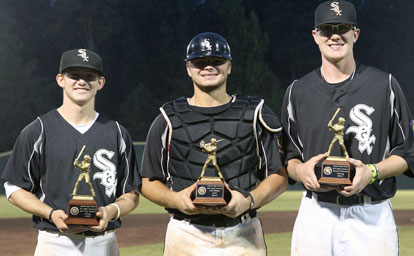 In their five-game sweep of the 2014 Senior American Legion State Tournament, which culminated with a championship after a 14-4 victory over the Jonesboro Ricemen Wednesday night, the Sox outscored their opponents, 68-23, and hit .360 as a team (68 of 189). Their hits included 19 for extra bases.

Their win over the Ricemen was their fourth in which they scored in double digits and their third run-rule victory of the tourney.

Bryant will represent the state in the MidSouth Regional Tournament at Vince DeSalvo Stadium in North Little Rock starting Thursday, Aug. 7. They’ll take a 42-4 record into the tourney with designs on becoming just the sixth Arkansas team since 1912 to advance to the American Legion World Series in Shelby, N.C. (Prior to the game, former Sox coaches Craig and Tic Harrison, who led Bryant to the 2007 World Series and won two other State titles, threw out the ceremonial first pitch.) 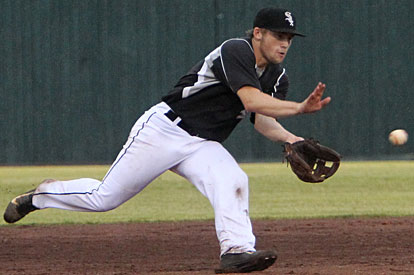 Their Regional opener will be against the Louisiana champions at 4:30 p.m.

The tournament will also include the champions from Tennessee, Missouri, Mississippi, Kansas and Oklahoma along with host North Little Rock.

“We’ll set the rotation up,” said Sox manager Darren Hurt. “Hopefully, we can get Panda (Zach Jackson) well. If we can go out there and keep swinging the bat like this and take a little pressure off our pitching staff, I think we’re going to do well.”

Asked if the week-plus off will affect his team, the manager added, “To tell you the truth, I don’t think it’ll hurt us. I think it might be a good thing. We had to stretch some pitchers to throw a little more than they have, especially H.D. (Harrison Dale). So we’ll give them two or three days off then get back to work and get ready for Thursday.” 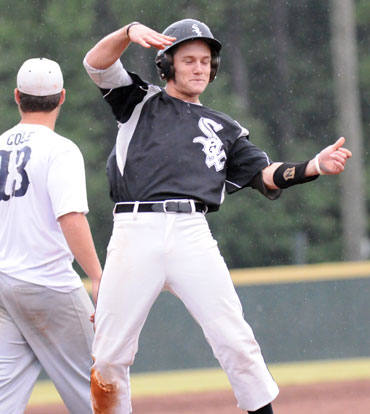 Drew Tipton celebrates after cracking a three-run triple in the fifth. (Photo by Kevin Nagle)

The Sox were playing in the championship round for the fourth straight season. They won the 2012 game. This year, the title was coupled with the State crown won by the Everett Black Sox in the Junior Division. And the bulk of the Sox Senior team was part of the 2014 Class 7A State champion Bryant High School squad.

Bryant manager Darren Hurt acknowledged that the run to the championship in 2014 was born from a bitter disappointment in the 2013 tourney at Mountain Home in which the Sox reached the finals only to be denied in a one-run game against the rival Texarkana Razorbacks.

“I think the guys that were up in Mountain Home last year, absolutely,” he stated. “They didn’t want to have that feeling again coming home. (Because of rain last year), it was decided in the finals of the winners’ bracket to go to a seven-inning game and we lost by one run in that seven-inning game. Then, we were leading after seven in the championship game but they’d gone back to nine-inning games. It was a rough week.

“They don’t like to lose,” Hurt said. “Most of these guys were on the high school team and they got it done there then they just rolled right into Legion and kept doing what they were doing in high school.” 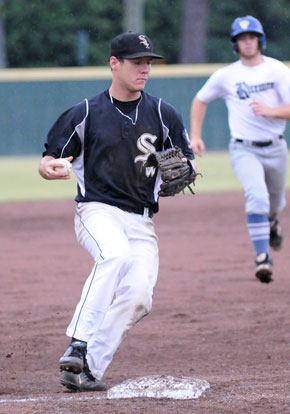 Brandan Warner gets a force at third. (Photo by Kevin Nagle)

Between the two seasons, Bryant has posted a record of 75-6.

Hayden Lessenberry, who was 10 of 22 in the tournament with a team-hit 10 runs batted in, was named the Most Valuable Player by a close call with teammate Blake Patterson who not only went 7 of 21 with nine RBIs but pitched a gem in Bryant’s 5-1 win over Mountain Home Lockeroom in the winners’ bracket final.

Drew Tipton won the hitting award for going 11 of 21 (.524) in the tourney. Nate Rutherford garnered the pitching award on a close call with Dale. Rutherford picked up a win in the title game and pitched well in two others. Dale came through in relief in three contests, quieting opponents’ offense in each appearance.

Wednesday’s game was played in a light rain almost throughout. The Sox, despite hosting the tournament and being a one seed, were the visiting team in each of their games when they lost every coin toss for home-team status.

As had been the case in several of their games of late, they jumped out early against the Ricemen, building a 6-0 lead. The margin grew to 11-1 but Jonesboro, which won its three previous games in dramatic fashion. They held on to beat Fort Smith Kerwins 10-9 the beat Cabot Centennial Bank, 9-8, and Mountain Home, 6-5, in walk-off fashion. The Cabot game went 12 innings.

Arm-weary, the Ricemen used five pitchers in Wednesday’s game but kept battling late as they had all tournament.

Tipton, Dalton Holt and Korey Thompson each had three hits for the Sox. Tipton knocked in four runs while Patterson and Holt chased in three each. 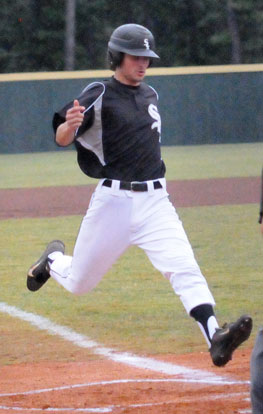 Patterson singled in a pair with two out in the first. Tipton had singled and Chase Tucker had been hit by a pitch before being moved into scoring position on a grounder to the right side by Lessenberry.

In the second, Holt, who busted out of a slump in the tournament going 8 of 18 in the last four games, smoked a liner down the right-field line for a triple to open the second. Thompson raked a single to left to chase him in, making it 3-0.

In the fourth, the Sox gave themselves some breathing room. Holt ignited the outburst again with a single to left. Justin Emmerling was hit by a pitch then Thompson came through with his 13th sacrifice of the season. And when Jonesboro pitcher Tyler Cole couldn’t handle it cleanly, the Sox’ second sacker reached safely to load the bags.

Trevor Ezell came through with a sacrifice fly then Tipton singled up the middle to plate a run. With two down, Lessenberry laced a single to right to bring home a pair.

Rutherford had stopped the Ricemen on three hits through three innings. In the fourth, Mason Gibson singled, Nick Brown was hit by a pitch and Michael Evans beat out a chopper on the infield to load the bases. Rutherford fanned Seth Hart then appeared to be out of the inning when Brandan Warner made a nice play on a ball hit to third. But his throw was errant and Gibson scored.

The Sox quickly turned that 7-1 lead into 11-1 in the top of the fifth with Holt supplying the spark once more with a one-out single against reliever Austin Martin. With two down, Thompson doubled. Ezell drew a walk to pack the bags for Tipton, who cleared them with a drive to the base of the fence in left-center. 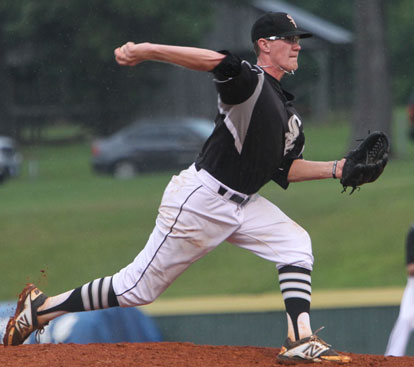 Martin gave way to Tyler Hydrick but two walks followed, loading the bases again. Hart was next in line on the mound but he wound up hitting Patterson to force in the 11th run.

Three singles produced Jonesboro’s second run in the bottom of the sixth. Martin picked up an RBI with his one-out looper to right. Bryant followed up with a doubleplay, their sixth of the tournament.

In the seventh, a one-out error was followed by Dillon Groves’ single to right. With the pitcher’s mound starting to get a little tacky with the drizzle, Rutherford issued walks to Gibson and Brown. Dale relieved and, after a wild pitch allowed a run to score, he retired Cole and Hart to end the threat.

The right-hander wound up retiring all five batters he faced in the game as he close it out.

But it was 11-4 and the run-rule was no longer in effect. At least for the moment.

In the top of the eighth, the Sox used a trio of walks with base hits from Ezell and Lessenberry to score three times, setting the final score and ending the game after eight frames. 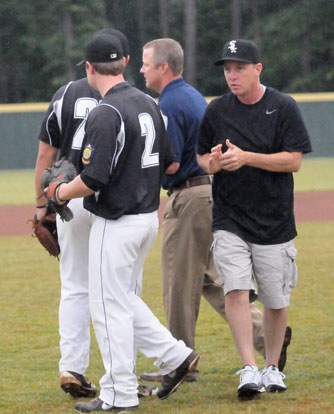