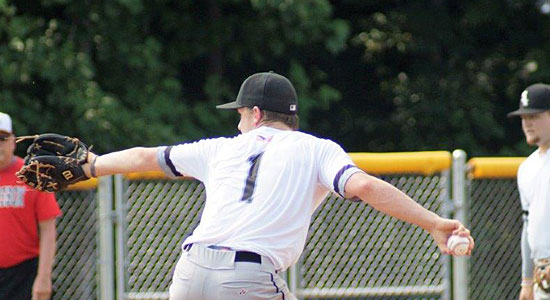 Senior Sox edge Tennessee team on walk-off in the eighth 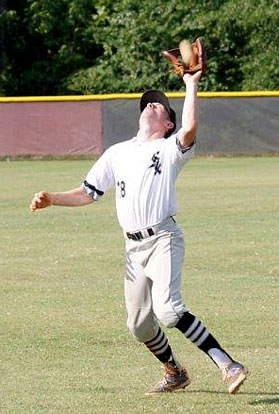 MEMPHIS — With Aaron Orender on second after a throwing error with no one out in the bottom of the eighth, Jake East got a sacrifice bunt down that drew another errant throw by pitcher Hayden Edwards of the Batters Box (DeMarini) 18U team of Collierville, Tenn., on Saturday afternoon. Orender scored and the Bryant Black Sox Senior American Legion team walked off with a 3-2 win at The Hagan, the annual Keith Hagan Memorial All-America Classic.

The win improved the Black Sox to 13-2-1 overall and 2-0 in pool play at the Classic going into a game later on Saturday evening against the Memphis Tigers 18U team.

Side-winder Boston Heil picked up the win in relief of Dylan Hurt who pitched into the fifth. Hurt had shut out the Collierville team through four only to run into trouble in the fifth. The Sox took a 2-0 lead in the second but the Batters Box squad tied it in the fifth. Heil came on to get the final two outs of the inning then blanked Batters Box over the next three innings, walking one and fanning four.

Bryant knocked out the Tennessee team’s starter Turner Lane in that second-inning uprising. Edwards took over and blanked the Sox on two hits through seven before his defense let him down in the decisive bottom of the eighth.

The Sox only managed two hits in the game but benefited from six walks, two hit batsmen and those errors.

Hurt pitched around a walk to Cade Coffman and a one-out double by Ian Bibiloni in the top of the first with Coffman getting thrown out trying to score on the two-bagger by centerfielder Logan Allen.

In the second, Kyle Moore singled to lead off for Batters Box but Hurt and the Sox defense retired the next three, finishing the inning with a strikeout. 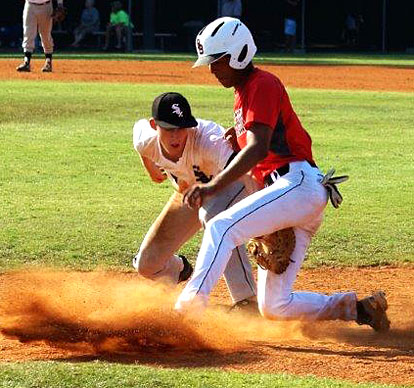 In the bottom of the second, Lane struck out the first two batters but then issued a walk to Seth Tucker, who stole second ahead of a walk to Joey Cates. Tucker and courtesy runner Jeffrey Hastings worked a double steal before Hunter Oglesby worked a walk to load the bags. Tucker scored on a wild pitch then so did Hastings head of walks to Allen and Hurt.

Edwards was called in to relieve at that point and ended the uprising with a strikeout. The new hurler hit East and walked Tucker in the third but, again, wriggled out of the jam.

In Batters Box’ fourth, Brelin Carroll doubled with one out. He advanced to third on a groundout by Bibiloni but was picked off by Hurt to end the inning.

After the Sox were retired in order in the home fourth, Batters Box put together its tying rally. Will Buser and Moore cracked back-to-back doubles to make it 2-1. Hurt got Ridge Riley to foul out to Tucker but, a pitch later, Max Murray doubled in the tying tally.

Heil relieved at that point and induced a pop to East at short and a flyout to Austin Kelly in right to keep it even.

In the sixth, Tucker laced a one-out double to right for the Sox’ first hit of the game. But he was stranded. In turn, Batters Box threatened when Bibiloni was struck by a pitch with one out and Buser singled to left. Moore grounded into a force at second, however, then Heil got Riley to ground out to Misenheimer at third to send it to the bottom of the seventh.

Allen led off the inning with a single, got to second on Hurt’s sacrifice bunt but no further setting up the dramatics in the eighth. 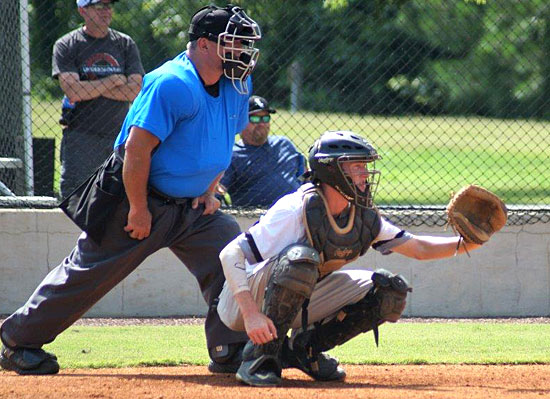