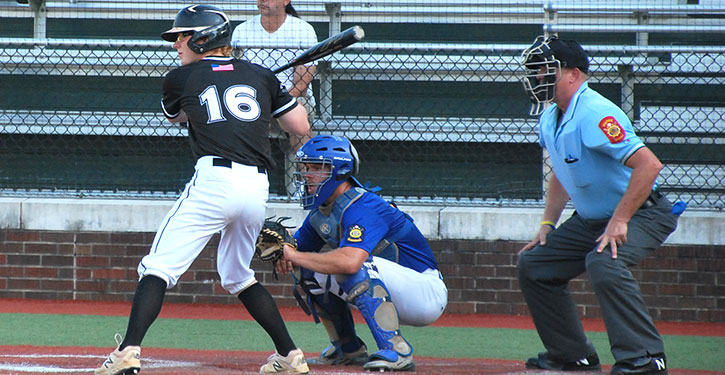 Senior Sox get past Sheridan behind Grant, defense, small ball

CONWAY — The Bryant Black Sox and the Sheridan Yellowjackets played in the finals of the 2018 Senior American Legion State Tournament. But in the 2019 edition, the two rivals played in the second round of the 16-team event.

Like the second-round winners’ bracket matchups between Texarkana and Paragould along with Cabot and Fort Smith, it was a dogfight. Unlike those other two games, however, the Sox didn’t have to go to extra innings to extract victory. That’s thanks to the stellar pitching of right-hander Logan Grant and the solid defense behind him.

They made four runs stand up for a 4-1 victory.

The prize, Bryant now advances to next Friday while Sheridan must come back on Sunday to play an elimination game against the Little Rock Vipers.

On Friday, the Sox will face Batesville, which beat Maumelle 14-4 to remain unbeaten. Game time has yet to be determined but, if this weekend’s schedule is any indication, it’ll probably be at 12:30 p.m., at Bear Stadium at UCA.

Meanwhile, it took eight innings for Texarkana to edge Paragould, 6-5, and 10 frames for Fort Smith to survive Cabot, 8-7.

Grant allowed just four hits, walked only one and struck out two. Sheridan hit him hard on a few occasions, but they went right at Sox’ defenders, who made the plays. The right-hander finished the game with a sizeable blister on the big toe of his push-off foot, persevering through the discomfort.

Meanwhile, the Sox got to Sheridan starter, Logan Mitchell, early, building a 3-0 lead in the first two frames.

Grant pitched around a one-out double by Haydn Finley in the top of the first. In the home half, after Logan Chambers was robbed of extra bases on a deep drive to left, Logan Catton beat out a single on a grounder into the hole at short. Cade Drennan followed with a hit-run single to right.

With two out, Gage Stark singled to make it 1-0. With Drennan at third, Stark took off on another hit and run. Peyton Dillon cracked a hard grounder right through the hole at short, which was vacated early as shortstop R.J. Stinson was covering the bag and left too soon. Drennan scored and it was 2-0.

With the second and third outs of the first, Grant started a string of setting down eight in a row.

In the bottom of the second, Ryan Riggs worked a walk for the Sox. Coby Greiner got a sacrifice bunt down and Chambers plugged the gap in right-center for an RBI double.

Catton drew a walk and Mitchell gave way to Finley, who kept it 3-1 for a while.

A walk to Finley broke Grant’s streak. Moments later, however, Hunter Hicks ripped a grounder to Catton at third, who fired to second for a force in time for second baseman Noah Davis to relay to first for an eye-popping around-the-horn doubleplay.

Finley worked around a two-out single to Davis in the third and a lead-off knock for Greiner in the fourth.

Sheridan scored its run in the fifth. With one out, Zach Motsinger slapped a single to right. He went to second on a wild pitch and was balked to third. Woody Raines belted a double inside the bag at first and it was 3-1.

Grant, with the blister starting to form, got Nathan Kirkpatrick to foul out to Drennan, the Sox’ catcher. Dalton Domrase followed with a lined shot that Davis snagged with a lunge to his left, ending the threat.

Sheridan threatened again in the sixth when Stinson singled and, with one out, Hicks was hit by a pitch on a 1-2 count.

Layne Hartsfield hit a sharp grounder to Chambers at short and he was able to make a solid throw to Davis for a force at second as Stinson went to third.

But he got no further. Hartsfield stole second but was stranded when Montana Korte drilled a liner to center that appeared to be taking off as Greiner sprinted in then had to make a leaping catch to keep it 3-1.

Bryant tacked on an important insurance run in the bottom of the sixth. Davis drew a lead-off walk. He took second on a wild pitch as Riggs tried to sacrifice. Moments later, Riggs pushed a bunt at the third baseman. Not only did it get Davis to third but, when Raines was unable to come up with it cleanly, Riggs had a bunt hit.

On the very next pitch, Greiner dragged a bunt up the first-base line that got Davis home with Bryant’s fourth run. Finley fielded the ball in front of Hicks, charging in from first, and tagged Greiner himself.

Chambers walked as Finley pitched around him. Catton followed with an infield fly that was dropped by Motsinger at second. But the infield fly rule had been cited by the umpires and he was out. Drennan flew out to center and it went to the seventh.

Grant retired the side in order on 12 pitches to nail down the victory. In going the distance, he threw 95 pitches, 10 below to mandatory limit.