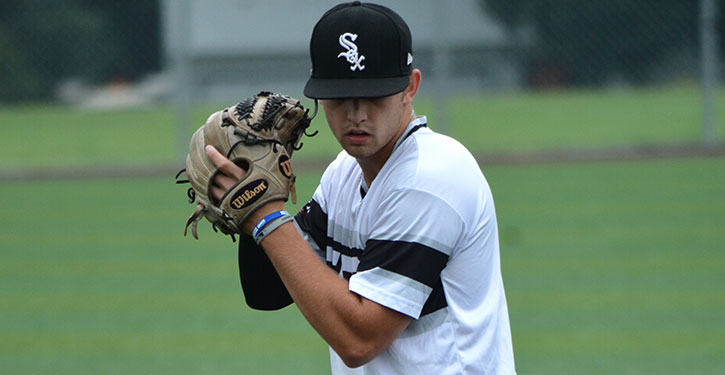 CONWAY — If the Bryant Black Sox can win two games on Tuesday like they did on Monday, they’ll be headed to New Orleans and the MidSouth Regional Tournament as Arkansas champions.

They’ll have to beat Sheridan twice, starting with a game at 5 p.m., at Warrior Field on the campus of Hendrix College, the site of their State title victory, a year ago.

On Monday, the Sox ousted the Little Rock Vipers, 11-3, and Fort Smith Sportsman Athletics, 5-3. They’ve come all the way back through the losers bracket of the tournament, after falling to Fort Smith 10-1 on the first day on Friday. They’ve since won four games in a row.

The win over Little Rock avenged a loss to the Vipers in the zone tournament finals. The win over Fort Smith, obviously, avenged their tournament-opening setback and continued the Sportman team’s frustration against Bryant at State in recent years.

With Sheridan, the Sox take on the last unbeaten team in the tourney.

“Heck, when you come this far, why not go ahead and go to New Orleans?” said Sox manager Darren Hurt after the win over Fort Smith.

Clean-up hitter Cade Drennan had a day for the Sox, going 5 of 8 with five runs batted in and two scored. Against Fort Smith, he broke up a scoreless deadlock with an RBI single in the top of the sixth. The next inning, he capped a three-run uprising with a two-run double that gave Bryant the cushion to hold off a Fort Smith rally.

“He just keeps squaring the ball up,” said Hurt. “I mean everything he hits.

“I don’t call anybody an MVP,” he added, “but what he has provided for us in the middle of that order, extra-base hit after extra-base hit. And not only that. He comes through in big situations. Runners in scoring position, he just always seems to come through. He has been huge for us this summer. Not that I didn’t expect him to be good, but I didn’t expect him to be my four-hole hitter and be clutch like he is. He’s turned it on.”

The Sox also benefitted from tremendous pitching in the two games. In the first one, Logan Grant, worked six innings, using 104 of the pitch limit of 105. Scott Schmidt closed it out in the seventh.

In the second one, Will McEntire blanked Fort Smith for six frames extending the Sportsman’s frustration to 13 innings without scoring with Sheridan’s 1-0 win on Sunday.

They broke through in the bottom of the seventh and got the tying run to the plate. Myers Buck, after giving up a pair of RBI singles, closed it out in relief.

“LG was really good today,” Hurt commented. “He gave us what we needed. He ran out of pitches, but he threw really well today. Then Mac was phenomenal tonight.

“The plan was not to go to Buck then, when we got the 5-0 lead, we decided to throw him a few pitches and kind of treat it like a ‘pen to get ready for tomorrow,” he explained. “Now, we could use (Coby) Greiner in both games tomorrow. If we had gone to Greiner — and we had him ready — by not pitching him, he could actually come in and close both games tomorrow.

“We were still trying to save pitching as crazy as that sounds,” Hurt said. “We need as many arms tomorrow as we can get.”

McEntire and Fort Smith’s Evan Jones (Van Buren High School) dueled through five innings. Fort Smith was blanked on four hits while Bryant was shut out on five. Fort Smith had three doubleplays in the first four innings to help keep Bryant off the board.

In the top of the sixth, Logan Chambers drew a lead-off walk. Logan Catton sacrificed him to second then Jake Wright drew a walk to bring up Drennan. On a 2-0 fastball, he shot a single to center to give Bryant a 1-0 lead.

Buck then executed the squeeze play to get Wright home, making it 2-0.

McEntire, who fanned five and walked three, kept the first-pitch, fast-ball hitting Sportsman off-balance with first-pitch breaking balls for strikes. Given the lead, he retired the first two in the bottom of the sixth before Ryan Daggs belted a ground-rule double to left. But he was stranded when Max Frazier grounded out to Chambers at short.

In the seventh, Matthew Sandidge led off with a single for Bryant. Peyton Dillon got a bunt down, trying to sacrifice, but Jones made a nice play to get the force at second. On a 1-2 pitch, Greiner socked a single to left.

Chambers popped out, but Catton was hit by a pitch to load the bases. Dillon scored on a wild pitch and, after Wright walked to load the bases, Drennan greeted Fort Smith reliever Ben Klutts with a shot just inside the bag at first that went for a two-run double and the 5-0 lead.

McEntire was up to 95 pitches going into the seventh. Jackson Scrivner hit his 97thpitch down the left-field line for a double. Jones singled in the first Fort Smith run of the game then a walk spelled the end of McEntire’s night on the mound as he reached 106 pitches.

Buck came in to relieve and surrendered an RBI single to Cash Balentine. But Brock Thibodeaux hit a sharp grounder to Catton at third. He stepped on the bag and fired to first just in time to nip Thibodeaux for a huge doubleplay.

Klutts singled to make it 5-3. Buck then ended the game by getting Mac Moody to bounced to Chambers at short. He tossed to Schmidt at second for the final out.

“We knew it wasn’t going to be easy,” Hurt acknowledged. “And every time we play those guys, it’s almost like the team that’s behind is the favorite. Us, last year, coming back and getting them — it seems like we always meet them at some point in the State tournament late and it’s always a game like that. And we survived it.”

The top five in the Bryant line-up, Chambers, Catton, Wright, Drennan and Buck combined to go 10 for 18 at the plate with 10 runs scored and five knocked in. Catton had three hits.

Facing River Hunt, the right-hander who beat the Sox in the “if” game in the championship round of the Zone tournament on Sunday, July 22, surrendered five consecutive hits to the Sox in the bottom of the first, leading to a five-run uprising. In the second, Bryant got five more as Hunt had to give way to Jacob Wagner.

Chambers singled to start the home first. He stole second then Catton got a bunt down for a hit. Catton stole second then a wild pitch allowed Chambers to score. With Catton on third, Wright belted a shot off the fence in left for an RBI triple. Drennan singled to left and it was 3-0.

Buck’s base hit then a wild pitch put runners at second and third. After Schmidt lined out to center, Sandidge hit a grounder to Shelby Quiggans at first. With Drennan breaking for the plate from third, Quiggans fired home only to have it short-hop Nick Jones the catcher.

Drennan scored and, when the ball ricocheted off the backstop up the third-base line, Buck came in as well to make it 5-0.

In the second, Little Rock’s Kyle Clayton walked with one out. Andrew Howard’s single was misplayed in the outfield, resulting in runners at second and third. Quiggans delivered a sacrifice fly to get the Vipers on the board but Grant struck out Grayston Troutman to end the inning.

Chambers led off the second, just had he had the first, cracking a single, this time to right. He stole second then took third when Catton smacked a base hit to left. Catton swiped second as Wright was working a walk to load the bases for Drennan, who came through with an infield hit and an RBI. Buck followed with a two-run single to left, making it 8-1, and chasing Hunt off the mound.

Wagner was greeted by Schmidt, who bunted for a hit to load the bases again.

Sandidge followed with a lined shot to Quiggans at first. He caught it but then dropped it. The Vipers proceeded to turn it into a triple play to end the inning.

On review, however, the umpiring crew got together and, at Hurt’s suggestion, decided that Scoggins had dropped the ball on purpose. Thus, it was a catch and the inning continued.

Wagner walked Dillon to force in a run then Greiner executed the first of his two squeeze bunts in the game, bringing in Buck with the 10thrun for the Sox.

Quiggans singled in a run with two out in the fourth to make it 10-2 then Ryan Lumpkin singled, Michael Covin doubled, and Jones picked up an RBI with a grounder to second as the Vipers whittled another run off the deficit.

Bryant got that back in the fifth off Lumpkin, the third Little Rock pitcher. Dillon singled and, on an errant pickoff throw from the catcher, raced all the way to third. Greiner squeezed him in and the final score was on the board.

Grant finished up his work on the mound with a pair of strikeouts and, after a walk, a groundout in the top of the sixth.

Schmidt allowed a two-out infield hit but a pop to Chambers at short ended the game.