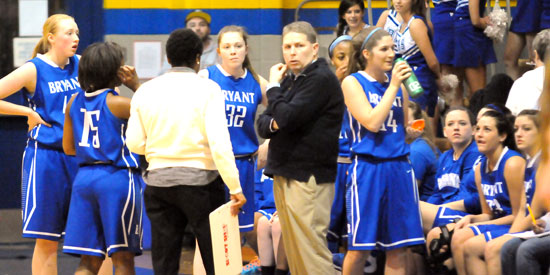 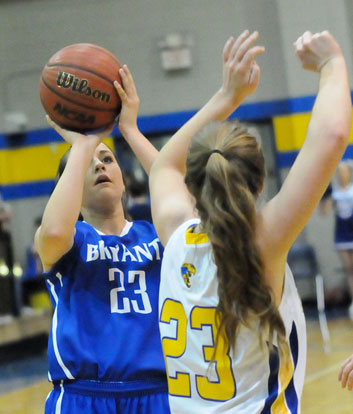 SHERIDAN — When the Bryant Lady Hornets led by as much as 17-4 in the first half and never trailed before the intermission after being down 2-0, they went to the free-throw line on four occasions, while the Sheridan Lady Yellowjackets were making two trips to the stripe.

In the second half, despite the fact that Sheridan was playing more aggressively and the Lady Hornets pretty much the same as they had in the first, Bryant didn’t get to the line at all until the 2:54 mark of the fourth quarter. And even then, it was for a technical foul and not a common foul.

A visiting team gets few breaks on the road.

Sheridan took advantage with a trio of 3-point baskets and two old-fashioned three-point plays in the second half to rally for a 56-51 win on Tuesday night at Oliver Williams Gym.

The Lady Jackets took the lead on the third 3-pointer of the game by Ashton Hill with 2:17 left in the third period and eventually led by as much as 9 before the Lady Hornets put together a comeback that trimmed that advantage to just 1 twice. The last time was with :56 left.

Sheridan’s Kadesha Cooper, who scored a game-high 22 points, converted two free throws with :23 left. After the ball was raked out of the hands of Bryant’s Aubree Allen on her drive toward the basket at the other end, Lauren Mitchell, who finished with 4 points, clinched the game with two free throws with :02.9 to go. 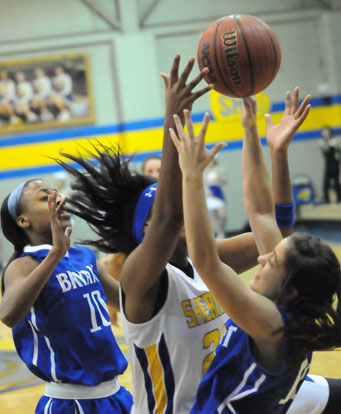 As tough a loss at it was, Bryant head coach Brad Matthews praised his team.

“I thought our kids really competed,” he said. “I thought we played well, especially the first half. We made some shots early and I think that relaxed us. We executed our game plan a lot better than we had been.

“You know, losing’s not good and we can’t accept that but I think we did a lot of things that we can build on,” he continued. “I thought we executed well for the most part. We gave ourselves a chance to win on the road. But give Sheridan credit, they made a few more plays down the stretch than we did.

“But I’m really proud of our kids’ effort,” the coach emphasized.

Bryant was rolling early in the game. After Hannah Schultz scored for Sheridan, the Lady Hornets went on a 17-2 run that started with an offensive rebound bucket for Aubree Allen, who would go on to score 16 points to go with eight rebounds.

Cooper hit a jumper in the lane to interrupt, making it 6-4 but Bryant senior Peyton Weaver then put together a 10-point burst. She converted two free throws then drained back-to-back 3-pointers. After Rachel Miller hit a free throw, Weaver pulled up a drive and knocked down a 10-foot shot to make it 17-4. 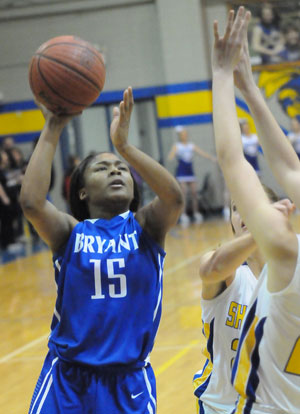 Sheridan came to life when Hill knocked down her first two triples. In turn, Weaver fed Allen inside but Cooper drilled a 3 to cut the lead to 19-13.

But the Lady Hornets stayed in control. Allen added a jumper off a nice feed from Jayla Anderson and it was 21-13 going into the second quarter.

After Cooper scored the first basket of the new period, Otey sparked the Lady Hornets as they pushed the lead to 27-16. Sheridan scored just one point, a free throw by Madalynn Allbright during a drought of nearly seven minutes.

The Lady Hornets had a chance to push the lead to double digits again but, on a hotly disputed call, Anderson was called for a charge. Sheridan took advantage as Kendall Lucas grabbed the rebound off a teammate’s miss and scored her lone bucket of the game.

After Otey couldn’t get either of her two free throws to fall with :25.2 showing, Cooper buried the second of her three treys to make it 27-21 at the half.

“We’re were trying to limit Cooper as much as we could,” said Matthews, who deployed his team in a box-and-one defense early in the game. “She may be the best player in the league. I thought, for the most part, we did it. We did it really well early.

“But once she made a shot I thought she gained some confidence,” he noted. “She was really aggressive at times. She made some plays. (Hill) stepped up and made a few shots for them, just enough to keep them in it.”

Otey drove for a basket to start the second half but Cooper answered with a three-point play. Otey pulled up in the lane off a drive and scored again and, at the other end, the Lady Hornets forced a bad shot. But Brittney Johnson rebounded and scored.

Allen missed and Johnson followed her own miss to score again, cutting the lead to 3. Allen and Schultz traded baskets but, trailing 35-30, Sheridan pushed into the lead. Cooper drained a 3 then made a steal and a layup. Another Bryant turnover resulted in Hill’s 3 that put her team ahead to stay.

But baskets by Weaver and then Allen trimmed the lead to 1 going into the final period. The teams traded baskets as the Lady Hornets kept cutting it back to a point before Kaylee Stewart, who had yet to score in the game, got a 3 to go with 5:38 left.

Mitchell hit two free throws then Schultz produced a three-point play that made it 52-43, Sheridan’s largest lead of the night.

After a timeout, the Lady Hornets put together an answering surge. Allen scored and, after a Sheridan miss that Annie Patton rebounded for Bryant, Allen had her shot blocked by Cooper, who was hit with a technical foul when she taunted Allen.

With 2:54 to go, Otey converted both free throws and, on the subsequent possession, she drove for a hoop as the lead dwindled to 4.

That led to Otey’s triple with :56 to go that trimmed the margin to one, one last time.

The Lady Hornets dropped to 5-9 overall and 1-3 in conference play. They’ll be home on Friday against Texarkana.