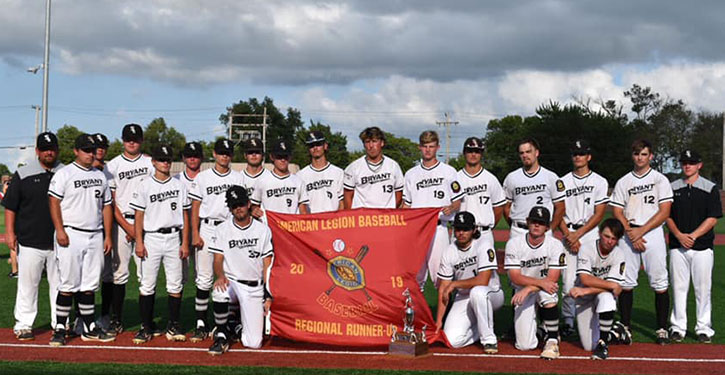 HASTINGS — A six-run fifth inning erased the Bryant Black Sox 2-1 lead and lifted Festus, Mo., to the championship of the Mid-South Regional Tournament and a trip to the American Legion World Series in Shelby, N.C., with an 8-3 victory on Sunday afternoon.

The Sox, who lost to Festus, 2-1, on the second day of the tournament, battled back to reach the championship game by eliminating Texarkana, Texas; Fremont, Neb.; and host Hastings, Neb., before running into Festus again on their second game on Sunday.

With the lead, Bryant had opportunities to add on and, after the Festus outburst in the fifth, had chances to whittle further into the margin. The Sox outhit the Missourians 14-10 but stranded 11 and lost three runners on the bases.

The Arkansas champion for the third year in a row, the Sox finish the season 30-11, a win short of making their second trip to the Legion World Series in the last three years.

The tale-tell fifth-inning eruption started with a single by Jacob Bridges against Bryant starter Slade Renfrow. Bridges stole second and scored on Jordan Duncan’s single to left. Duncan took second when the throw from the outfield missed the cut-off.

Tyler Owens relieved Renfrow and was greeted by Levi Ebersoldt’s single to left. With runners at the corners Colby Ott worked a walk to fill them up.

Still, with no one out, the Sox appeared to have a force at the plate on an infield grounder by Jake Leitner, but the throw was in the dirt and all hands were safe. Festus had its first lead of the game, 3-2.

Bates made a bid to get out of the inning at that point as he struck out Eddie Martin and Charlie Pratt, bringing up eight-hole hitter Isack Hamilton. On a 1-1 pitch, Hamilton singled to left and when the ball was misplayed in the outfield, it cleared the bases making it 6-2.

Pinch-hitter Brendan Smock singled to left to make it 7-2 before Bates got Bridges to fly to left to end the inning.

With one out in the bottom of the inning, Jake Wright drew a walk for the Sox. Gage Stark, who, along with Wright, had three hits in the game, drilled a single to right. Noah Davis was hit by an 0-1 pitch to load the bases with one out.

But the Sox got just one run. Logan Grant beat out a hit into the hole between first and second that the Festus second baseman flagged down, preventing further damage.

Ryan Riggs made a bid for another hit but his fly to left was flagged down by Ott. With the runner at third tagging to try to score, Ott threw to the plate in time for a rally-killing doubleplay.

Bates pitched out of a bases-loaded jam in the top of the sixth and, in the home half, the Sox, now trailing 7-4, threatened again. Two-out singles by Logan Catton and Cade Drennan put the first two on. Wright followed with a tapper between third and the mound that he beat out for a hit to fill the sacks.

But Festus starter Jeremy Iserman got a strikeout to end the threat.

Despite giving up the 14 hits, walking two and hitting a batter, Iserman went all the way for the victory. The game ended on his 103rd pitch.

Festus used a two-out walk, a stolen base and two-strike single by Duncan in the top of the seventh to set the final score. The Sox were retired in order in the bottom of the inning.

Bryant had taken a 2-0 lead in the bottom of the first. Wright’s two-out triple plated Catton, who had walked to put the first run on the board. Stark’s infield hit made it 2-0.

After a 1-2-3 first, Renfrow pitched in and out of trouble. In the second, Ott singled but was forced at second on a grounder to Chambers at short by Leitner. Martin walked then Pratt singled to load the bases. But Hamilton grounded into a doubleplay to end the threat.

Likewise, Bryant loaded the bases in the bottom of the inning but could not add on. Grant and Coby Greiner singled and, in between, Riggs reached when his sacrifice bunt drew a throw that pulled the first baseman off the bag.

Chambers followed with a lined shot that was speared at first by Ebersoldt, who doubled up Greiner. Catton bounced out to second and it remained 2-0 into the third.

Festus got on the board in the top of the third. With one out, Bridges was struck by a pitch and stole second. Duncan singled him to third and Ebersoldt came through with a sacrifice fly.

Ott walked but Renfrow got Leitner to groundout, preserving the lead.

One-out singles by Wright and Grant went for naught for the Sox in the bottom of the third when, with two down, Wright was caught trying to steal third.

It looked like Renfrow might be settling in during the fourth. He worked around a two-out walk to Hamilton.

After the Sox left runners at second and third in the bottom of the fourth, Festus started its fifth-inning outburst.