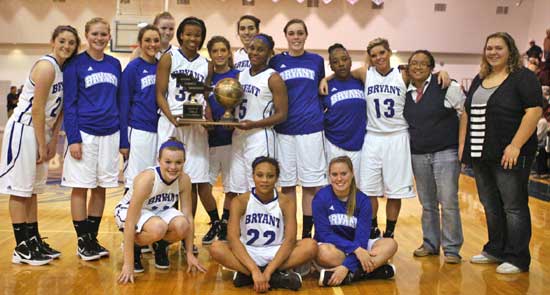 With junior point guard Kiara Moore on the bench with a couple of early fouls, Bryant Lady Hornets guards[more] Logan Davis, Callie Hogancamp and Dezerea Duckworth started looking inside to sophomore Taneasha Rhode in the second half of the second quarter Friday night. 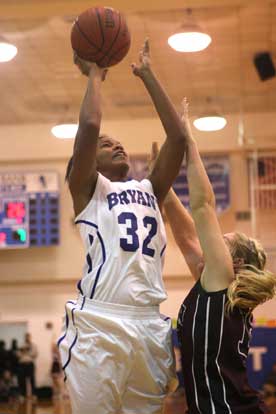 Rhode responded with 8 points of a 12-2 run as the Lady Hornets opened up a lead they never relinquished against the Benton Lady Panthers at the Hornets Nest.

Rhode wound up with 19 points, 10 rebounds and three steals in the game as the Lady Hornets completed a sweep of their rivals in 2011, 53-38. In the process, they captured the Saline County Shootout trophy once again this season. It was the ninth win in a row for the Lady Hornets in the rivalry, dating back to 2006.

“You know, our kids have played eight games in the last 16 days, two tournaments on the road,” reminded Bryant head coach Brad Matthews. “Our kids are working hard in practice. They’re playing hard. We need a break right now and this was a great way to go into one. Anytime you can win two in a row like we have and, especially, beat Benton right before Christmas, I think it’s a good way to wrap up this section of our season.”

The win came on the heels of a 64-46 triumph at Lake Hamilton on Tuesday. The Lady Hornets, now 7-4, will not return to competition until they take on Hot Springs Lakeside in the first round of the ninth annual Summit Bank Spa City Shootout in Hot Springs on Wednesday, Dec. 28.

“Last time we played them, we pressured them a little bit more,” Matthews noted. “But when we got into foul trouble so quick tonight — we had the plan to do the same thing — we kind of had to change our plans there a little bit, change the way we went at them. We did some junk the first time we played them, box-and-one, triangle-and-two. But tonight it was all man, which really helps our rebounding. Everybody has a responsibility there. I thought that was an important thing tonight.We still had some breakdowns here and there but I thought we did a good job of limiting them to one shot.” 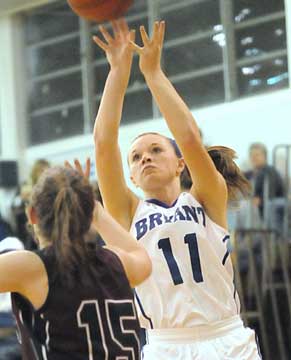 The Lady Hornets out-rebounded the Lady Panthers 33-30. Haley Murphy hauled down six boards for Bryant which held Benton to 22 percent shooting from the field (10-of-46).

To go with Rhode’s big night, Moore came back and added 12 points including 8 in the fourth quarter. Davis finished with 9 points and Duckworth had 6. The Lady Hornets also got three points and three rebounds — on three consecutive Benton misses in the final period — from Courtney Davidson.

“Benton’s a good team,” he added. “They’re going to win a lot of games in their conference.”

Bryant got out to a 7-1 start on a 3 by Moore, a baseline jumper by Davis and a stickback by Murphy. But Benton, sparked by Brooks, rallied and when Parker drove to baseline for a bucket with :43 left in the opening quarter, the Lady Panthers were up 10-7. 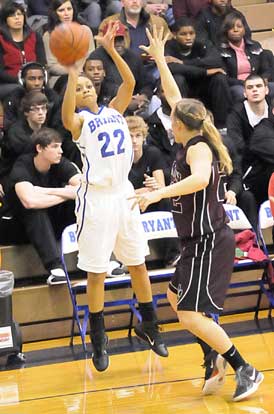 A driving jumper by Duckworth made it a one-point lead going into the second period.

Hogancamp opened the second with a pair of free throws, giving the Lady Hornets a lead they would not relinquish. Rhode followed up with a three-point play.

Still, when Carman King hit a 3-pointer for the Lady Panthers at the 4:12 mark, it was 16-15. And Benton had a chance to regain the advantage only to have Rhode make a steal that she turned into points. After Parker misfired, Rhode took a lob into the post and hit again to make it 20-15.

Benton trimmed it to 28-21 by the half on a basket by Haley Bryant and two free throws by Allison Reynolds.

“I tell you, it was a team effort tonight for us,” Matthews said. “To be up 7 at the half and Kiara in foul trouble, I think that’s just a tribute to our other kids stepping up, a next-man-up type of thing, the next person up making plays. 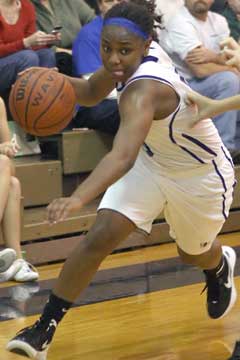 “Taneasha Rhode really did well in that quarter,” he continued. “She had a big spurt for us offensively. She got out, scored some buckets, got some steals, got a bunch of rebounds for us.”

To start the second half, Rhode hit the offensive glass for a basket and Benton head coach Jerry Chumley was hit with a technical foul. Davis converted one of the free throws but a flurry of turnovers ensued. And, on one defensive trip, the Lady Hornets were cited for three fouls in rapid succession.

With 5:40 left in the third, Parker hit a field goal off an inbounds play. As it turned out, the Lady Panthers would not be able to muster another field goal until on :46 remained in the game.

They stayed in the game by converting at the free-throw line. Bryant’s lead going into the final period was 32-26.

But that’s when Rhode went back to work, scoring consecutive baskets inside. Moore then made a steal and resulted in a trip to the line where she converted once to make it 37-26.

Free throws by Million and Brooks whittled the margin to 37-30 with 5:24 left but Moore made a drive down the lane, scored and was fouled. The three-point play bumped the margin to 10 again. It was, also, Benton starter Boo Gately’s fifth foul as she became the first of three to foul out.

Brooks countered with a pair of free throws but the 8-point margin at the point was as close as the Lady Panthers would get after that. Moore, Davidson, Davis and Duckworth made free throws down the stretch that had Bryant up 51-38. And when Rhode converted a pair of with :10 showing, Bryant had its largest lead of the game.