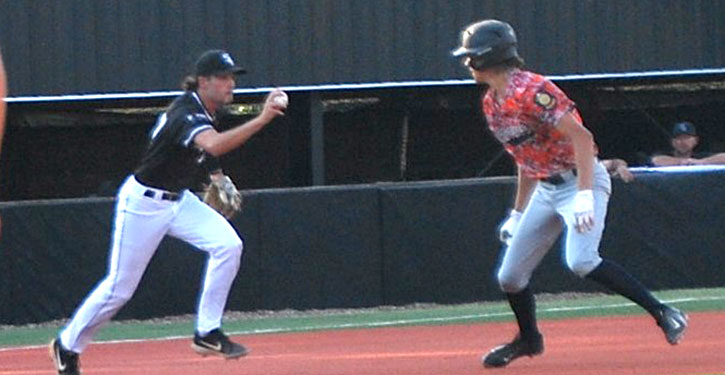 Sox rally to advance to championship round at State

Fort Smith would score then Bryant would answer but Fort Smith was clinging to the lead. An early 4-0 deficit for the Sox had been whittle down to 6-5 going into the bottom of the sixth inning.

Fort Smith’s tough lefty Carson Cheek of Poteau, Okla., had retired the first two of the inning, and appeared to have the final out but an error at short allowed Coby Greiner to reach base safely.

That opened the door to a wild inning in which the Sox rallied to take an 8-6 lead that Greiner, on in relief, made hold up by striking out the side in the top of the seventh.

Bryant will play for a third consecutive State title on Sunday at 2:30 p.m., against the survivor of Sunday’s noontime elimination game between Paragould Glen Sain GMC and Fort Smith. If the Sox lose, they’ll go to Monday at 6 p.m., in a winner-take-all finale.

After Greiner reached on the error in the bottom of the sixth, Logan Chambers grounded a single up the middle. Greiner raced to third and, when Fort Smith missed the cutoff man, Chambers scooted into scoring position at second.

With Logan Catton at the plate, Cheek threw a wild pitch on which Greiner scored the tying run. Chambers rounded third and, when he saw that the ball had ricocheted away from Fort Smith catcher Clay Cross, he sprinted home. On what appeared to be a bang-bang play at the plate, Chambers slid headlong at the plate. With Cheek trying to cover home, Cross threw back to him errantly to make it 7-6.

Catton walked and, after Gabe Fennell relieved, he was on the move, stealing second. Two pitches later, Cade Drennan cracked an RBI single up the middle to make it 8-6.

It was Drennan’s third hit of the game after going hitless in the tournament before that.

Greiner, who had pitched out of a jam in the top of the fifth, fanned the side to made the Sox winners.

“There were so many breaks on (the play) because the ball bounces a little bit weird, the catcher’s blocked by the umpire — I mean everything’s happening,” Hurt reviewed. “When we first go, it was Greiner that took off, I wasn’t even sure we should be going there. The next thing you know, he’s definitely going to be safe then I see the throwback and they’re sending Chambers home and I’m going, ‘Here we go. This is going to be close.’

“It was exciting, but you’ve got to give our guys some credit on a play like that,” he added. “Chambers didn’t just take it for granted that ‘I’m just going to go to third,’ just taking for granted that he’s going to make it to third base. He left second thinking, ‘I want to score.’ Most kids don’t do that — most teams. But I think our guys kind of get some advantages because of that.”

Logan Grant, who was so splendid in Bryant’s 4-1 win over Sheridan last weekend, wasn’t quite as sharp on Saturday. He surrendered four runs over the first three innings. But he forced Fort Smith to strand runners.

“They left on so many guys early,” Hurt noted. “And that’s what I told L.G. ‘You didn’t have your best game today but what you did was you got us out of some jams. And we created those jams a lot of times on our own.”

“Not L.G. — L.G. didn’t create them, we did,” he continued. “Then we were able to get out of those jams with it only being one or two runs. There were several innings where it looked like it might be a four or five spot.

“We were able to keep ourself in the game and just keep ourself within striking distance so that, when we were getting one or two here, one run at a time, we stayed on their heels and kept pressure on them,” the manager explained. “That was the main thing.”

Fort Smith broke out to a 2-0 lead in the first inning. Slugger Ryan Daggs poked a checked-swing single to right and Landrey Wilkerson ripped a single up the middle. Colton Sagely picked up an RBI with a grounder to first then, on an 0-2 pitch, Colton McBride stroked an RBI single to center.

In the top of the third, Daggs and Wilkerson each singled again and, with one out, McBride doubled to make it 3-0. With two away, Dakota Peters hit a hot grounder to Catton at third. With McBride running towards third, Catton tried to quickly tag him out but, by the time he did, Wilkerson scored to make it 4-0.

Both Fort Smith manager Trey Priuer and Hurt protested on the play. Priuer claimed that Catton had missed the tag while Hurt argued that the run had not scored by the time Catton got the tag on.

After Cheek had retired the first six Bryant batters in the game, Noah Davis led off the bottom of the third with a hot shot that nearly de-cleated Cheek.

Perhaps rattled a bit, Cheek walked Ryan Riggs then Coby Greiner to load the bases. With one out, Davis scored when Catton tapped out to short.

That set the stage for Cade Drennan to bust out of his oh-fer-the-tournament slump with a shot to left-center for a two-run double that made it 4-3. Jake Wright followed with a lined shot that carried out to center for the third out.

“We wanted to put pressure on them but what we didn’t anticipate was what they did early in the game to get ahead of us,” Hurt related. “So, we had to kind of cut back on some of the aggression that we wanted to use. The game plan basically got thrown out the window.”

For Fort Smith in the fourth, Pacyn Reames beat out an infield hit, raced to third on a double by Cross then scored on a sacrifice fly by Daggs.

The Sox kept pace but just couldn’t claim a lead. In the bottom of the fourth, a two-out walk to Davis led to a run when Ryan Riggs slapped one inside the line in left for an RBI double to make it 5-4.

In the top of the fifth, Sagely led off with a triple then scored on a wild pitch before Grant was able to settled down.

In turn, Chambers led off the bottom of the first with a double. With one out, Drennan singled him in and it was 6-5.

“There are so many guys to talk about,” Hurt said. “The hit that Riggs got that scored Noah from first base. How big was that now? And not just his. I mean, you can go right down the list. Drennan hitting a double, scoring a guy from first. It was big time.”

Grant started the top of the sixth and recorded an out before issuing a walk to Breck Burris. Greiner relieved and walked Cross.

But he got Daggs to pop to Davis at second then, on what may have been a game-saving play, Peyton Dillon made a sprawling stop on Wilkerson’s hot grounder to the right side. Greiner then did a splendid job to make the catch at first as he covered the bag to end the inning.

That set up the Sox’ ultimate rally to gain the lead.