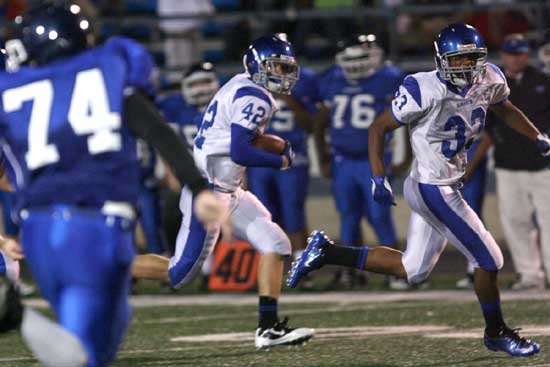 CONWAY — Drew Tipton and Matt Shiew each returned an interception for a[more] touchdown as the Bryant Hornets freshman team scored in just about every which way on the way to a 36-0 victory over the Conway Blue Wampus Kittens Thursday night on Centenial Bank Field at John McConnell Stadium. 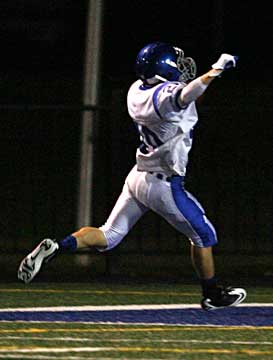 The picks by Tipton and Shiew were two of Bryant’s three interceptions on the night. The other was confiscated by Bryce Hardin.

The win was also highlighted by Brushawn Hunter’s 93-yard return for a touchdown on the kickoff to start the second half. Quarterback Brandon Warner threw for a score and ran for another in the game that ended after the Bryant reserves drove to the Conway Blue 6. Quarterback Madison Schrader took a knee twice there including on fourth down. Conway ran one last play as time ran out (with the mercy rule in effect).

Warner, who completed his first five passes in the game, finished 7 of 10 for 130 yards with six of those receptions and 127 of those yards to K.J. Hill. Even the three incompletions by the Hornets quarterback were on target.

Bryant actually only snapped the ball on offense 11 times in the first half yet led 23-0. 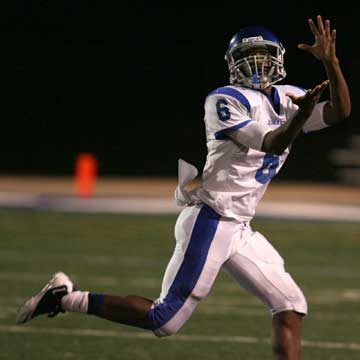 At first, it looked like the Hornets would really be challenged by the Kittens who took the opening kickoff and marched from their own 28 to the Bryant 8 mostly on the strength of the running of tailback Karlil Johnson. He picked up 33 yards on his first six carries and quarterback Grant Ellis contributed two of his three completions for the game along the way.

The Hornets started to get a bead on Johnson once the drive reached the 15. Austin Trusty dropped him for a loss of a yard only to have a face mask penalty take the Kittens down to the 8. But, at that point, Johnson seemed to meet Bryant middle linebacker Brendan Young everywhere he turned. Young dropped him for no gain and, after a penalty moved the Kittens back to the 13, Young smacked Johnson down for a loss of a yard.

On third and goal from the 14, Conway Blue went to the air and Ellis appeared to have found Johnson for a touchdown only to have safety Ty Harris get there in time to knock the ball away. 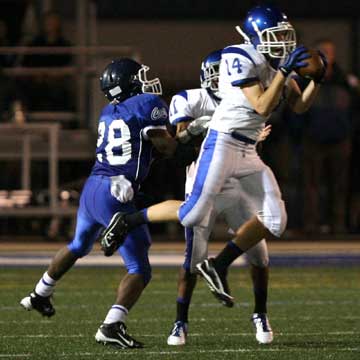 The Kittens tried a field goal from there and it was short and may have been partially blocked by Tipton.

The Hornets’ first drive moved from their 20 to the Conway Blue 41 with Warner and Hill combining on completions of 14 and 19 yards. But a fumbled exchange between Warner and running back Mar’Kevius Nelson was recovered by the Kittens.

Johnson, however, continued to be covered by Young like a coat. He lost 2 on the first play. After a procedure penalty, Ellis tried to hit a receiver near the right sideline. But Tipton got there, flashed in front of the receiver and made a one-handed snag. He never broke stride as he raced down the sideline, picking up blockers all the way to the end zone.

The Hornets ran the swinging gate on the extra point and Harris, usually the holder for Alex Denker’s kicks, tossed a pass to Shiew for a successful two-point conversion. 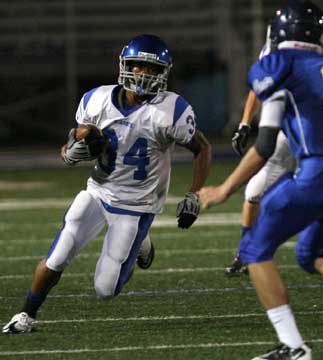 In turn, Conway picked up its last first down of the night after having made an adjustment to find room for Johnson to run. His 8-yard tote reached the Bryant 39. Two more runs reached the 31. On third down, however, Drew Allen and Kyle Lovelace knifed through to drop him for a 3-yard loss.

On fourth-and-5, the Kittens went for it and Ellis completed a pass to Johnson only to have Young and Lovelace track him down short of the first and the Hornets took over on downs with 4:12 still to play in the first half.

It didn’t take long for the offense to find paydirt. Warner’s throw to Hill picked up 40 yards and, after Conway jumped offsides, the two hooked up again on a 23-yard scoring strike.

This time, again out of the swinging gate formation, Harris ran in the conversion and it was 16-0 with 3:59 left in the half.

From their own 20, the Kittens went nowhere. Johnson was stuffed for no gain by Hunter Fugitt then Ellis misfired on a deep throw. On third down, Shiew made his interception and took nearly the same route as Tipton had down the left sideline for another TD. Denker kicked the extra point and it was 23-0. 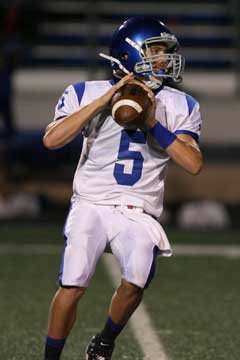 The Hornets forced a punt with 1:32 left in the half and made a bid to score again but, on a fourth-down run with :14 to go, Hill came up a yard short of the first at the Conway 40.

The Kittens ran one last play in the half, trying to go deep but Hardin intercepted at the Bryant 34 and returned it to midfield as the half came to a close.

Conway’s only kickoff of the evening opened the second half. Hunter fielded the ball at his own 7 and was hardly touched on his sprint to the other end.

Conway lost yardage on two of its three plays on the next series. Young stopped Johnson for a one-yard setback and, on third down, Trusty sacked Ellis.

On the subsequent punt, Hill nearly scored, turning in a 37-yard return to the Conway 35. Hunter broke a 21-yard run and Warner completed a 10-yard pass to Hill that reached the 1, setting up Warner’s sneak for the 6. Denker kicked it to 36-0.

With the sportsmanship rule in effect (a continuously running clock), three Ellis passes fell incomplete and the Kittens punted again. Hunter broke the return for an apparent 59-yard touchdown but an illegal block negated most of the run.

Schrader then quarterbacked the Hornets’ second team on the drive to the 8 that ate up just about all of the rest of the clock. The drive featured the running of Nelson who picked up 26 yards on three carries to make him the team’s leading rusher for the night. Hunter Lawhon’s 10-yard run got the ball to the 8. Travon Lee picked up two yards to the 6 and, after a delay penalty, another 4 back to the 7 before Schrader started taking a knee.