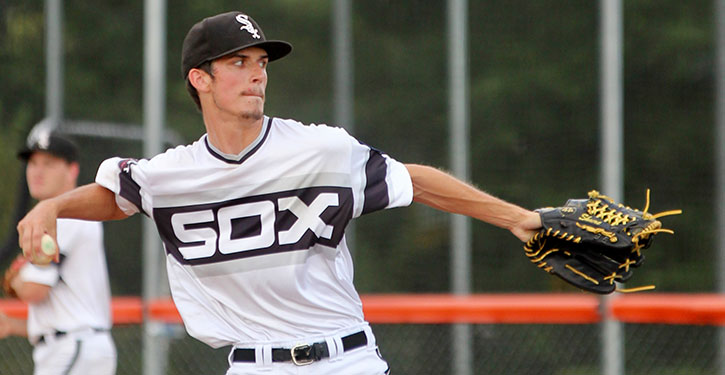 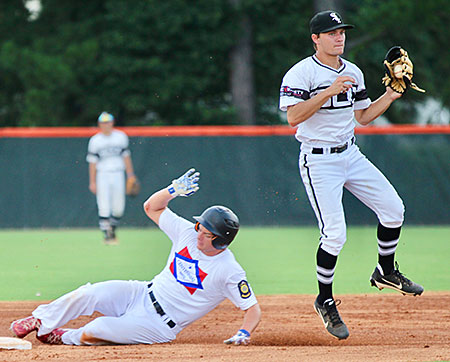 CONWAY — First there was a flash of lightning and the players for the Bryant Black Sox and Cabot Centennial Bank were pulled from the field. Then it started raining a little. The wind picked up and the crackle of thunder signaled the close proximity of the lightning. Fans were warned that it might be wise to get away from the metal-based bleachers.

The rain increased in intensity, into a steady shower. Hendrix College head coach Neil Groat and his aides pulled out the tarps for the home plate area and the pitcher’s mound. Everyone checked their phones for the radar, which looked, at first fairly tame but, moments later, the red in the core of the green splotch on the map around Conway began to grow.

The corps began to roll out the full infield tarp. A call was made to the Conway Legion team to come help and the Bryant players returned from shelter to help roll out the tarp and get it placed as the rain steadily increased. The wind whipped up the tarp as the players and crew grappled with it. 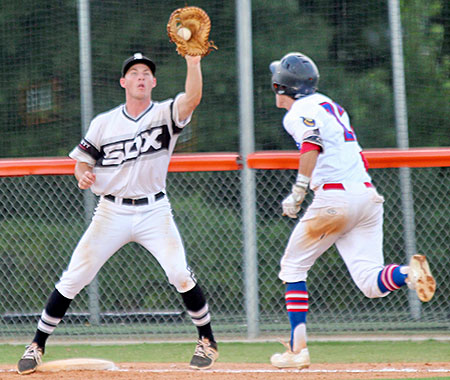 Shortly after it got into place, the rain shower turned into a full-blown storm with hit winds that blew the American flag off the flag pole and whipped the rain sideways across Warrior Field.

Thirty or 45 minutes later, it was certain that there would be no more baseball on Sunday at the park.

Bryant was leading Cabot 3-1 after just breaking through for all its runs in the top of the third. Cabot was preparing to come to the plate in the bottom of the inning when the lightning showed up.

At UCA, Fort Smith had just taken a 2-0 lead in the top of the second.

Speculation was that, if the rain would cease and the lightning desist, both games could be concluded there. But the weather kept pushing back plans to resume. Finally, Cabot and Bryant were advised to head home and wait for Monday. Their game will be resumed at 11 a.m., with two elimination bracket contests to follow with Paragould taking on Russellville around 2 p.m., followed by Little Rock taking on Conway around 5.

Because neither Texarkana nor Fort Smith had hotel rooms for the night — win or lose, neither would play again until Thursday or Friday — plans were to wait late into the night to get their game in.

They finally got back to it around 7:30 and, despite another lightning delay, got the game in with defending national champion Texarkana rallying for a 7-2 win and a spot in Friday’s winners’ bracket final against the winner of the Bryant-Cabot game.

Cabot, which had saved ace Brett Brockinton (Crowder Junior College) for Sunday, had taken a 1-0 lead in the first off Bryant ace Alex Shurtleff (Harding University). Blake McCutchen doubled to lead off the home first and, after Shurtleff struck out the next two, Dillon Thomas walked on a tough 3-2 pitch then Logan Edmondson just beat out an infield hit to drive in the run.

Shurtleff struck out Rail Gilliam to force Cabot to leave runners at second and third.

The Sox, meanwhile, were set down in order over the first two innings with Brockinton fanning three.

Cabot managed a one-out single in the bottom of the second as Shurtleff fanned another and Bryant broke out in the third. Aaron Orender ignited the three-run uprising with a solid double to left. Scott Schmidt slapped a single to right then Coby Greiner got a squeeze bunt down to get Orender home with the tying run.

Logan Allen ripped a double over the left-fielder’s head to plate Schmidt and, with two away, Seth Tucker plugged the gap in right center for an RBI double.

Dylan Hurt singled Tucker to third then stole second before Brockinton escaped with a strikeout. His pitch total having doubled from 24 to 48.

With the new pitch-limit rules, both starters will probably not be able to return on Monday as they both eclipsed the 30-pitch limit that would allow a pitcher to throw on consecutive days. They both would have to rest a day before being eligible to pitch again.