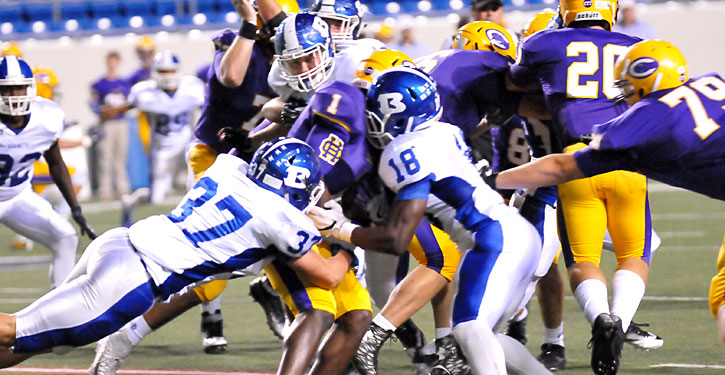 The Journey: Hornets go from 2-2 to 6-2 and playing for share of first

After having to rally in the second half for their first two wins, both against Class 6A teams, and getting overwhelmed a bit in their first two losses (against 7A teams), the Bryant Hornets have now won four in a row, scored over 40 points in each and played themselves into a first-place showdown in the 7A-Central Conference against the undefeated North Little Rock Charging Wildcats.

In retrospect, those results came against two ranked 6A teams, Benton and Lake Hamilton, and two ranked 7A teams, Fayetteville and Fort Smith Northside.

Still, observers and fans had their doubts about how the Hornets would do this season. Some even wondered if the team might be headed for the program’s first losing season since 1998.

A factor in that concern too was an alarmingly rugged outing against the Pulaski Academy Bruins in the preseason benefit scrimmage.

“I don’t think people believe it,” acknowledged Buck James, who took over the program in the spring after longtime head coach Paul Calley accepted an offer to coach the Harmony Grove Cardinals. “I talked to a guy who had only seen us against Pulaski Academy that was at the (Hornets’ most recent win against Cabot), a friend of mine, and he was blown away. Jeremy Muck (of the Arkansas Democrat-Gazette) hadn’t seen us but a couple of times and it was early. He could not believe how far we’d come.”

“I thought all along that we had some ability to do some things, a lot better than probably anybody thought,” he continued. “But the only way we were going to do it was for everybody to be on the same page.

“I’m surprised that it fixed itself as quickly as it did but us having a chance to be successful doesn’t surprise me because we had some talent,” the coach stated. “We weren’t necessarily really big or really fast but we had guys that were good football players. Sometimes you don’t have to be the bigger, stronger guy to be a good football player. You just have to be disciplined and you have to be well versed on what you’re trying to do and then be able to execute it under adverse situations. I knew that, if we could ever get to that point, we had a chance.”

So how did that happen?

“It just shows hard work pays off,” James asserted. “It’s been a lot of hard work, a lot of hours, a lot of kids buying in. I think the kids had to buy in. I think, at first, it was — you know, change is never easy. Young people seem to take change better than older people do. Once they gave us a chance to be successful then they started buying in.

“Being in great shape, being strong, it’s not an easy thing,” he continued. “Going to that weight room every day. Really, we’re looking at about 48 weeks a year being in that weight room four and five days a week. It’s tough. Then being out there and conditioning and doing the things — reps and reps and reps that we get — practice is not an easy thing. You have to become accustomed to it.

“But, you know, after this year, nobody will know any different,” the coach mentioned. “It’d be a shock not to be in the weight room. It’d be a shock to not have 100 reps a day in practice.

“Reps have a lot to do with it, just knowing the guy, what he’s doing, without having to tell him,” he explained. “The communication between the quarterback and the receiver, offensive linemen and quarterback — it all takes time. You have to become comfortable with your surroundings and the concept of what you’re trying to do. That stuff all has to work on the same mechanism and it has to work at the same time. It’s just the concept of knowing what your buddy’s going to do before he does it. And that takes time. It’s like building friendships or relationships or anything else, it just takes time to develop those things.”

He pointed to the fact that he and his coaches decided to play more of the underclassmen in junior varsity games on Mondays.

“It helped to let them get accustomed to what we’re trying to do. But really just plain old-fashioned hard work and determination from the kids and the coaches is really given us a chance to be successful.

“Everything evolves,” James related. “Football is like another language. It’s like if these guys came in here to learn Spanish or French. As you evolve — you even hear Coach (Bret) Bielema (Arkansas Razorbacks) talking about Hog-anese and all that stuff.

“Then it evolves throughout the season. As you go through a season, you have to make different changes and different schematic things with your system that builds off of what you do because, in this league, you can’t do the same thing every week. There’s too much film. We trade three films every week; there’s two angles. People are watching film. So you have to have some tweaks in what you’re doing each and every week. It just doesn’t happen. It has to evolve.”

The question now is, how far can the 2016 Bryant Hornets evolve?

Even with their success going into last Friday’s Cabot game, folks weren’t sure. But the Hornets won it going away, 48-20.

“I thought we played well,” James observed. “I thought we played hard. We played fast. I thought we carried our pads fast. It was great to see us get the ball in the secondary and hit some timing routes and really get the passing game going. I think, if we can ever get that like we want it that helps us.

“I don’t believe we’d have ever been able to beat those guys running the football at them,” he said. “We proved that in our JV game (Monday). You put seven guys up there (like they did) and you’ve got five blocking and one running, it’s not a win-win situation. I think that’s where people have come up against them. You’re not going to run the ball against their defensive front. But, if you get the ball into the secondary, you have a chance.”

He lauded offensive coaches Robert Hooks (receivers, offensive coordinator), Kirk Bock (quarterbacks) and Shane Clancy (line), saying, “I thought our guys did a super job. That game plan was really, really good. I told our kids on Wednesday and Thursday that we had a chance to break out. We had a chance to really score a lot of points and that this was a game that we could do it in.

“And I knew Coach (Darrell) Burnett and their guys, Coach (Travis) Queck and Coach (Brad) Stroud would come up with something that would give us a chance to hold them — we felt like we could hold them under 20 points. If we could go and do that then we’d have a chance.”

The X factor was Cabot’s star quarterback Jarrod Barnes who was coming off an injury.

“I thought we won in all phases, offense, defense and kicking game,” he stated. “To do that against a team of that caliber, speaks a lot for our kids and our coaches.”