The third through sixth grade city basketball tournament rolls on 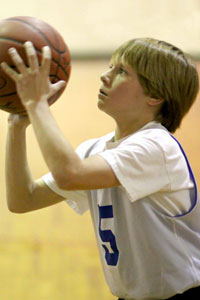 At the end of the day, Saturday, Feb. 21, two teams from the 5th/6th grade boys division advanced to the next round. They were Team Ruple defeating Team Cason 42-32 and Team Hurt defeating Team Chumley 50-47. Teams Cason and Chumley were eliminated from tournament play.

On tap for Thursday night, Feb. 26, two games in the 3rd/4th grade boys division with Team Sandidge and Team Sanders matching up at 6 p.m., followed by Team Pringle and Team Dupree at 7. The final game of the night at 8, matches the regular-season champion Team Price facing off with league runner-up Team Warner. If both teams remain healthy, look for a shootout!

Saturday will see the culmination of the tournament, with semifinal games and the finals. Games begin at 9 a.m., with the finals starting at 2:30 through 6 p.m.

Thanks to Richard Chumley for the tournament update.