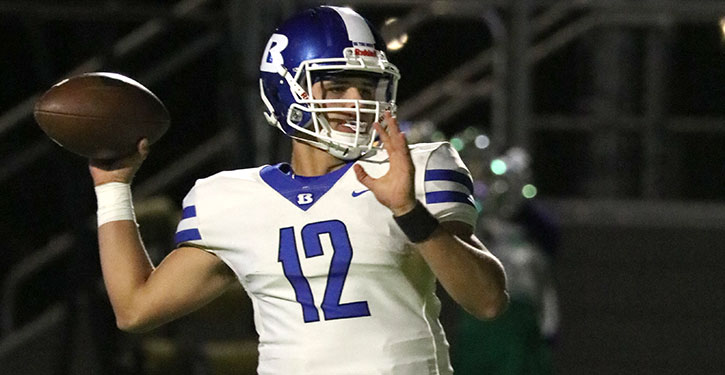 LITTLE ROCK — The top-ranked Bryant Hornets’ did not have to go far for their 23rd consecutive victory on Friday night.

Just a few miles up the Interstate 30 to get to the brand-spanking new Little Rock Southwest High School, then with four possessions starting in the opponents’ end of the field. Add to that three special teams touchdowns and you have a full-on rout of the fledgling Southwest Gryphons.

The Hornets set a school record for points in a game in their 70-0 victory in which starters only played until halftime and the mercy rule (running clock) was in effect the entire second half.

Bryant’s previous record was 59 points, scored against Little Rock Catholic in 2018 and against Perryville in 1965.

Southwest, which hadn’t played in two weeks with a bout of Covid-19, came in 0-3 with losses in each of its first three games. Bryant improved to 3-0 in 7A-Central Conference play. It was the first league game for Southwest.

The Gryphons managed just 62 yards of offense in the first half on 34 snaps. Bryant had 273 yards on 23 plays by halftime.

After missing out on playing the previous week as Little Rock Central battled Covid, the Hornets improved to 6-0 going into the meat of their season, starting with a Homecoming match-up against a Cabot team which is 5-1 next Friday.

Senior quarterback Austin Ledbetter passed for three touchdowns while completing 11 of 15 passes for 208 yards in the first half. Hayden Schrader caught two of those TD tosses. Blake Everett caught the third.

Xavier Foote, starting in place of Tanner Anderson who was held out because of injury but should be back next week, had touchdown runs of 16 and 8 yards. Jamarien Bracey ran one in.

But the special teams made some hay too. With the Hornets leading 28-0, Hart Penfield blocked a punt. In the scramble for the loose ball, it wound up in the end zone where Koby Melton fell on it for the TD.

With Bryant up 49-0 in the final seconds of the half, Brock Funk kicked off to Southwest’s Mister-do-it-all Josh Brown, but the ball ricocheted off his hands and rolled toward the end zone. Another scramble for the ball ensued and Robert Hendrix eventually pounced on it for the touchdown.

Then, to start the third quarter, Jordan Knox, after initially bobbling the ball, returned the kickoff 85 yards for a touchdown.

A Gryphon turnover started the scoring onslaught. On the first play from scrimmage, Southwest quarterback Hunter Belton fumbled the snap and Brayden Godwin recovered for the Hornets 26 yards away from paydirt.

It took two plays. A swing pass from Ledbetter to Foote picked up 9 yards then Foote took a handoff and scored from 16 yards out.

The best Southwest drive of the first half followed. Alternating Belton, more of a passer, and the speedy Brown, the Gryphons picked up a pair of first downs. Brown picked up the initial first down with an 11-yard run, which proved to be his team’s longest play from scrimmage. Later, Brown converted a third down with a short pass to H back Michael Graydon.

Southwest reached its 49 — as close as it got to Bryant territory in the first half — but stalled and had to punt.

The drive was knocked off schedule when Bryant sophomore Jaylon Russ stopped Brown for no gain on first down. Good coverage by the Hornets’ LaQuav Brumfield and pressure on Belton by the Rodricho Martin forced an incomplete pass on third down.

The Hornets were punted back to their own 30, which was their worst starting field position of the night. They covered the 70 yards to the end zone in four plays, all passes, three completed. Knox hauled in the first one for 23 yards. Foote caught the second one for 6 then Schrader caught a 12-yard pass over the middle and turned it into a 41-yard touchdown play.

Penfield may have partially blocked the next Southwest punt because it only traveled 7 yards, giving the Hornets possession at the Gryphons’ 40. On a drive featuring Bracey, two runs got the Hornets to the 12. From there, Ledbetter found Schrader over the middle for the TD.

With 51 seconds left in the first quarter, Brock Funk kicked the extra point to make it 21-0.

Andy Scott made back-to-back stops for the Hornets on the next series and, again, the Gryphons lined up to punt from their own 29 on a fourth-and-11. But they ran a fake, with a direct snap to Graydon, an upback. He was stopped short of the first down by Jaylon Brown and the Hornets took over at the Southwest 37.

Again, Ledbetter completed 3 of 4 pass, hitting River Gregory for 11 then Hendrix for 14. Blake Everett caught the TD toss from 12 yards out.

The Gryphons went three-and-out and punted from their own 21. That’s when Penfield blocked the kick flush and Melton recovered to make it 35-0.

The Hornets’ next possession started at their own 48. Foote dashed for 14 yards then Ledbetter threw to Knox for 30 yards to the 8. Foote carried it in from there.

Ledbetter’s 38-yard pass to Cory Nichols set up the next TD. Bracey scored from the 6 with :24 showing on the clock and it was 49-0.

The fumble on the ensuing kickoff inflated the margin further.

After Knox’ kickoff return to start the second half, reserves got a chance to play a lot. Traylon Russ and Pierce Kinley stopped Southwest’s kickoff return short of the 20. Then Malachi Carey put a hurt on the Gryphons’ subsequent series, sacking Brown back to the 10.

Knox returned the ensuing punt 24 yards to the Gryphons’ 23, but a blocking penalty negated much of the return.

Though Chris Gannaway had a 13-yard run and caught a pass from Carson Burnett for 7 yards, the Hornets stalled at the 37.

Southwest made their first foray into Bryant territory, reaching the 46 but, on a fourth-and-5, running back Demetrice Thomas was stopped short by Grant Reidmueller and the Hornets took over at their own 43.

A 13-yard run by Burnett was followed by a 18-yard dash by Gannaway. Despite two holding penalties after Bryant got inside the 10, they scored on a 6-yard keeper by Burnett with 4:54 left.

An extra point by Stephen Fuller completed the scoring.