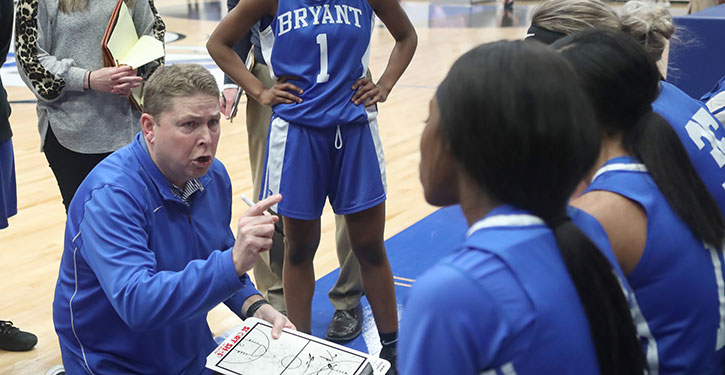 Senior point guard Tierra Trotter scored a career high 31 points to go with seven steals and three assists to lead Bryant Lady Hornets to a 71-55 win over the Rogers Lady Mounties in the first round of the Class 6A State Tournament at Hornet Arena Wednesday night.

Those seven thefts were part of 25 turnovers Bryant forced Rogers into. In all, the Lady Hornets had 18 steals as they attacked the passing lanes. Parris Atkins had 19 points and three steals while her older sister India Atkins finished with 17 points and five thefts.

Bryant, now 17-10, advances to play 6A-Central Conference champion and defending State title team, the Fort Smith Northside Lady Bears, in the second round this Friday at 4 p.m. The Lady Bears defeated the Lady Hornets twice during the regular season, but the game was tight until right at the end when the two teams played at Hornet Arena.

“This is two years in a row, we’ve won a game in the State tournament,” noted Lady Hornets head coach Brad Matthews. “To have the State tournament the first time ever in Bryant, to win a game here — we play really well here and, hopefully, Friday at 4 o’clock we can continue to play well.

“It’s a great team win,” he said of Wednesday’s game. “Obviously, a lot of people played well. When you score 70, I think it speaks to the team and what we do.”

It did not start well for Bryant. Rogers hit its first six shots including a trio of 3’s to grab a 17-7 lead. Kate McConnell, who finished with 20 points including six 3’s had two in that early salvo.

But, after a timeout, the Lady Hornets began to be more active defensively.

“I did not think we could full-court press them because there’s just a little too much space,” Matthews said. “I thought, when we got them in the half-court, our quickness would be the advantage. We were not very quick early. We were kind of reactionary instead of being active on the ball, active off the ball.

“I think the thing about our league is you’re going to hit adversity every Tuesday and Friday,” he mentioned. “So, it just builds in the fact that it’s a long game. There are really good players on the other team. They make shots. The don’t lay down. I think our conference season prepared us to win tonight.”

Trotter connected on her second 3 of the game right out of the timeout. She then swiped a pass and hit a layup. Rogers finally missed a shot with about two minutes left in the quarter. But a jumper in the lane by Brooke Park got them back on track.

Off a steal by Celena Martin, Trotter drove to the basket and cut the lead to 19-14 going into the second quarter.

Free throws by Aubrey Treadwell and McConnell early in the second quarter had Rogers on top 22-14. But the Lady Mounties didn’t score again until just 2:57 remained in the quarter as Bryant surged to take a 23-22 lead.

“McConnell’s a great player and (Camiran) Brockhoff is a great player and they have one of the best coaches in the state in Preston Early,” said Matthews. “I knew when we drew them last week, he would put more stress on our defense in terms of what they run than anybody we’ve played all year. They did that.

“But our kids were able to do a much better job after we got settled a little bit,” he added. “We were able to force a lot of turnovers, get out in transition. It loosened us up.

“Obviously, Tierra played phenomenal on the offensive end,” the coach said. “I thought McKenzie (Muse), Ivory (Russ) and Celena really fought down there to make it easier for those guards to be active. Something a lot of people don’t notice is McKenzie’s fighting her rear end off every game. I thought Celena and Ivory gave great energy tonight.”

Muse hit a 3 along the way but led the team with five rebounds. She also had a steal and four blocked shots.

Trotter started Bryant’s second quarter burst with another 3. She was 5 of 9 from distance in the game. She followed with a steal and layup then combined with Madi Scifres to force a turnover that was cashed in by Parris Atkins. Another Trotter theft led to a layup and the lead.

Martin swiped a pass but, after making her first eight shots, Trotter finally missed one. Rogers managed to come back to take a 32-31 lead at the break.

Brockhoff scored the first basket of the third quarter but then Bryant went on another spree. Parris Atkins had back-to-back drives that put the Lady Hornets back on top. India Atkins made a steal and wound up at the free-throw line where she converted twice. She followed up with a 15-footer and, after Parris Atkins made a steal, Trotter hit a layup, forcing a Rogers timeout with 5:17 left in the quarter and the Lady Mounties suddenly down 41-34.

Bryant’s lead was 50-42. Off a blocked shot by Muse, India Atkins hit a pull-up jumper. Moments later, Trotter did the same. Trotter and India Atkins combined to force a turnover and, on the two-on-one break, Trotter hit the layup and Bryant was ahead by 14.

It was 57-47 going into the fourth. And when Trotter and India Atkins each cashed in on steals to start the period, Rogers had to take another timeout.

McConnell responded with a 3 and Park scored inside to cut the lead down to single digits. But the Lady Hornets followed with a game-clinching 10-0 run with the Atkins sisters doing all the scoring. 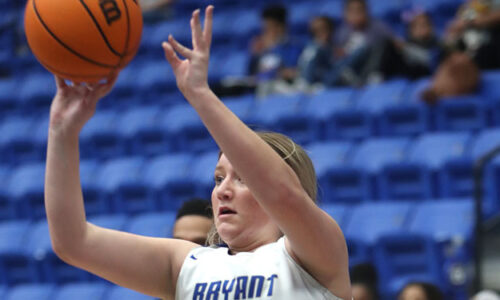