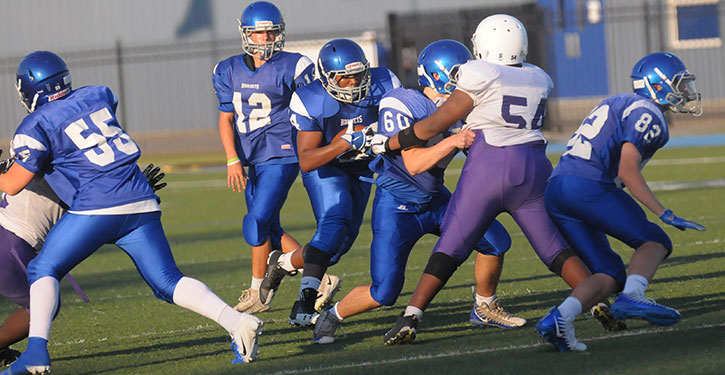 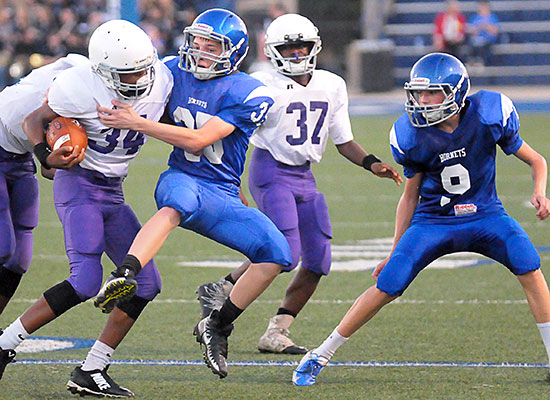 The Barton Junior High Wild Kittens eighth grade team of El Dorado ran just five offensive plays in the first half, possessing the ball for just under a minute of game time. Yet, they scored on two of those snaps and made it hold up for a 13-0 victory over the Bryant Blue Hornets eighth grade team of Bethel Middle School on Thursday evening at Bryant Stadium.

The Hornets possessed the ball for 39 plays in the contest to just 17 for Barton but just couldn’t find the end zone.

Wide receiver Deandra Burns caught a short pass that he turned into a 53-yard touchdown then ran 66 yards for a TD. Those were the first two Wild Kittens’ plays. On the last play of the first half, he caught a pass that turned into a 27-yard gain before he was driven out of bounds. That’s 146 of Barton’s 208 yards of offense.

Penalties sabotaged the Hornets’ offense. On the opening possession of the game, they drove from their own 40 into El Dorado territory before suffering a holding penalty. In trying to overcome that, they were hit with a false-start flag. A third-and-15 pass from Tyler Pinney to Evan Lamb got back to Wild Kitten territory but, on a fourth-and-4 at the 43, a fumble on a lost-yardage play, turned the ball over to Barton. 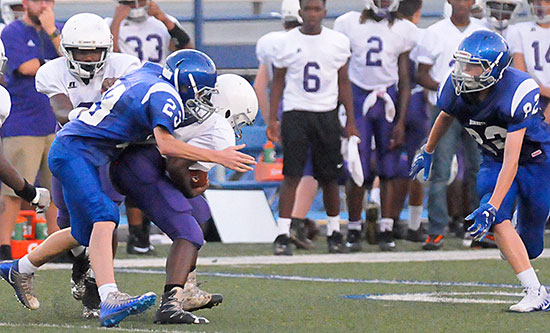 After the Kittens scored, the Hornets overcame a pair of penalties to drive into El Dorado territory again. Xalen Curenton had a 13-yard run, Tyler Mosley powered for 8 yards then Curenton picked up 10 to get to the Kittens’ 41.

On back-to-back plays, Pinney found Aden Palmer with a 6-yard completion to reach the 29.

On the next play, however, Curenton was dropped for a 5-yard loss. Mosley got those 5 back but a third-down pass was dropped, and, after another penalty, a fourth-and-15 pass fell incomplete with 1:24 left in the half.

Barton took over and scored its second TD.

In the second half, the El Dorado team got the ball first and, thanks in part to a tackle for loss by Bethel’s Kade Stewart, the Wild Kittens were forced to punt.

In turn, the Hornets picked up a first down when Mosley converted a fourth-and-2. Pinney threw to Jonathan White for 7 yards to the Bethel 42 but the drive stalled there.

They turned it over on downs with 6:38 left in the game. A personal foul penalty led to a three-and-out for the Kittens and the Hornets regained possession after a punt at their own 31.

Runs by Currenton and Aiden Baker forged a first down, but they could go no further.

After a punt, El Dorado ate up the final 4:00, converting a third-down with the 27-yard pass from Kolin Parker to Burns.

The loss brought the Bethel record to 2-2 on the season going into the annual Hornet Bowl on Thursday, Oct. 11. 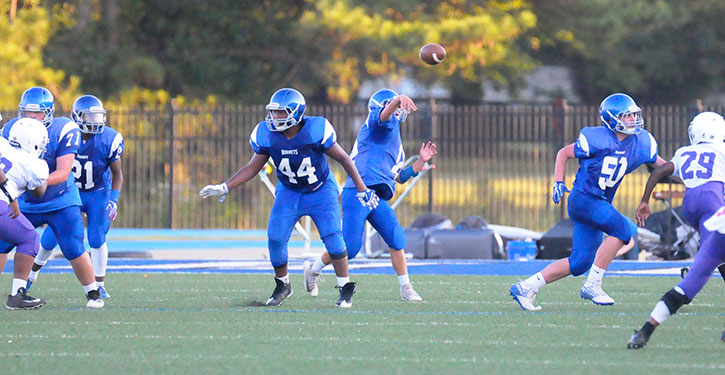 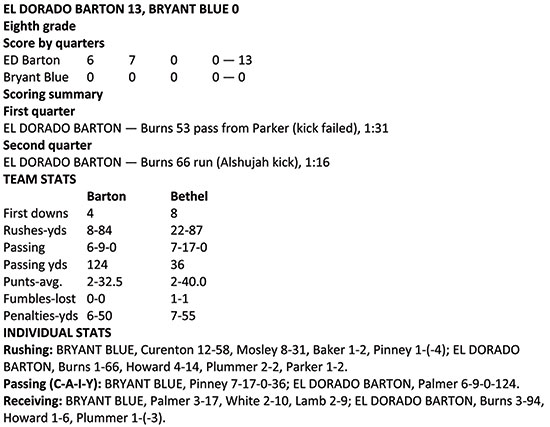