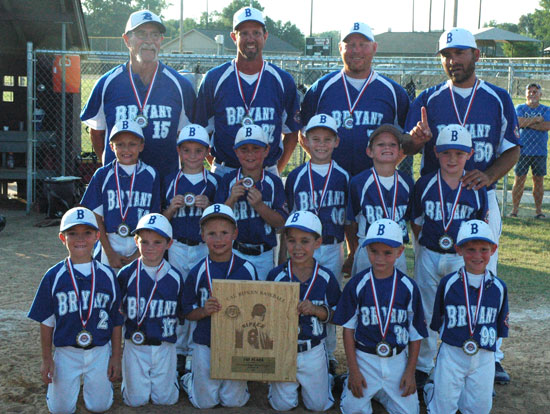 BENTON — After rolling undefeated through State T-Ball Tournament play, the Bryant 6-year-old All-Stars[more] have now waded through the field in the Southwest Regional unbeaten, capturing the tournament championship. 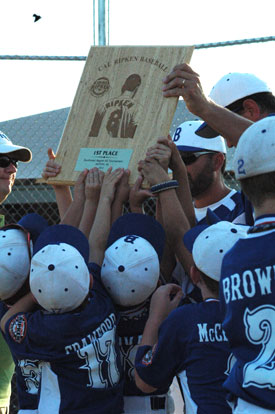 Bryant ousted Sylvan Hills 13-0 in one semifinal while Orange Grove, Miss., knocked out Benton, 14-1, in the other. In the final, Bryant came from behind to win 13-8 to capture the crown.

Orange Grove broke out to a 5-0 lead in the first inning and led 8-2 going into the bottom of the third when Bryant erupted for five runs then, after holding the Mississippi team in the top of the fourth, scored the maximum six runs in the bottom of the inning. With one last chance, Orange Grove only managed one baserunner in the top of the fifth and Bryant celebrated its championship.

Bryant’s initial response to the five-run first for Orange Grove included a triple by Horn and a two-out RBI single by Hunt. 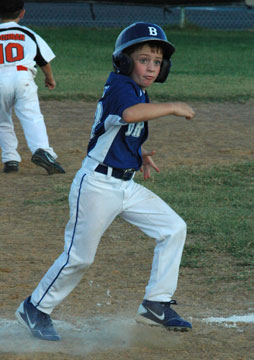 Orange Grove got that run back in the top of the second but Bryant scored again in the home half when Catton and McClellan singled. Brower bounced into a force at second then so did Crawford as Catton came around to score.

The lead grew to 8-2 when Orange Grove added a pair of runs in the top of the third but Bryant’s comeback commenced in the bottom of the inning when, with one out, Horn smacked one deep to center for his second triple. Nagle singled him home then Kemp and Hunt had base hits. Johnson drove a double to left-center and, with two down, Catton and McClellan capped the inning off with base hits.

Orange Grove got a runner aboard with two outs in the fourth but when the next batter hit the ball to left, Bryant was able to throw the lead runner out trying to get to third as the momentum continued to build.

And when Horn followed singles by Crawford and Hughes with a blast to right for a home run, Bryant had its first lead of the game. And the Stars weren’t done. Nagle, Kemp and Hunt cracked consecutive singles and Johnson’s second double made it a max inning. 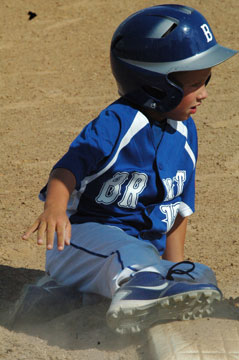 Sylvan Hills could only muster two base-runners in the three-inning romp and Bryant pushed five runs across the plate in each of the first two innings to make quick work of it.

The opening salvo was ignited by Horn’s lead-off single. Nagle belted a double and when Kemp followed suit, Bryant was on the board even though Nagle was tagged out at the plate.

Hunt singled then Johnson blasted a homer to right-center to make it 4-0. Stovall singled and, with two down, McClellan doubled to set up Brower who beat out an infield hit for an RBI.

Palmer opened the second with a single then the Stars began to muscle up. Hughes and Horn smacked doubles then Nagle legged out a triple. Kemp singled in a run and scored the fifth one on a double by Stovall.

Bryant put the game out of reach in the third. McClellan beat out an infield hit but was forced at second on a grounder to short by Brower. Crawford singled then Palmer drove in a run with a double and Hughes knocked in two with his two-bagger to set the final score. 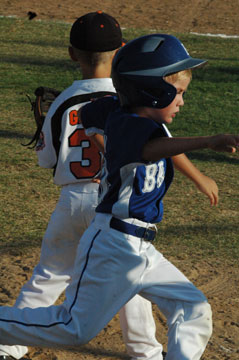 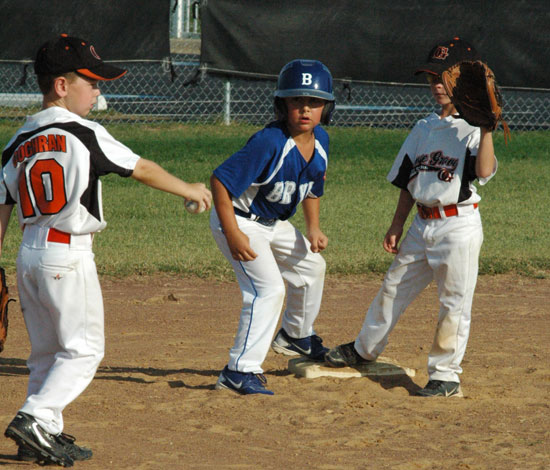