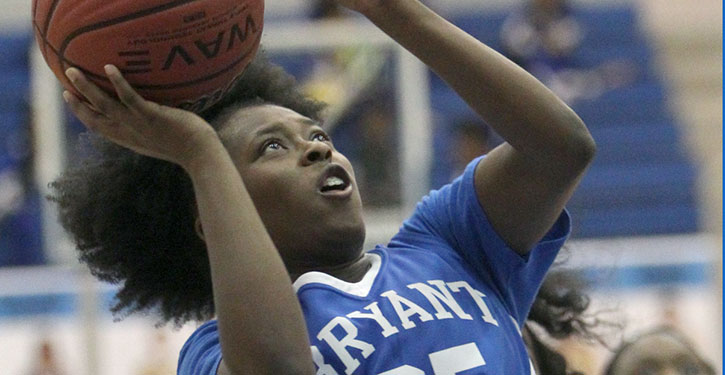 Senior Kalia Walker, who came on late to lead the Bryant Lady Hornets in scoring for the season, has been named all-State in Class 6A as well as All-State Tournament.

Along with Walker, senior Robyn Gordon and juniors Tierra Trotter, India Atkins and McKenzie Muse were named all-conference in the 6A-Central Conference.

The Lady Hornets went 16-11 on the season including a 54-35 win over Van Buren at the Class 6A State Tournament.

Walker poured in 34 points in that victory, a career high. For the season, she led the team with a scoring average of 14.3 points per game, hitting 35.4 percent of her shots from 3-point range. She averaged 2.5 rebounds per game and shot 68 percent from the free-throw line.

“Kalia provided us a spark offensively throughout the year,” said Lady Hornets head coach Brad Matthews. “Her performance down the stretch of the season and into the State tournament was great to see.”

Gordon averaged 5.6 points and 4.5 rebounds per game. She shot 48.2 percent from the field.

“Robyn improved throughout her three seasons in high school,” said Matthews. “Looking back at where she was her sophomore year to where she is now, her growth is tremendous. As a senior, we will be her greatly.”

Trotter averaged 9.8 points, 4.1 assists and 3.2 rebounds per game for the Lady Hornets.

“She became much more efficient in her game,” said Matthews. “Her turnover-to-assist ration improved a lot from her sophomore year. Her shooting percent also improved from a year ago.”

Muse, who missed almost all of her sophomore year, wound up averaging 9.1 points, 5.7 rebounds and 2.1 assists per game. She hit 75.4 percent of her free throws.

“McKenzie had a good year coming off her ACL injury from a year ago,” Matthews said. “She worked so hard to get back from such a tough injury. She got better and better as the season went along.”

“India showed tremendous improvement from her sophomore year,” said the coach. “Her numbers went up in just about every area. She worked really hard to improve her offense and it showed throughout the season.”

March 12 in Bryant athletic history: 2004
Rough day for Lady Hornets with a pair of setbacks