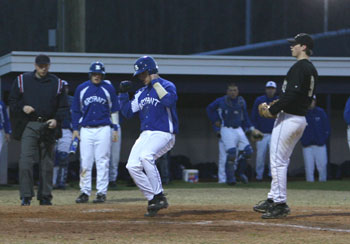 In a duel between Bryant’s Ben Wells and Little Rock Central’s Luke Montgomery, it figured that one key hit or one little miscue would end up being decisive.

In the bottom of the sixth inning of a scoreless game, Bryant had runners on the corners with two out and Brady Butler at the plate. A pitch in the dirt scooted under Central catcher Christian Cooley’s mitt and to the backstop allowed Hunter Mayall to score what turned out to the be the only run in the 7A-Central Conference opener for both teams.

Tyler Sawyer relieved Wells in the top of the seventh and retired the side in order to pick up the save as the Hornets improved to 2-2 overall going into their second league tilt against Little Rock Catholic at Lamar Porter Field on Thursday, March 5.

Both Wells and Montgomery repeatedly pitched out of jams though the teams managed just two hits apiece.

“Wells did a great job,” asserted Bryant head coach Kirk Bock. “And, defensively, we did a very good job. Kaleb Jobe did an excellent job behind the plate, he knocked some balls down and threw a runner out at third.

“I thought (Central) did an excellent job,” he added. “They came out, they played hard. The pitcher did a great job of keeping us off balance. They made one mistake on that passed ball and it was the game.”[more] 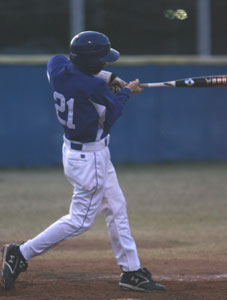 Mayall had reached on an error to start the inning, though it was a tough chance for Central’s Macon Speed to make to his right. The bouncer came up on him and he couldn’t handle it cleanly. Mayall moved to second when the next batter, Garrett Bock, got the bat on the ball on a 3-2 pitch. With the runner on the move, Bock’s bouncer to second proved just as good as a sacrifice after he was unable to get a bunt down early in the count.

Sawyer followed with a bouncer to first that allowed Mayall to take third. The Tigers issued Jobe an intentional walk, bringing up Butler.

“Offensively, we’ve got to come around,” stated Bock. “We can hit. We’re just choosing not to right now. We’re going to hit. We just need to make some adjustments and get it done. Once that side comes around, we’re going to be tough. We have velocity change drills we work on every day. Right now, they’re just not catching on to it. Once they catch on to it, they’re going to take off and they’re going to do well. We’ve just got to work on it. We’ve got to go back to work tomorrow and get better. But right now, we have to play perfect defense and get some breaks. We got a break there in the sixth.”

The Hornets’ only hits were a solid single to left by Butler in the second and an infield hit by Caleb Garrett in the third. Butler was forced out on a grounder to second off Jordan Taylor’s bat. Taylor beat the relay to first then stole second but was stranded when Montgomery got Brennan Bullock to pop out to second. 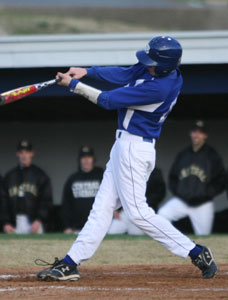 Garrett, too, was forced out at second on a grounder by Mayall. And when the relay was wild, Mayall advanced to second with two down. Garrett Bock walked but Montgomery fanned Sawyer to escape.

Wells worked around a pair of walks in the first with the help of a doubleplay, started by Sawyer at short. The junior right-hander retired the next six in a row but, in the fourth, hit Russell Goss. Cooley reached on an error and the Tigers had two on and no one out. But Wells struck out the side to leave them no closer to scoring.

But Central threatened again in the fifth when Adam Meeks and Mark Murphy each lined singles to right to put runners at the corners and nobody out. But Wells fanned Clayton Booth then induced a pop to Taylor at second off the bat of Ivan Tate. Goss, who was on base all three times he came to the plate in the game, was up and took a strike. Jobe faked a throw to first when pinch-runner John Makris was leading off and quickly whipped a throw to third behind Meeks who was tagged out by third baseman Hunter Alford to end the threat.

In the sixth, Goss walked to lead things off then Cooley blasted a long fly to center, a drive that would’ve been out of some parks, but Garrett Bock run it down, making a nice running catch.

Goss made it to second on Jim Manney’s tap to the mound but Will Parham flew out to Garrett in right to end the inning as Wells wriggled off the hook again.

Sawyer only needed 13 pitches to get through the top of the seventh.