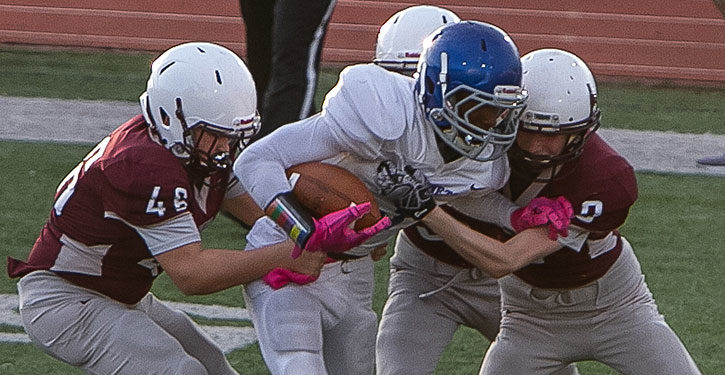 “Our defense stepped up when we needed it to with two goal-line stops and two forced fumbles,” he added.

“I am very proud of how our guys played with their heart and took care of business down the wire,” the coach concluded. “Our coaching staff had a great defensive game-plan and had our players prepared.”

The Hornets received the opening kickoff and took seven plays to score on a 71-yard drive.  Gary Rideout passed 36 yards to Singleton for the touchdown. A two-point conversion pass failed to leave the Hornets with a 6-0 lead.

Bryant went three-and-out and punted the ball back to the Panthers.  With 4:31 left in the first half, Benton went on a long, time-consuming drive. Benton quarterback Peyton McNeely ran for 32 yards on the possession, but on his fourth consecutive carry of the drive, left the game due to injury.  The Panthers reached the Hornet 1-yard line, but on the final play of the first half, fumbled and Bryant’s Gavin Lewis recovered to leave the score 6-0 at halftime.

The Hornets struck quickly to start the second half.  After stopping Benton’s opening drive of the third quarter, it took Bryant White just one play to score when Singleton raced 46 yards untouched.  Singleton ran in the two-point play to push the Hornet lead to 14-0.

Benton answered the Hornet score on its next possession. Jake Herbner, subbing at quarterback for the injured McNeely, completed a swing pass to Chris Bernard who sprinted 34 yards for the touchdown. Khristian Turner ran in the two-point conversion to narrow the score to 14-8.

The Benton defense held Bryant White to three-and-out on the next series. Justen Myles hit a 40-yard punt to pin the Panthers back at their own 13-yard line. However, on the Panthers’ first snap, Barnard busted through the line and outran the Hornet secondary for an 87-yard touchdown. Lewis tackled Benton’s two-point try to leave the score tied at 14-all at the end of the third quarter.

Bryant White responded with a 10-play, 55-yard touchdown drive that took 4:03 off the fourth quarter clock. Singleton carried the ball on seven consecutive plays, scoring on his seventh carry from two yards. Benton stopped the two-point try leaving the Hornets with a 20-14 lead with 2:11 remaining.

On fourth-and-three at the Bryant White 27, Herbner completed a pass to Colby Howard for 5 yards. Following an incompletion, then a pass interference call against the Hornets, Benton was left with one final snap at the Hornet 11. Herbner attempted a pass to Howard in the right corner of the end zone, but Hornet defensive back Bryson Adamoh batted it away to preserve the Hornet victory.