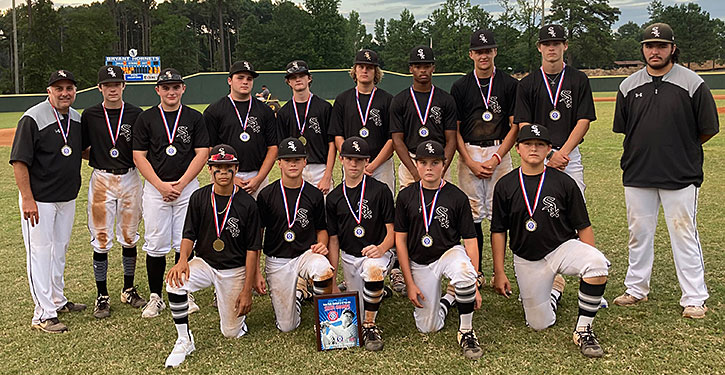 When the pitchers — they’ve got a bunch — for the Bryant Black Sox 15U baseball team started throwing strikes, the season completely turned around this summer.

After going 5-9 through the first half of the campaign, playing American Legion 15U teams and in showcases, they suddenly started winning. And, in the end, they won 13 of their last 14 games including their last 12 in a row, a run they capped off with a championship in the 2020 Babe Ruth 15U State Tournament, which was held at Bryant High School Field this weekend.

On Sunday, the Sox downed the Fort Smith All-Stars, 5-0, in one semifinal. It was their closest game of the tournament including an 18-1 romp over the same Fort Smith team on Saturday.

That set up a championship battle with a Sylvan Hills team that was coming off an exciting 8-6 win over Ouachita County (Camden) earlier on Sunday.

Bryant returned to dominance and came away with the title via the 15-3 romp in five innings.

“A lot of them came from a number of different directions and hadn’t played together, two or three here and there,” said Sox manager Michael Catton regarding the team’s slow start. “The first month was ugly. Part of it was chemistry. We got a few tournaments under our belt where we kind of — you know, we stayed at a hotel and built a little team chemistry. That team chemistry got us over the hump to some degree.

“We started throwing strikes and having some clutch hits,” he continued. “But more than anything, we didn’t throw strikes early and it was ugly and frustrating. I guess COVID was a little bit at fault maybe.

“But when we started throwing strikes we started winning. There wasn’t any magic sauce. We just talked about it a lot and really focused in our bullpens on throwing strikes more than working on a curveball, working on a changeup. It was just trying to make sure we were commanding the strike zone. They can all throw. They’ve pitched their whole life. They can all do it. It just wasn’t happening until the last month.”

Catton concluded, “The last showcase (in Little Rock July, 9-10), we went 3-0. That took our confidence up a couple of notches. The one before that (The Hagan in Memphis, June 25-28) was okay then that last one was really good. We beat a couple of really good teams in that one.

“This one here,” Catton allowed, “the competition wasn’t up to that par, but we did what we were supposed to do.”

Woods, a lefty, shut out the Sherwood team over the first two innings as the Sox established a 6-0 lead. In the top of the first, he worked around a lead-off single to Max Percefull. In the second, he hit Kanye Williams with a pitch after two were out then retired Brett Faulkner on a comebacker.

In between, the Sox struck for five runs. Clay Crawford, who, along with Gage Horn, had two hits in the game, singled to right and stole second with one out. Hunter Holt chased him home with a double down the line in right.

Luis Hernandez, running for Holt, took third on a wild pitch before Aden Palmer was hit by a 3-0 delivery. Palmer swiped second then Carson Kemp came through with a sacrifice fly to make it 2-0.

Palmer took third on a wild pitch as Grant Dunbar was drawing a walk. Trying to fend off a double steal, Sylvan Hills threw the ball away. Palmer scored and Dunbar took second. Horn went the other way for an RBI double. He made it 5-0 when Reid Catton stroked a liner to right center for a single.

Sylvan Hills changed pitchers and got the final out of the inning.

But, in the bottom of the second, Woods helped his own cause with a single to center. Crawford’s second knock put runners at first and second. Holt was plunked on the first pitch to him, loading the bases. Palmer delivered a sacrifice fly and it was 6-0.

In the top of the third, Sylvan Hills got on the board. Cooper West belted a two-out two-run triple after an error had extended the inning.

The Sox blew the game up with a nine-run third that included just two hits. The eruption commenced after Catton reached first on a third-strike wild pitch. Luke Bickerstaff walked and, with two down, so did Jordan Knox.

Crawford picked up an RBI with a walk then Holt was hit again forcing in Bickerstaff to make it 8-2. Knox scored on a wild pitch before Palmer drew a free pass. Kemp followed with a grounder to second that was misplayed as Crawford came home.

Dunbar walked to force in a run, and, after a pitching change, Horn got the first hit of the inning, a single to center. A wild throw to third wound up clearing the bases. Horn cruised into third and scored a moment later on a single by Hernandez.

Sylvan Hills scratched out a run in the top of the fourth but, in the fifth, Crawford took over on the mound. West singled with one out but, he was running when Jacob Hooper popped out resulting in a game-ending doubleplay.

The Sox scored one in the second, two in the third and two more in the sixth to erase any mystery.

Over the first three innings, Bickerstaff threw 34 pitches. Only six of them were out of the strike zone. The only baserunner for Fort Smith came on a grounder that bounced off the first base bag with two down in the second.

Bryant’s run in the second was a result of Dunbar getting hit by a pitch, stealoing second and scoring on a base hit to left center by Horn.

In the third, Knox singled and stole second. Crawford sacrificed him to third and Holt picked up the RBI with a grounder to short.

Palmer reached on an error. He made it 3-0 when Kemp belted a double to right.

Bickerstaff issued walks to Spencer Giles and E.C. Friery to open the top of the fourth. But he settled down after a visit from his manager and escaped. Jetson Wagner popped to Bickerstaff then Landon Rose and Jake Craighead grounded into force outs.

Bryant loaded the bases in the bottom of the fourth. Catton and Bickerstaff walked then Butler singled. But Wagner, the Sylvan Hills starter, induced consecutive grounders to short with the infield in. Both resulted in force outs at the plate. A third grounder to short ended the threat.

With one out in the fifth, Sylvan Hills’ Kayden Kuykendall singled to center. Jake Springs reached on an error. But, with Kuykendall on third, Springs started to steal second only to have Maddox Noel hit a pop to Reid Catton at second. He relayed to Palmer at first for an inning-ending doubleplay.

In the sixth, Bickerstaff worked around a two-out single.

In turn, the Sox added some insurance. Horn walked and Catton sacrificed him to second. Bickerstaff’s grounder to second was misplayed allowing Horn to score. Bickerstaff, who wound up at second on the play, went to third on Butler’s single to right then scored when Knox’ pop behind second was caught despite a collision involving the second baseman and the shortstop. Bickerstaff tagged and scored on a not-so-deep sacrifice fly.

In the seventh, Craighead beat out an infield hit, stole second and went to third on Wes Goodman’s grounder to the right side. But the runner was stranded at third as Bickerstaff got Kuykendall to ground out to Horn at short to end the game.

The Sox finished the summer with an 18-10 record.