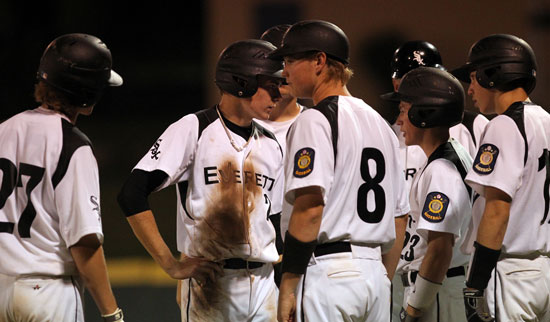 Junior Sox a win away from Regional title after ousting Jacksonville

With the old College World Series bracket format — since discarded by the NCAA but still in use[more] by the American Legion — there’s an extra game for the winners bracket final victor (with the exception this year of the rain-delayed Senior State Tournament). 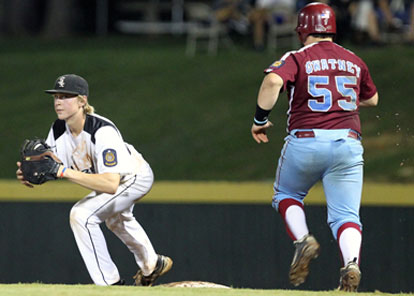 Dalton Holt takes a throw at first to compete a fourth-inning doubleplay. (Photo by Rick Nation)

When it gets down to the final four instead of the three one-loss teams battling it out to get to the title round against the lone unbeaten, that format calls for all four teams to play in the semifinals.

With the winners bracket final victor already guaranteed a spot in the championship game, it invites a team in that position to rest pitching and, if that they lose, they lose. The team that beats them has to come back the next night to play the other semifinal survivor for a chance at a rematch in the championship game while the winners bracket final victor watches and waits for whoever gets through that. 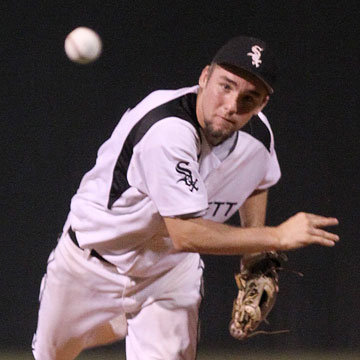 But the Everett Black Sox of Bryant would have none of that this season. They won the extra game at the State Tournament on their way to that title and, on Monday, they did it again, ending the season for Jacksonville Gwatney Chevrolet with an 11-0 romp in five innings, sparked by three-hit games from Connor Tatum and Dalton Holt. Tatum drove in four runs in the first two innings as the Sox broke to a 6-0 lead.

Bryant takes on the Texarkana, Texas, Tigers this evening at 4:30. With a win, the Sox add the Regional Tournament championship trophy to the hardware from winning District and State. Texarkana will have to beat Bryant twice to claim the title.

The Tigers got to the finals by outlasting the Little Rock Post 1 Cobras, 11-10, in nine innings. It was the second extra-inning win for them. On Saturday, it took nine for them to survive Paducah, Ky., 14-13.

Part of the reason for the Sox to go for it against Jacksonville on Monday was the fact that they’re adding to an incredible record for the season. The win improved them to 37-1.

The other part of the reason was, no doubt, they just plain hate to lose. 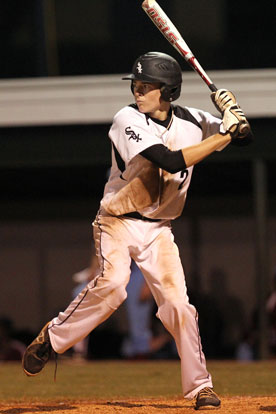 And, on their eve of their final game or games of the season, the Sox had what manager Tyler Brown called, “A great b.p., probably the best we’ve had all year.”

“B.P.” — that would be batting practice.

“It was a very intense b.p.,” Brown related. “Me and Coach (Mike) Lee talked about it last night (after a narrow 6-5 win over the Cobras). We wanted to be a little more intense, with a lot more energy from us coaches. That’s what we’ve been trying to do all year as coaches, to have a lot of energy and a lot of focus. As soon as I walked upstairs, Coach Lee was already into it and I fed off that.”

Jacksonville ended its season with a 36-6 record. Half of those losses have been to Bryant, 5-1 and 5-3 at State before Monday’s blowout.

“You don’t get a lot of opportunities to send a good team home for good,” Brown observed. “We stepped up. We knew what the challenge was and, in the end, we got it done. All around I think that’s our best team win all year long. We produced, just having a plan at the dish. We broke out finally. Hopefully we can carry it over to tomorrow.”

As the visiting team on their home field, the Sox broke out to a 3-0 lead against Jacksonville ace Derek St. Clair, who had thrown 101 pitches on Friday in a win over Texarkana. Drew Tipton was hit by a pitch to start it. Holt sacrificed him to second, Evan Lee singled him to third and walks to Blake Patterson and Hunter Oglesby forced him in. 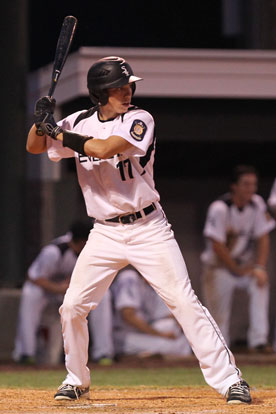 Tatum beat out a single into the hole at short to make it 2-0 then Jordan Gentry came through with the first of three sacrifice flies by the Sox.

“Connor Tatum had a great day,” Brown acknowledged. “He’s putting it wherever he wants it. Holt had a great day. Jordan Gentry had good, productive at-bats.”

Dakota Besancon, who worked an inning and a third of relief on Sunday night, got the start and worked into the third. He pitched around an error and a single in the opening inning.

His teammates cushioned the lead by three in the second. Holt lined a single to center, Lee walked and, with two down, so did Oglesby, setting up Tatum for the big blow of the game. He turned on a 3-2 pitch and drilled it past first and down into the right-field corner for a bases-clearing triple.

Besancon retired the side in order in the second and, in turn, Jacksonville reliever Blake Perry set down the Sox in the top of the third.

Walks to LaDuris Perry and Ryan Mallison around a strikeout in the bottom of the third led to a pitching change. Besancon’s first pitch to Blake Perry brought Brown out. He gave the ball to Patterson who worked out of the inning despite a walk that loaded the bases with two down. 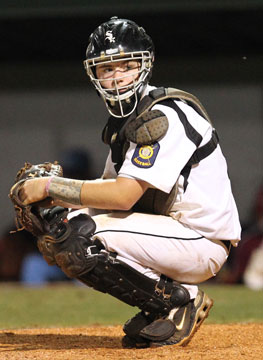 Catcher Bailey Bowers looks into the dugout for a sign. (Photo by Rick Nation)

The Sox revved up the offense again in the top of the fourth with Holt mashing a double to left-center to lead things off. With one out, Patterson drilled a single up the middle. With Holt at third, Oglesby delivered a sacrifice fly to make it 7-0.

Tatum slapped his third hit into left and Gentry delivered with a single to right that drove in Patterson. And when a throw to third trying to nail Patterson got by the third sacker, both he and Tatum scored as well to make it 9-0.

Singles by Brandon Hickingbotham and James Tucker started Jacksonville’s fourth but Tatum started a sparkling doubleplay on a ball hit by Trevor Ransom to take the starch out of the potential rally. LaDuris Perry tapped back to the mound to end the inning.’

Needing a run to get the run-rule into play, the Sox got two in the top of the fifth. Tipton’s fly to left was dropped then Holt singled him in, taking second himself when the ball wasn’t handled cleanly in the outfield. Lee sliced his second hit to left to send Holt to third and Patterson picked up the RBI with a sacrifice fly that would’ve been an extra-base hit but for a sprawling, eye-popping catch by Jacksonville center fielder Courtland McDonald in the left-center gap.

Holt came on to finish it on the mound and, despite a walk to Ryan Mallison and a two-out single by Jones, he got it done. McDonald lined to Patterson at first for the final out.

Connor Tatum dives into third at the end of his clutch three-run triple. (Photo by Rick Nation)