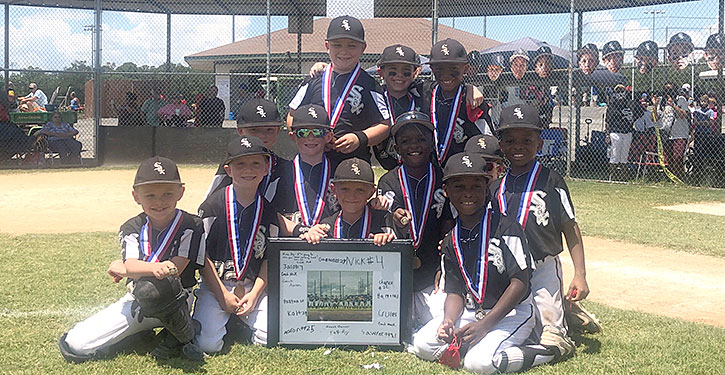 SHERWOOD — The Bryant 7-year-old All-Stars captured the 2020 Cal Ripken State championship for their age division on Sunday, completing a sweep of play at the tournament with an 11-2 win over the rival Benton All-Stars.

The coach pitch tournament includes bunting, which the Bryant team used repeatedly in the title game after using the play only a couple of times on their journey to the finals.

Bryant grabbed a 2-0 lead in the bottom of the first when Smith doubled, and Drake circled the bases on a grounder into the hole at short.

The Sox set down the first six Benton batters over the first two innings and they made it a more commanding advantage with five in the bottom of the second.

Hits by Thompson, McGough and Shook got the uprising started. Kelley followed with a one-out base knock. Smith cleared the bases with a bunt that turned into a triple. Bohanna completed the inning with an infield hit.

Benton scratched out its two runs in the top of the third, but Bryant trumped that with a four-run home third. Billins ignited the offense with a single. Van Hoose doubled into the right-field corner and, with one out, Thompson traded places with Van Hoose.

McGough bunted for a hit and with two down, Joyner drove him home with a triple, setting the final score.

Benton could only manage to get one batter on base in each of the last two innings as Bryant closed out the championship.

Bryant 9’s finish as a hard out against Benton 10’s
August 2 in Bryant athletic history: 2013