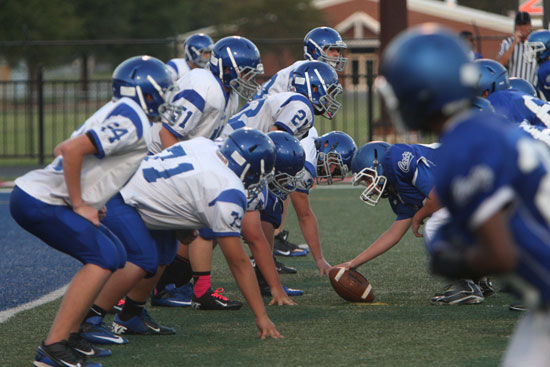 Bethel comeback runs out of time

CONWAY — Despite being down 24-7 at halftime, the Bryant Blue Hornets eighth grade football team of Bethel Middle School put together a furious rally before running out of time just as they drove beyond midfield. The Conway Blue Junior Wampus Cats held on for a 30-22 win in a wild contest at John McConnell Stadium. 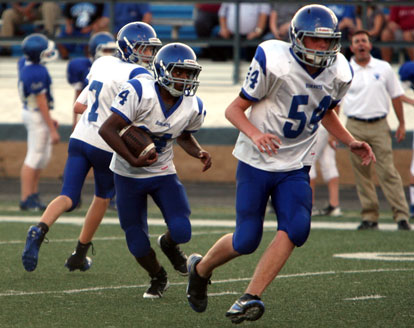 The Hornets were plagued by a big dose of Conway Blue running back Michael George who rushed for over 150 yards and two touchdowns. On defense, he intercepted a pass and ran it in for a score. All three of his TD’s came in the first half.

Along with the interception, Bryant Blue suffered two fumbles in that first half as well.

The Hornets protected the ball in the second half as they made their comeback.

George opened the scoring in the game with a 24-yard touchdown run. A two-point conversion made it 8-0. On Bryant’s second snap, just moments later, Diante Woodson set sail on a 65-yard sprint up the right sideline for an answering score. Luke Welch added the extra point and it was 8-7.

Conway answered with a drive to the Bryant 5 where Richey Fuller was separated from the football and Vail recovered, turning back the threat. 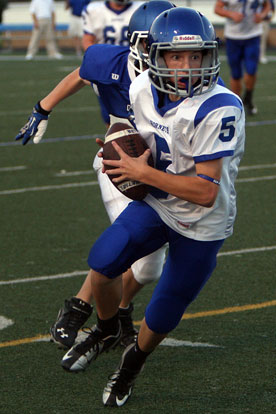 Seth Tage (5) turns upfield after grabbing a pass that he turned into a touchdown. (Photo by Rick Nation)

Two carries by Woodson got the ball to the 22 before a reverse was foiled by George for a loss to the 13. On the next play, however, Woodson took a screen pass from Vail and streaked 50 yards to the Conway 37 only to have the play called back because of an illegal block in the back, the only penalty of the night against the Hornets.

Two plays later, George recognized the same play and stepped in front of the pass returning it for a touchdown. Tyler Farris ran in the two-point conversion and it was 16-7.

A fumble ended Bethel’s subsequent drive. Fuller fell on it at the Bryant 28. On the first snap from there, George slashed for the touchdown. And when Fuller ran in the conversion, it was 24-7 with 2:35 left in the half.

A nice return of the short kick by Luke Curtis gave the Hornets a chance to get back on the board before the break and a 10-yard run by Woodson converted a third down to the 33. Vail’s pass to Parker Littleton got inside the 20 but the ball was jarred loose and Conway Blue’s Cole Hoover recovered, thwarting the Bethel bid.

Reinvigorated after the half, the Hornets put together an impressive scoring march to start the third quarter. A key play early in the drive was a fourth-down pass completion from Vail to Curtis to the Conway Blue 40. On another fourth down at the 32, Woodson made a determined, tackle-breaking run for the first at the 25.

He added an 8-yard run then Jonathan Smith slashed for 11 to the 6. A play later, Vail appeared to have Matt Sandidge open in the end zone but he was tripped by the Conway Blue defender on his move to the ball. Bethel coaches, players and fans lobbied for an interference penalty but none was forthcoming as the officials ruled it incidental contact.

So, on third down, Woodson bashed to the 1 to set up Vail’s keeper for the touchdown with just :22.8 left in the third quarter. Welch added the PAT and it was 24-14. 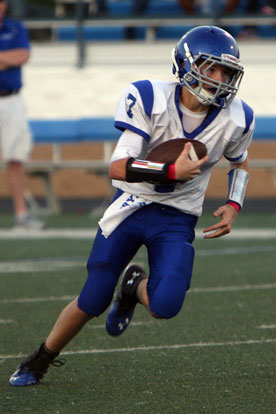 Conway, however, sparked by runs of 18 and 23 yards by George drove for an answering score after recovering Bryant Blue’s onside kick. Quarterback Davis Zimmerman carried it over from the 2. Significantly, the Hornets stopped George’s conversion run. Ryan Harris made the tackle.

A good kickoff return by Littleton helped set up an answering score for the Hornets. From their own 48, Vail picked up 17 yards then 11 more on option keepers. He then found Seth Tate open down the right side for a 24-yard touchdown toss.

Littleton powered in for the two-point conversion and the Hornets were within a touchdown and a conversion of a tie with 5:17 still to play.

Conway managed to recover the onside kick then runs by George and Fuller picked up a first down as well as eating valuable game time. After a penalty pushed the Cats back, Fuller fumbled the ball. In the scramble for possession, he was able to get back on it and Conway Blue was able to eat up a few more seconds before punting the Hornets back to the 14 with 1:42 left.

After Littleton picked up a yard as Bryant Blue tried to catch the Cats rushing too hard, Vail completed a pass to the sideline to Ray who was hit after stepping out of bounds. Despite the protests of Jones, no flag was thrown.

Vail converted a fourth down with a 9 yard scramble then completed a pair of short completions to Ray to reach the 41. With :14.2 left, Vail was flushed out of the pocket and tried to run through the scattered defense. He picked up 12 but the game ended before the Hornets could line up for another play.

Now 2-2 on the season, Bethel is set to play Ridge Road of North Little Rock on Thursday, Oct. 10.