Editor’s note: This is the second in a series about the 2011 Bryant Hornets football team in advance of the season opener against Benton on Friday, Sept. 2.

Not every coaching staff does it this way. Some have a system. The players are coached up to conform[more] to the system. It provides some consistency but it doesn’t always take full advantage of the talents any one group of players may have. Or lack. 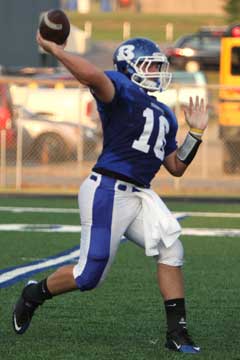 At Bryant, however, the coaching staff has a knack for assessing the strengths and weaknesses of their players and adapting their schemes to best take advantage of the one and minimize the other.

On defense this season, the Hornets will emphasize a 3-4 base rather than their standard four front. (See related story, here)

On offense, an adjustment has been instigated as well. In 2011, there will be less pro-I — the base offense over the last few years — and a whole lot more spread.

Having strong-armed quarterback Hayden Lessenberry back is a big part of it. As a 15-year-old sophomore, Lessenberry was thrust into the starting spot from the very start when senior Blake Davidson couldn’t go with an injured shoulder.

Unofficially, he wound up throwing for 1,287 yards and six touchdowns with just four interceptions, completing 102 of 153 passes (67 percent) and leading an offense that piled up over 2,100 yards for the season.

“One reason is Hayden,” acknowledged offensive coordinator Dale Jones, who coaches quarterbacks and running backs. “Another reason is that our offensive line is quicker and our skill guys — it’s the fastest skill guys we’ve ever had. Our outside guys are fast, our slot guys are fast and we’ve got four running backs that run 4.6 or faster (40 meters). We’ve got such good skill guys.”

The top returning back is senior Karon Dismuke (5-9, 180) who rushed for 640 yards and five touchdowns last season despite missing time with injuries. Junior Jalen Bell (5-7, 155) picked up 212 yards on just 46 carries and caught four passes for 57 yards, scoring three times last season despite battling injury as well. Junior Ben Clark (6-1, 215) didn’t play varsity last season but he’s the little brother of Stephen Clark who graduated after leading the team in rushing last season. In addition, senior Caleb Thomas (5-8, 150), who’ll play a lot in the secondary, has worked this fall at running back. 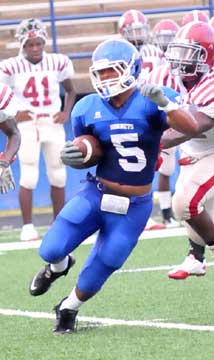 “Those skill guys and our not having the big, monster returning offensive linemen that we’ve had for two straight years,” he mentioned in regard to the switch to the spread. “Those big ol’ boys all graduated. We’re smaller up front but we’re quicker up front so we’ve spread it out.”

Lessenberry (5-10, 185) will be the trigger man. Jones indicated that the junior’s experience with a more complex scheme last year makes him even more effective in a somewhat simpler approach this season.

“Being a sophomore and having to take the reins like that was tough,” acknowledged the coach. “He soaked up as much as he could but he still was a kid that was 14-year-old until the week of the Salt Bowl. Having so few returning starters back, it’s nice to have one back that’s pretty comfortable with the offense.

“Especially the stuff we put on him because we were a lot more multiple,” Jones noted. “Formations and shifts and bumps and all that stuff, it was so much more on him as a sophomore. This year, he’s getting to read the safety, read the outside linebacker, read the corner — a lot simpler stuff.”

And he’s picked it up so well, he’ll be given the opportunity to change plays on his own at the line of scrimmage if he sees something open up. Last year, Jones explained, if the defense lined up with an opening and they coaches wanted to change the play, they’d have to get Lessenberry to pause, read the signals from the sideline then make the call to his teammates while, oftentimes, the defense adjusted to, at times, cover up that weakness the new play was intended to take advantage of. Now, Lessenberry can read the defense and go to something immediately to exploit it.

“He’s very intelligent,” Jones stated. “We’ve given him more responsibility this year. If he sees a different look than we’re expecting or if we have a play to the three-receiver side and they’re daring us to throw it to the single-receiver side, he knows he can check the play and throw it.”

Lessenberry will be backed up by a talented sophomore Wesley Akers (6-0, 175) but he has only been cleared to play this week after being sidelined with an emergency appendectomy. 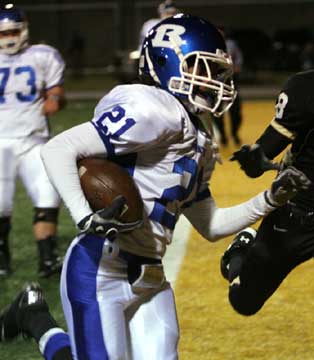 “I feel like Wesley, because he was off a few weeks, is a little bit rusty on his reads and on the timing but he did that in the spring and caught up real fast so I’m expecting, in the next week or so, for him to catch up rapidly and he’ll be good to go,” he added.

“Now because Wesley was hurt, it gave Karon the opportunity to get a lot of snaps at quarterback,” the coach mentioned. “And he’s done a really good job of taking that on. He’ll play some quarterback.

“I’ll be honest, when we thought that Wesley might not be ready for the Salt Bowl, we were a little worried until Karon stepped up,” Jones said. “He is a totally different kid than he was when we worked him at quarterback last year. He’s not going to make a living reading defenses but he knows where the soft corner is or where to throw the football. He’s a lot better about his decision-making. So, we’re pretty comfortable with it now. We feel good about all of them.

“Devonte Howard (5-8, 150) will be our sophomore quarterback,” he mentioned. “He’ll be taking snaps on Monday nights.”

Turning to the running backs, Jones said, “If Karon can stay healthy, he’s probably going to have a good year. Jalen got quite a few reps last year and he’s good at catching the ball out of the backfield too. Ben Clark is going to spend more time at running back than at slot receiver. He’s showed us in practice the last few weeks when he’s gotten more reps at running back. He’s looked quite a bit better than he did at first. Caleb didn’t move to running back until August but he’s been doing a pretty good job for us. 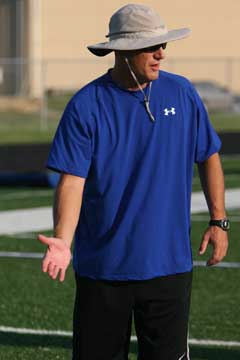 “We’re excited about all four of them,” he related. “They all have great vision. Jalen probably has more of the ‘make-a-guy-miss’ ability. When he gets it in open space — you know, he was a big contributor on screens for us later year.

“Karon does a little bit of everything,” Jones continued. “He can run over you, he can make you miss. Ben is more of a straight line — he makes a real quick decision. He’s going to see one little crease and stick his nose in there. Caleb, we were looking for depth at running back and he wanted to do it. So he came over and tried it. He’s just like the other three, he can fly. And he’s got pretty good vision. They all have good qualities.

“All of them need to improve their protection,” he noted. “Pass protection’s going to be critical for the running backs.”

Jones acknowledged that most of the offense will be run out of the shotgun or pistol formations.

“There may be some situations — short yardage or goal line — where we get under center,” he said. “Our centers and quarterbacks have been working under center three or four days a week. But, right now, as far as pass ‘skel’ or any team activities, we’re always shotgun or pistol.

“If we get in a bind, we could pull Jacob Powell (5-10, 166) over (from defensive end),” the coach added. “We have a couple of two-back things where we bring him in at fullback or (linebacker) Tyree Reese or where Ben plays fullback and Karon plays tailback. We’ve got a lot of options there. That’s the one place that we’ve got depth, at running back.”