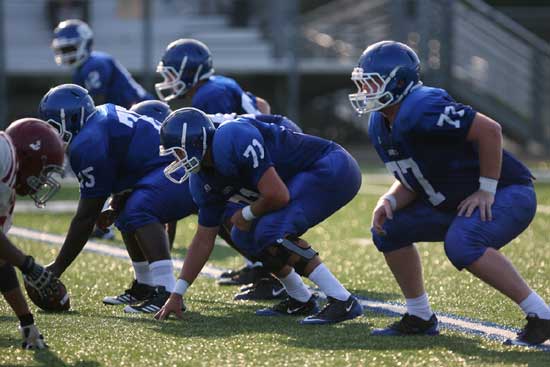 Editor’s note: This is the sixth in a series about the 2011 Bryant Hornets football team in advance of the season opener against Benton on Friday, Sept. 2.

If you take the entire group of offensive linemen that will[more] start or back up the starters for the 2011 Bryant Hornets, that’s the extent of the experience.

Needless to say, beyond feeling the normal pre-season urgency of being head coach, Paul Calley is feeling the strain a bit this preseason. He’s the offensive line coach too and, along with his young charges, he knows full well that, more than a little bit, a key to the team’s success this season will be the development in the trenches.

They have a tough act to follow. Over the last two years, the Hornets have had one of the biggest, strongest offensive lines the program has seen.

The new group not only doesn’t have the experience that one had, it’s smaller. But it’s quickness and mobility helped Calley decide to return to the spread offense this season after running the ground-oriented pro-I over the last three seasons.

“They’re getting there,” Calley assured.

The two games of starting experience belong to junior Kordell Boykins (6-1, 235) who will be working at guard on one side with junior Blain Jackson (6-0, 225) starting on the other. Senior Jason Simpson (5-9, 235) will play some too.

Junior Cortez Williams (5-8, 280) is the new center. He played some on the defensive line last year and may help there on occasion this season.

“He’s got the build for (center),” Calley said. “He’s strong, weighs about 280. You’ve got to have that anchor in the middle. He doesn’t get knocked back.”

The starting tackles are 6-2, 265-pound junior Ian Shuttleworth, who was battling Hodgkin’s Lymphoma last spring but with therapy has stunningly overcome it, along with senior Seth Alkire (6-1, 240).

“I’d like for Jordan Jones, who’s a sophomore, to figure in the mix,” Calley said. “He’s still a little ways away from being ready to play but he’s probably more of a natural tackle than Seth just because he’s longer and he weighs a little bit more.

“I may continue to shuffle things around a little bit,” he allowed. “Blake Hobby’s another guy that’s got to figure in somewhere and give us some good time at center and tackle.”

Calley indicated that it’s still a work in progress.

“Some of them know the offense really well,” he related. “Some of them don’t know it at all and are having a hard time learning it. To me, it’s simple but you’ve got to spend a little time with the playbook to get yourself ready.

“You’ve got to follow your rules,” the coach explained. “We have rules on everything that we do.”

And those rules aren’t much different if at all than what the team was utilizing last season.

“We tried to keep the same rules in pass protection and run blocking,” Calley acknowledged. “We just cut about three-fourths of what we were doing out. We don’t have near as much as what we had. And we’re still struggling to pick some of it up.

“Getting them to understand down and distance and situations, knowing that if it’s third and short that the defensive end is more than likely going to try to cross my face or the defensive tackle is going to try to penetrate rather than getting his hands on and reading,” he said in illustration. “You’ve got to put yourself in position to make the block. You’ve got to take the right step and if you take one false step, it’s going to cost you. That’s the hardest thing to get them to understand.”

Short yardage remains a concern. Spread teams admittedly often have trouble running the ball, particularly when the field gets compacted in the red zone.

“As we go, we should get better,” Calley asserted. “We hadn’t seen a lot of hard rush on the edge until we played Pine Bluff. Of course, we can’t simulate that in practice. We’ve got to do the best we can, trying to get ready for those hard outside pass rushers. If we’re going to try to throw five-step drop-back passes, we’ve got to be able to protect.

“You’ve just got to have reps at it,” he added. “The more you do it, the better you understand it and you know what’s coming and you’re ready for it.”

The challenge has been laid out. Don’t be surprised if these guys meet it.