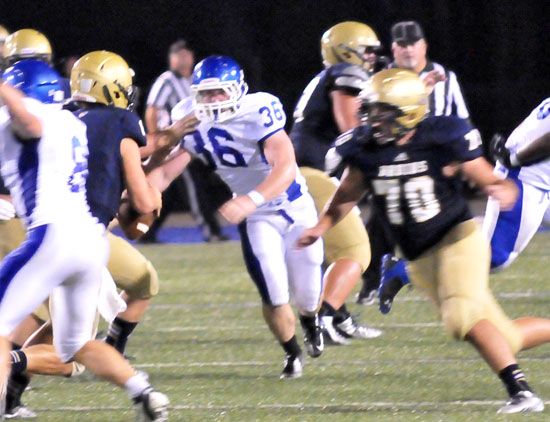 The 2013 Bryant Hornets will need new starters to step up in several spots this season to make it as successful that they desire, but nowhere is that a bigger challenge than on the defensive line where those on the projected two-deep combined for 27 varsity tackles last year. And 25 of those were from one player.

“Austin May played some last year, more (varsity) time than anybody,” he noted. “He’s done well. He’s very athletic. He’s worked hard in the weight room. I’m looking for him to supply some good leadership.”

May is a 5-11, 200-pound senior who did a good job of pressuring the quarterback in the Hornets’ pre-season scrimmage, particularly in the second half against Pulaski Academy.

“Burton has moved from linebacker,” Stroud mentioned. “He did well against Pulaski Academy, did some good things.” 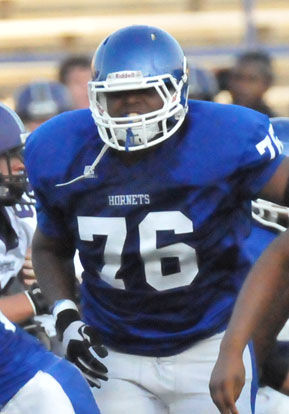 Those “good things” included an interception that he returned for a touchdown.

“He just recognized the screen,” said Stroud, who noted that most of the time, Burton will be rushing the passer. “He read it, saw the quarterback was fixing to release it and just jumped out there and got it. He was being a football player. It sure came in handy, didn’t it?”

Inside, a pair of underclassmen have earned starting nods. Both have the size to mix it up. Sophomore Cameron Murray is 6-2, 288. Junior Noah Flores is 6-0, 250.

“Murray’s done pretty well,” Stroud commented. “He’s surprised me a little bit on picking things up. He’s still got a few things to learn but, at 288 pounds — I’ve never coached a guy that big. We’ve worked on him trying to stay low and not getting picked off by people.

“Flores gimped up his hamstring a little bit,” he added. “He hasn’t practiced much in the last couple of weeks but I’m really looking forward to seeing how he does this week. He’s a big, strong kid. We’d like to have Friday but, if need be, we’ll hold him out.”

“They can give us some help a play or two here and there,” Stroud stated.