Kurt Calley will open his senior season as the starting center for the Bryant Hornets much like his dad (and head coach) Paul Calley did years ago with the Gurdon Go-Devils. 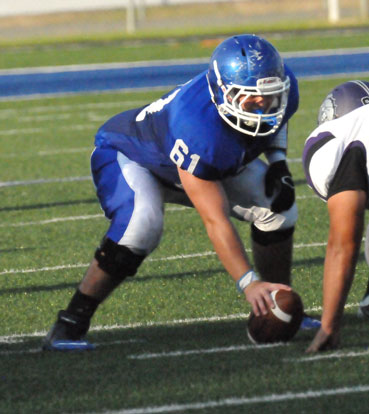 Kurt is the hub of a seasoned offensive line that’s a big reason the fans, coaches and players are excited about the team’s prospects in 2013.

With new starters at quarterback, running back and three of the four wide receiver spots, a solid, experienced offensive line is invaluable.

The line is anchored by senior Jordan Jones (6-3, 285) at right tackle, a pre-season pick to the ArkansasVarsity.com All-Senior team.

At the guards, senior Jacob Ward (6-1, 220) was set to start at left guard until he broke a couple of fingers on his right hand. Coach Calley moved him to the right side and switched senior Seth Hoffmans (6-0, 215) to the left side.

“They’re all interchangeable pretty much,” Coach Calley said. “They understand the system. I think a year in the system has helped them. It’s going to make us better down the road. I feel like we are way ahead of where we were last year. In order for us to be able to execute offensively, all those guys have to do their job and do it well.”

In addition, tight end senior Dalton Greismer (6-0, 210) returns with junior Jimbo Seale (6-0, 205) serving as the second tight end. Senior Wesley Akers (5-11, 195) is back at H back and wing, helping with his blocking as well as serving as a receiver and occasional running back.

Calley said the line has to be versatile in his system. “And they have to identify a lot of changes in the fronts,” he added. “There’s a lot of things they have to know and I think they’ve done a really good job of grasping what we need them to. We’ll be able to make changes at the line of scrimmage.

“Starting out against the competition we’ll be playing will help us down the road,” the coach said, referring to pre-conference battles against Class 7A teams Conway, Little Rock Central and Little Rock Catholic, former Central Conference rivals.

“We’ve been fortunate the last eight years to have a favorable schedule where it progressively got harder,” Calley mentioned. “Not so now. Playing three quality 7A teams to start the season is difficult so those guys (on the offensive line) have got to be on top of their game early on.”