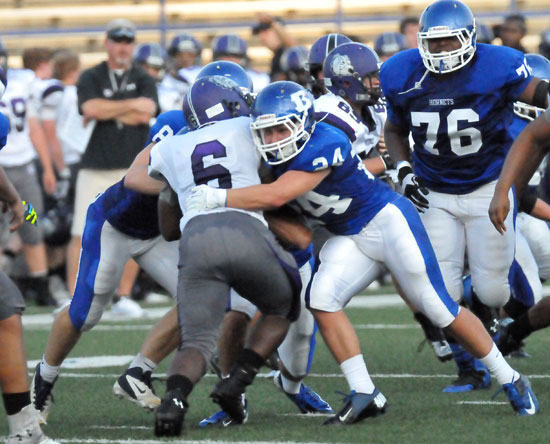 The 2013 Bryant Hornets defense will benefit from the return of three of its five leaders in tackles including the top two, Davis Nossaman and Jake Johnson. Both were safeties last year and Johnson returns to that familiar role. Nossaman, however, has been moved up to linebacker where he and Bryce Denker figure to provide a great deal of leadership to go with their playmaking ability. 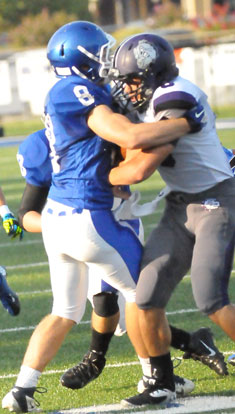 “We feel very good about those two guys on the outside,” acknowledged Steve Griffith, the Hornets linebacker coach and defensive coordinator. “Denker was there at the weak-side linebacker last year, playing most of the year there and he’s back. He’s got experience. He’s a little bigger, a little faster.

“Nossaman has moved from safety down to the Sam backer,” he continued. “We’re trying to take advantage of his aggressive nature and get him in some situations where he can go make plays at the line of scrimmage and in their backfield.”

Nossaman was in on a team-high 98 stops and has received some pre-season mention on a statewide scale by being touted by ArkansasVarsity.com. Denker, who also will be back punting for the Hornets, made 52 tackles incuding three for losses. Each had two interceptions.

“Backing up those guys right now,” Griffith said, “we’ve got Kyle Lovelace and Ryan Hall, a couple of juniors that are just needing to get more experience.”

The Hornets appear to have solid depth inside.

“(Junior Connor) Chapdelaine has shown his ability at the Mike,” the coach mentioned. “He kind of took the lead in the spring at the position. (Junior Hunter) Fugitt, who played last year, is very solid and can play at any time. And when we want to go to our four-backer set, we’ve got (senior) Tanner Rich who can play the Bob as well as Fugitt. Devin Howard is a sophomore who gives us a fourth guy that can help us out on the inside if we need him.

“The individuals are very accomplished,” he related. “Now they don’t all have a lot of experience.

“Fugitt did get some last year. I felt like he played extremely well against P.A. (Pulaski Academy in a preseason scrimmage) last week, really stepped up his game from where we were in the spring,” Griffith noted. “He really showed some quickness and some decisiveness that we’d been looking for.”