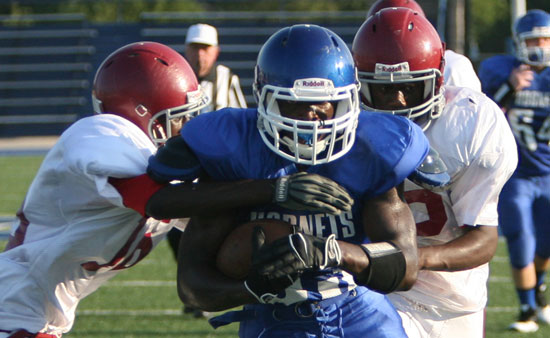 The Bryant Hornets freshman team opens the 2013 season tonight at Hot Springs Lakeside following an eighth grade tilt between the Bryant White Hornets of Bryant Middle School and the Lakeside Junior Rams, which kicks off at 5:30.

Hayden Knowles will be one of the freshman Hornets inside linebackers. (Photo by Rick Nation)

“We feel pretty good about our running game,” he said. “We’ve got two pretty good running backs, Cameron Coleman and Phillip Isom-Green. We feel like we’re going to move the football pretty good if we can run it. These two guys may be two of the better backs we’ve had here in a long time. They have the potential to be.”

Beau Bonvillain will be the starting quarterback.

“Beau’s has had a good camp,” Horn said. “He’s going to be our guy. He’s throwing the ball well — real well at times. We feel like we’re going to be able to throw it a little bit but we’re really going to try to concentrate on running the football, more than we have in the past. We’ve thrown it a lot in the past but last year, we ran it more because we felt like we had a pretty good combo back there. We feel like we’ve got it again.”

Trey Ashmore and D.J. McKinney back up Bonvillain.

“Landon Smith will factor in at receiver and corner for us and he’s also a quarterback, with a little bit different skill set,” the coach mentioned. “We’ll use him for some option-type stuff. Running is his strength.

“Austin Kelly is a wide-out for us. He’s a big, tall guy. He’s going to play some defense for us too. We’ve got some guys in the slot who are pretty fast and quick too. Jake East, Jesse Smith and Jeff Hastings are going to give us some help there. Garrett Misenheimer will play some at outside receiver too but he’s starting at linebacker as well.

“We’re pretty good size there,” Horn said. “The two tackles are six-foot tall, 220 pounds. We feel we’ve got some guys that can provide some movement up front and probably protect the quarterback okay.”

Defensively, the Hornets’ abilities have led to a slight change in tactic.

“I think this year, with as fast as we are, we’re probably going to be a little more aggressive than we have in the past,” Horn stated. “We’ve kind of been a read-and-react type of defense but I think since we’re faster than we have been, we’re going to take a few chances here and there and try to get after some folks with those guys. They can cover some ground.

“I really like what I’ve seen defensively,” he noted. “Like on offense, we have quite a few skills guys that can run so we’ve got those guys out there on the field.

“Marvin Moody is going to be one of our outside linebackers. DeAmonte Terry is at the other outside spot. They’re both very good athletes. Hayden Knowles and Garrett Misenheimer will be in the middle for us.

“Our corners are going to be Caylin Allen and probably Landon Smith,” Horn continued. “Zach Lewis is going to be in the mix too. We’ve got three guys at corner so we think we’ll be okay there. We like the two safeties.

“Up front, I’m not really sure,” he allowed. “Nathan Mayes, Madre Dixon, Chandler Davis will play up front. Chase Fox and London Taylor are going to get some reps up there too. LaRae Williams will probably be starting inside for us.

“They’re adequately sized. If we can just get those guys up front to plug some gaps and let the linebackers run, we think we’re going to be okay. We’re pretty athletic in our back seven.”

As for special teams, Kelly will handle the punting and Chase Kincaid will take care of placements.

“Chase place-kicks it well,” said Horn. “He’s going to be our extra-point, field-goal and kickoff guy. He was hitting 30-yarders out here in practice the other day. Anytime you get a guy that can kick, especially at this level, that’s a weapon. Three points is big no matter where you are but especially in junior high.

“Kelly is the type of guy that can turn the field over,” the coach mentioned. “He’s got a very good leg and we’re going to be able to do some other things with him.”