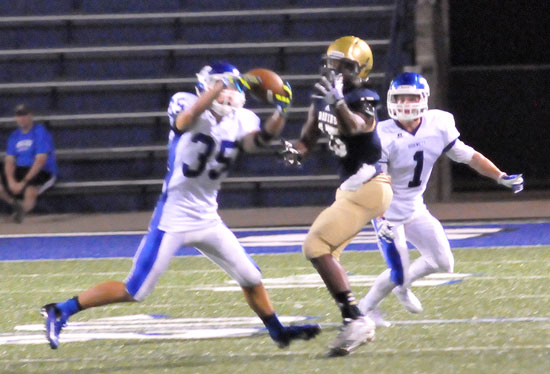 It’s been a different kind of fall for Bryant Hornets secondary coach John Wells. And he likes it.

“Usually this time of year, I’m slowing down, we’re starting from scratch because we usually have two, maybe three of my guys that haven’t played before,” he explained. “And the goal is, by the time conference gets here, we’ve got what we need in.

“With the experience coming back, we’ve really just picked up where we left off (last year) and, as a coach, it makes it a lot of fun because we’ve got a lot of what we do in and from that we can really tweak things,” he continued. “It’s an exciting group of guys.”

The returning players are both cornerbacks, juniors Drew Tipton and Mark Nelson along with senior safety Jake Johnson, who was second on the team in tackles last year. Johnson and Tipton each had two interceptions and Nelson one. Tipton broke up a team-high eight passes.

Junior Ben Bruick will play alongside Johnson at safety. They’ll be backed up by junior Steven Murdock and sophomore Jaelyn Jones. Providing depth at corner are seniors Brenden Manley and Noah Varner along with sophomore Simeon Watson.

“I look back at Conway (last year) and he’s out there,” Wells said of Tipton. “He was already a full-time player out there playing field corner (as a sophomore).

“Our corners, we’re keeping them field and boundary just because we’ve done that since day one,” he mentioned. “I feel like they have some characteristics that are different. And I think Tipton is probably leaning toward that field corner characteristic more than the other corners.

“He plays the deep ball well, which you want your field corner to do,” the coach related. “He’s usually a guy that can track a ball better than any of them and he feels comfortable in space. The guy has to have a lot of confidence. With him playing as many games as he did last year, I think he’s probably one of the most confident guys I have back there, which is good. You’ve got to have a little swagger when you play in the secondary. You’ve got to be confident because bad things are going to happen at some point and you’ve got to bounce right back.”

Nelson, Wells said, has unique qualifications for the boundary corner.

“He could play the field if we wanted him to but he’s able to play tight man coverage,” he said. “He’s able to play run support. Now, usually when I say run support, it’s a guy that, when a run comes to him, he makes sure that he turns the ball back inside to the linebackers or makes the play. Usually when you think of a guy containing or supporting the run, it’s a big linebacker type. The thing with Markevious is I’ve seen few receivers that can get a hand on him. So we’re able to use his quickness to get to that line of scrimmage and contain the run. When he gets by them, the only thing they can do is clip him.

Of the safeties, Wells said, “They’re really interchangeable. They’re very similar. They can play both field and boundary. They can play over tight ends. They can widen out. So we have some flexibility with the safeties. I’m very confident in both. Jake played all last season so he has more experience. We’ve gotten a lot out of Jake. He’s a good tackler, very aggressive. He’s usually integral to our game plan each week.

“Ben improved a lot last year during the JV season,” he continued. “Ben has a lot of knowledge because we’ve worked him at linebacker and at safety. That’s helped him. His improvement has been being able to play the deep ball and fill that alley on runs.”

Manley is a move-in from Bentonville.

“And we’re glad to have him here,” Wells stated. “We really feel like he’ll be able to help us. I feel like he’s probably more of a field corner. He does have some experience playing up at Bentonville. Of course, he’s been around a team that’s battled for the State championship the last two years.

“Noah Varner is a guy that I have complete confidence in that could step in at either side and will do what we want him to do,” the coach said. “He’s not the fastest guy we have but his coach-ability and his technique helps make up for that. He had a really good Blue-White scrimmage.

“Simeon Watson is another one that I look for to come on. He’s a lot like Markevious. He’s quick. He’s 10th grader and he’s building his technique. He went through the spring and got quite a few reps. He can help us in the near future.”

Regarding Jones and Murdock at safety, Wells mentioned, “Not a lot of experience there. In fact, Murdock was a corner last year. Jaelyn is a sophomore. I’m getting them a lot of reps. In fact, there may be times when somebody looks out there at practice and may think they’re the two starters. But they’ve got to because they’ve got a lot to learn. They need as many reps as possible in practices and scrimmages.

“We have some depth at corner, which is good because week one we’re seeing a power team but who knows, week two and three, we may see four and five receivers,” he summarized. “It’s good to have that kind of depth. We’ve got to have solid guys in the secondary because we may have five or six in the game at one time especially against teams that throw the ball.