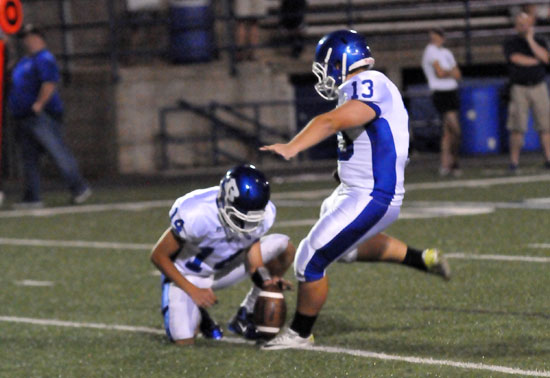 It’s safe to say that the Bryant Hornets’ kicking game is in good hands this season but it might be more accurate to say it’s in good feet. 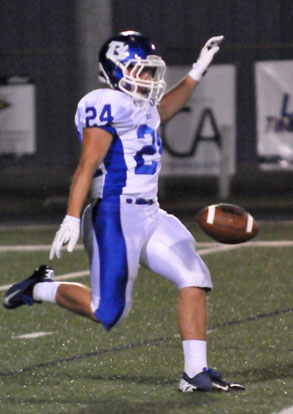 Bryce Denker will once again handle the punting chores for the Bryant Hornets in 2013. (Photo by Kevin Nagle)

The Denker legacy continues for the Hornets as Bryce, a senior, and Alex, a junior, continue the kind of work that made older brother Jace a star at Bryant and a current member of the University of Central Arkansas team.

Bryce returns as the punter for the Hornets while Alex takes over most placement duties from graduate Josh Lowery. Bryce, an outstanding special teams player in coverage, will be handling kickoffs.

“I was telling somebody the other day, you never met a Denker that couldn’t kick,” quipped Bryant special teams coordinator Dondre Harris. “The Denker legs will be flying high this year.”

As for the coverage, the coach said, “Just about everybody’s back on the coverage team except for Aaron Bell. Denker, (Davis) Nossaman and we’ve got a headhunter James Gibson. He loves it. That’s what he lives for. We even have to tell him to dial it back (in practice).”

Devonte Howard will return punts. He’s backed up by Drew Tipton. Deep on kickoff returns will be Brushawn Hunter, Howard and Markevious Nelson.

“Those are the guys that’ll try to take it to the house,” Harris said. “You know, Brushawn, when he gets the ball in his hands, he can go to the house anytime. Hopefully, he can put one in Friday. If we can put one in every Friday, we’ll be all right. We’ll make (offensive coordinator) Coach (Lance) Parker’s job a lot easier.”

Austin May is the punt snapper. Kurt Calley does extra point and field goal snapping. Madison Schrader is the holder.