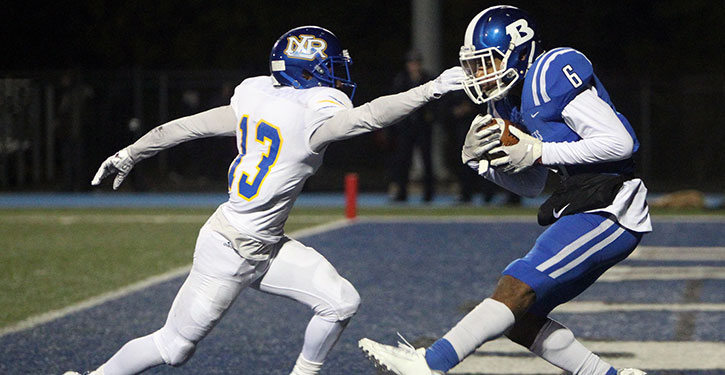 Going into the 2019 football season, the Bryant Hornets, after winning their first State championship in 2018, had some holes to fill. The offensive line was decimated by graduation. The program’s all-time leading rusher was gone, and they had a young quarterback who had shown flashes as a sophomore but hadn’t carried the weight for entire games.

Three sophomores, Will Diggins, Jason Shifflet and Brooks Edmonson developed into tremendous offensive linemen. Ahmad Adams and a move-in, Tanner Anderson, filled in nicely at running back and that young quarterback, Austin Ledbetter, bloomed into one of the best in Hornets’ history.

The team also got a lift from a pair of junior receivers, Joseph Young and Hayden Schrader.

The result was a 13-0 season and another State championship in which the first-team offense rarely played beyond the first series of the second half. The Hornets amassed nearly 6,000 yards of offense and outscored the opposition 560-114.

Ledbetter passed for 3,322 yards and 43 touchdowns. Adams and Anderson combined for over 1,500 yards rushing. Schrader and Young caught 84 passes between them for nearly 1,500 yards.

All behind what developed into an outstanding offensive line.

Now all those guys, except Adams, are back for their senior seasons in 2020, hopeful that the COVID-19 virus won’t rob them of their final campaign and a shot at a third consecutive State crown.

“With Ledbetter and (Carson) Burnett and Cory (Nichols), I think we’re pretty solid at quarterback,” said Hornets offensive coordinator and quarterbacks coach Kirk Bock. “And all of them, right now, are better than they were last year. So, they’re on the right track.”

Ledbetter and Burnett, a junior, are agile and have good mobility but Nichols, a sophomore, is fast and athletic adding a running dimension. As a freshman, leading the Hornets to a 10-0 season, he threw for 1,183 yards and ran for 689, scoring 12 touchdowns.

Diggins and Shifflet form the left side of the Hornets’ offensive line. Edmonson is the right tackle.

“Those three have kind of been battle-tested,” said Hornets offensive line coach Shane Clancy. “Some of the other guys, it’s their first time to be in the hot part of the fire.

Senior Jack Powell will be the center after getting a lot of work in those second halves for the back-ups. And his role increased late in the season. Parker Elswick, another senior, is set at right guard.

Behind them are Grayson Freel and Octavio Resendiz on the right side, Hayden Walsh at center, and Gage Alexander and Justin Orender on the left side.

“We’re just trying to make up for lost time and, hopefully, they’ll be able to perform up to the level of those guys before them,” Clancy said. “We’d love to see it.”

Head coach Buck James has said that, with Anderson and senior Jamarien Bracey, a move-in from Rison where he rushed for over 1,000 yards last year, plus senior Xavier Foote, the Hornets may have the best corps of running backs they’ve ever had.

“We’ve got another senior Mytavious Singleton then Chris Gannaway has gotten some reps there as a sophomore,” said backs coach Adam Pendergrass.

“But those three seniors, Anderson, Bracey and Foote, are as good as anybody we’ve played against,” he added. “It’s good to have a lot of depth.

“Tanner has really improved his ball-catching skills out of the backfield. That opens up a whole new weapon. And Bracey had done a great job. He’s really developed and he’s a hard-nosed downhill runner. Foote has also been a good solid between the tackles runner and also does a good job of catching the ball.

“We feel real fortunate to have those guys back there and hopefully we can find different ways to get them the ball,” Pendergrass concluded.

Schrader is a strong, tall target for Ledbetter. They’ve been teaming up for several years dating back to junior high. Schrader has the size to play some tight end. Last season, he caught a team-high 61 passes for 915 yards, second only to Jake Meaders.

“With (senior) Clay Curtis breaking his hand, we’re trying to get a sophomore to step up,” said receivers coach Julian Jones regarding the backup to Schrader. “Right now, it’s been Braylon Brown, but we’ve got another kid, Donald Miller, a move-in from Chicago, that’s shown us some promise too.”

Young caught 23 passes but his average yards per catch set a school record, an average of 23.5 yards.

Nichols and another sophomore Jordan Knox will be set at the other two spots.

“Behind Cory, we’ve got (junior) Robert Hendrix,” mentioned Jones. “There’s kind of a battle for that second spot there.”

Regarding Knox, the coach said, “He’s kind of owned that Z spot. He’s been a real bright spot for us. Nobody’s been able to cover him. He’s so fast.”

Senior River Gregory, who has been out with a back injury, is about set to return to work at Z as well.

“I feel pretty confident,” Jones said. “We’re a lot faster this year. Cory is obviously not Jake, but he adds a dimension. He’s a little bit faster and little bit shiftier. Though his hands aren’t quite as good, and he doesn’t have football smarts of a senior. He’s a sophomore.”

Special teams are anchored by returning placement specialist Brock Funk who only got three chances for field goals (making two from 43 and 25 yards). But he was 75 of 76 on extra points and was versatile and effective on kickoffs. And he was able to get some work in at a few kicking camps this summer.

Schrader continues as the deep snapper with Schroeder taking on the duties as holder.

Ledbetter punted most of his sophomore year and some early last fall. But James says they’re going to try to avoid that this season.

Funk may get those duties as well though Davis will also get an opportunity.

“That’s what we plan on doing,” James said. “Austin can do it, but I think between those two guys we can get something done there. And we’ve got a couple of other guys we’re working also.”

One of those, sophomore Malachi Graham, was actually pulled up to help with the punting last year after the freshman season but, James said, he suffered a slight injury in the last freshman game of the season and didn’t get a chance to punt.

“He has a strong leg,” the coach said. “He’s an athletic kid and he hits the ball hard. Now, he’s got to learn to punt but he really explodes into the ball.

“The biggest thing for punters is catching the football,” he mentioned. “Noah’s used to that. With Brock, we’re worried a little about his catching the football because he doesn’t ever catch a football. He kicks all the time. And he’s a great kicker for us. If he can get to where he can punt, that’ll help us.”

Returning kickoffs will be Anderson, Young and Bracey along with Myles Aldridge. Nichols, Davis and Schroeder will run back punts.