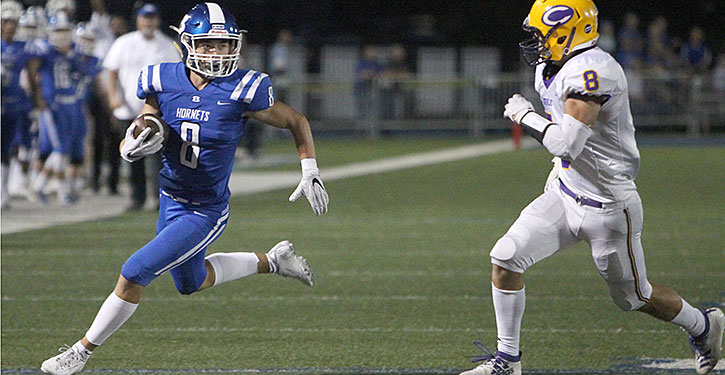 For a little while, the top-ranked Bryant Hornets had a bit of a challenge on their hands. On their way to their third touchdown, they suffered a rare turnover. An Austin Ledbetter pass deflected off of the shoulder pads of his intended receiver Tre’vun Herron near the 15-yard line and fell right in the lap of Little Rock Catholic’s safety Jackson Daniel. Catching it on the run, Daniel sprinted 90 yards for a touchdown, cutting Bryant’s lead to 14-7.

And, on the Hornets’ next possession, going for it on a fourth-and-2 at their own 44, running back Ahmad Adams was stopped for a one-yard loss and the Rockets took over with designs on tying the game with 10:51 left in the half.

Thanks to a 10-yard burst by Brian Alsbrook, Catholic reached the 27. A third-down penalty against the Hornets moved it to the 22.

But that’s where the defense stepped up and set the tone for the rest of the game. On third-and-2, safety Tamaurion Wilson charged up and dropped Alsbrook for a 2-yard loss on a would-be sweep. On fourth-and-4 at the 24, Bryant linebacker Tristan Sehika and defensive lineman Austin Bailey met at the quarterback, dropping the Rockets big (6-1, 250) signal-caller Jordan Eddington for a loss of 9.

The Rockets were unable to muster another first down the rest of the half, while the Hornets reeled off 28 points in the last 8:20 of the half on the way to a 42-7 halftime lead that instigated the sportsmanship or mercy rule for the second half, meaning a running clock. In five wins this season, the mercy rule has been in effect for most, if not all, of every second half.

This time, the Hornets’ reserves added two second-half scores on the way to a 56-7 romp.

Ledbetter, in just the first half, completed 15 of 20 passes for 275 yards and two touchdowns. Adams added 102 yards and two scores on 10 carries. Tanner Anderson scored twice while Tayvin Jones and Xavier Foote each accounted for a second-half TD run.

The Rockets wound up with just seven first downs in the game and three of them came on the opening drive of the game, one of those by penalty. They reached the Bryant 33 where on a second-and-8, David Shifflet and Cameron Scarlett stopped Eddington for no gain. On third down, Bailey pressured Eddington who threw an interception. Safety Austin Schroeder made a leaping grab at the 17.

Bailey spent much of the first half in the Catholic backfield.

From the 18, the Hornets needed just four plays to produce the game’s first points. Adams had a 22-yard burst just before Ledbetter found Joseph Young on the left sideline. Young turned it into a 43-yard touchdown.

Brock Funk, who was good on all eight extra points, made it 7-0.

And, in the Rockets’ second play of the next possession, running back Jason Stith was smacked by Scarlett. The ball came loose, and Hart Penfield recovered for the Hornets at the Bryant 48.

Moments later, the Hornets faced a fourth-and-5 at the Catholic 37. Ledbetter hit Meaders with a pass that turned into a 29-yard gain. Two runs by Anderson got it in the end zone and it was 14-0.

Kyle Green stopped a running back for 1 yard then Bailey sacked Eddington and the Rockets went three-and-out. Daniel punted out of his end zone and Bryant got the ball back at the Catholic 48.

Myles Aldridge caught a pass for 14 yards then Schrader caught one for 9 as the Hornets drove to the 16. But, instead of cashing in to make it 21-0, Daniel made his interception and return.

Hornets head coach Buck James had talked about his team’s poor practice on Tuesday during the week. After Friday’s game, he blamed what he called his team’s sluggish start to that.

“I say our sluggish start had a lot to do with Tuesday practice,” he stated. And I alluded to that at halftime to the kids. I said, ‘You know, Tuesday, I feel like, is our first half and Wednesday’s our second half then we polish on Thursday. But we’ve got to have good days of practice on Tuesdays and Wednesdays.”

Halftime wasn’t the only time the coach brought it up either.

“I talked to them on Tuesday, on Wednesday and I turned around and talked about it before the game,” he related. “I beat that horse to death. Trying to get them to understand that preparation is everything.

The message appeared to sink in.

After the Bryant defense made its stand once the Rockets got within 22 yards of tying the game, the Hornets’ offense went to work. Schrader caught a Ledbetter pass for 23 yards. Adams ran for 14 and, a play later, blasted for 30 yards and another score.

The Rockets went three-and-out and Bryant had the ball back at its own 37 with 6:07 left in the half. Meaders caught a pass for 27 yards and, a play later, Anderson slashed his way to paydirt from 29 yards out.

Undermined by a fumble, Catholic, once again, failed to move the ball. Daniels went back to punt, but the rush was too great. He tucked it and ran only to be hauled down well short of a first down by Rodricho Martin.

Passes of 11 yards to Meaders and 19 yards to Schrader, set up Adams’ second 30-yard touchdown run, a tackle-breaking jaunt that made it 35-7.

Bailey had another sack and the Hornets used their timeouts to get another shot to score. Daniel punted on a fourth-and-18 from his 29.

The Hornets covered 44 yards in five plays in less than a minute. Schrader caught the 28-yard TD strike from Ledbetter with 1:42 left in the half.

The Hornets had their 35-point lead at the half to invoke the mercy rule.

A lot of kids got into the game in the second half. Behind the running of Anderson behind Bryant’s second line, the Hornets took advantage of a long kickoff return by Aldridge and reached the Rockets’ 5.

The Catholic defense held them out of the end zone at that point but when the Rockets were unable to pick up a first and had to punt from their own 6, the Hornets took advantage of a short field to increase the margin. Foote started the drive with a 10-yard burst. Meaders hit Clay Curtis and River Gregory with passes, setting up Jones’ 3-yard touchdown plunge.

Senior Hunter Stallman recovered a fumble on a third-down play for the Rockets on the next possession. Foote broke a 20-yard touchdown run and, with 7:07 left in the game, the final was on the board.

The Hornets, ranked in the top 25 nationally by MaxPreps, will play next at Little Rock Central. The rejuvenated Tigers improved to 4-1 this season by rallying to win at Fort Smith Northside 42-35 on Friday night.