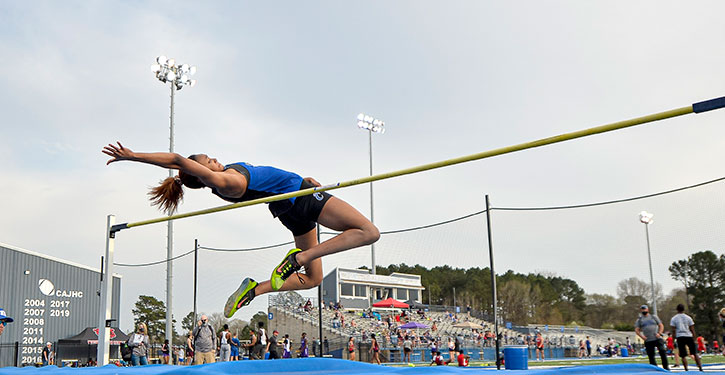 For more photos of this event by Jimmy Jones/Jones Sports Media, go here

Lauren Lain, fresh from basketball, won both hurdles races and the Bryant Lady Hornets earned victories in three of the four relays as they captured the team title at the annual Bryant Hornet Relays at Hornets Stadium on Tuesday night.

Amya Smith also picked up a first-place finish to make it six in all for the Lady Hornets, who compiled 173 points.

Bryant girls were second in six events including the 4 x 800 in which Caitlyn Phillips, Maddie Nelson, Paige Spicer and Margo Gilliland turned in a time of 11:10.96. Cabot won in 11:02.85.

Smith took second in the 100-meter dash with a time of 12.65. Kamaria Russell of Little Rock Christian edged Smith at 12.44.

Madelyn Thomas accounted for the sixth second-place finish when she cleared 9’6” in the pole vault. Only Benton’s Payton Fleeman did better at 10’6”). Bryant’s Jessica Rolen was third at 8’6”.

In other field events, Chasity Jackson’s high jump of 5’1” was good for third. Bradford cleared 4’10” to place fourth.

Spikes and Scott-Smith added points in the 200 while Maddie Nelson and Gillaland scored in the 800. Spikes finished fifth in 27.50 with Scott-Smith sixth in 28.07. Nelson finished in 2:47.82 to place sixth with Gilliland turning in a 2:48.55 to take seventh.

The next competition for the Lady Hornets is scheduled to be Thursday, April 1, at the Little Rock Central/Southwest Relays at Scott Field.