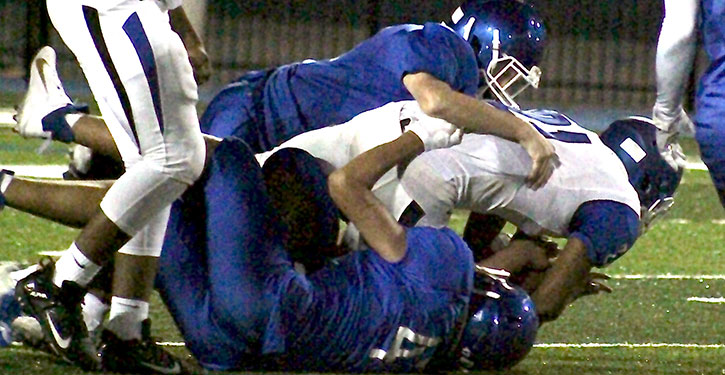 For the first time all season, the Bryant Hornets freshman team found themselves trailing. The Conway Blue Wampus Cats freshmen took the opening kickoff and, thanks to a pair of big plays, drove 66 yards in 10 plays to take a 7-0 lead.

It was the first time, in fact, that anybody had scored on the Hornets since the first quarter of their first game in Warren on Sept. 3, a string of 15 quarters.

So, how did the unbeaten Hornets respond? By halftime, they led 42-7 and, for the third time in five games this season, the mercy rule (running clock) was in effect at the start of the third quarter. All five of Bryant’s games have ended with the mercy rule in effect.

This time, the Hornets’ reserves added a score in the second half to make the final score 48-7.

The Bryant freshmen have now outscored its five opponents 189-13 with only 20 of those 189 scoring in the second half.

Gideon Motes passed for three scores, James Martin ran in a pair and Jayden Ashford had a touchdown run behind the blocking of, first, tackles Tate Settle and Rafe Wallace, guards Cole Rye and Brendon Bates and center Matthew Elder; then, in the second half, Ben Wolverton, Jackson Lammey, Conley Billingsley, Rye and Jonathan Resendiz.

Plus, the Hornets scored on defense and on special teams.

The Hornets started the game in dominating fashion. On first down, Nick Biskey broke down a running play for a loss of 6. On second down, linebacker Hank Penfield sacked quarterback Donovyn Omolo for a loss of 13.

As a result, Conway Blue faced a third-and-29 at its own 15. But the Cats converted with a 46-yard pass from Omolo to Jackson Anderson. Running back Crissten Oneal broke a 17-yard run but, again, the Hornets looked like they’d stopped the drive when Biskey tackled Keenan Jeffers for a loss, setting up a third-and-20.

But Omolo converted again with a 32-yard pass to Oneal. From the 10, two Omolo passes fell incomplete. On a third try, Omolo pulled the ball down and ran around the left side, beating the defense to the corner for the touchdown.

Bryant answered with 28 points in the final 5:06 of the opening quarter.

The first score was set up by a 40-yard keeper by Motes. Martin carried 12 yards to the 6 then scored from there. Jaime Perez evened the game with the extra point.

On the first play of Conway Blue’s next series, Omolo kept for 17 yards but the collision at the end of it with Chelton Murdock shook both up. Murdock returned to the game later but Omolo was done for the night.

Penfield made a tackle for a loss to the 25. After an incomplete pass and a false start penalty, the Cats faced a third-and-18 at its own 20. A bad snap got past quarterback Jordan Buggs and as the ball rolled into the end zone, Bryant’s defensive end T.J. Lindsey was there to cover it for a touchdown.

A short kickoff came down to Buggs, one of the up backs. But he was drilled instantly by Martin, coughing up the ball. Nick Gibbs recovered for Bryant at the 36. Moments later, Motes and Cason Trickey hooked up for a 41-yard touchdown pass. Martin ran in the two-point conversion and it was 21-7.

On the next kickoff, Perez again sky-kicked it. This time, none of the Conway Blue players got a hand on the ball before the speedy Martin covered it and Bryant had the ball back 34 yards away from more points.

Despite a pair of penalties, the Hornets got there. On a third-and-14 at the 27, Martin skirted the left side and went the distance for the touchdown on the last play of the quarter. Perez kicked it to 28-7.

Using the Wildcat offense some, the Wampus Cats picked up a first down on a 20-yard run by Oneal. But they wound up with a fourth-and-7 at their own 37. Buggs tried to throw for a first down only to have Mytorian Singleton intercept at the 16.

Martin opened the ensuing drive with a 20-yard bolt. Moments later, Motes hit Trickey for 10 yards to convert a third down. Jaden Ashford picked up 11 then Motes passed to Singleton for 25 yards to the 13. On the next snap, Motes threw to Drake Fowler in the end zone and, with Perez’ kick, it was 35-7.

Conway Blue picked up a first down but then suffered three consecutive lost-yardage plays. They had to punt. Singleton fielded the punt at the Bryant 37 and returned it 19 yards to the Cats’ 44.

Motes threw to Aiden Hughes for 11 yards, hit Trickey for 5, then found Fowler again for the touchdown on the last play of the half to make it 42-7.

And the Hornets got the ball to start the second half. Starting at their own 36, they marched to paydirt in eight plays, all on the ground behind that second line. Ashford and Murdock ate up the yardage. Ashford had a 14-yard tote and Murdock’s including a 12-yard burst. Ashford wound up scoring from 5 yards out.

Though the extra-point attempt was blocked, the Hornets led 48-7.

With tackles for losses by A.J. Foreman and Gavin Lewis, the Cats were forced to punt. Bryant’s third team offense went three-and-out but, in the end, Conway Blue turned it over for the fifth time all night as Aaron Granado picked off a pass.

Along with being 5-0 overall, the Hornets improved to 4-0 in the Central Arkansas Junior High Conference, tied with Cabot South first first place. Bryant hosts Little Rock Catholic next Thursday. The Hornets are scheduled to play at Cabot South on Oct. 22.