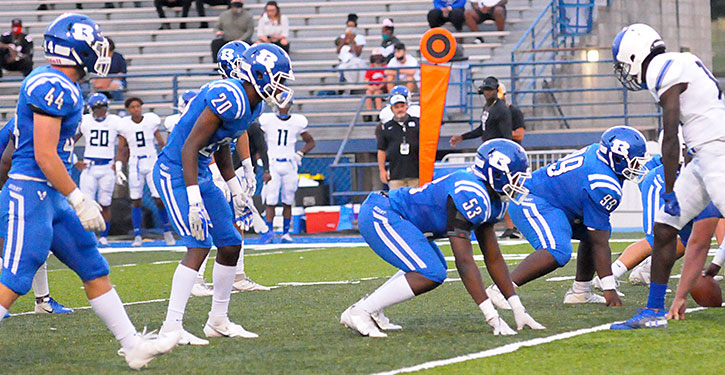 “We can’t take anything for granted,” declared Bryant Hornets head coach Buck James. “I think if you are satisfied where you’re at, you’re not going to go any higher. And I think our team and our coaches have understood that we’ve got to be better prepared and we’ve got to have more attention to detail. Everybody has to be on the same page at the same time, doing the same thing. I think we’ve gotten by some in the last couple of weeks by just being in the right place at the right time and doing the right thing at the right time instead of doing it play after play, series after series.”

When you’re two-time defending Class 7A champion and 4-0 during the current season with three of those wins by mercy-rule margins and the fourth victory over a renowned team from Texas — well, you’ve got to find your motivation for continued hard work by stretching your own limitations. There are many games to play yet and it’s no time to be getting a big head, even though that would be somewhat understandable for a team that’s won 21 games in a row.

In fact, there were some who felt that the Hornets would’ve been better off, in the long run, if they’d lost to Trinity Christian from Cedar Hill, Texas, instead of rallying for a 44-40 win. It would, they said, humble them a little bit and keep them working hard.

Of course, working hard is a matter of survival sometimes for the Hornets, thanks to James and his demanding coaching staff. They just don’t have letdowns — witness last week’s 48-7 romp over Fort Smith Northside on the heels of the emotional win over Trinity — and they just don’t let up on the work.

“We felt like we played well,” James acknowledged, “and we did some things right, but you know we keep having little bitty mistakes.

“We make plays and we’re tackling people but when we play people that are as good as we are or better, we feel like that’s going to be an Achilles heel for us if we keep doing those things over and over and over,” the coach added. “We made a lot of plays last week, if we don’t make a play, that guy goes for touchdown or many yards. We’ve got to fix that.

“And the same thing with their offensive linemen,” he continued. “We’re winning the line of scrimmage but we’re not moving the line of scrimmage. So, this has been a big emphasis for us this week especially in our practices, just fitting in the right place, being at the right place and doing your job through a 3-to-7-yard radius. I think if we don’t pay attention to that sooner or later down the road it’s going to get us.

“I’ll tell you what I think we do well. I think we do a really good job of pursuing the football. I’m really proud of the way our defense runs to the ball. And I think that’s saved our bacon a lot too.

“But I don’t think we’ve been very good technicians. I don’t want them to over-think it, I just want them to react to what their seeing faster. And that’s what our defensive coaches are wanting us to do. It’s squeezing down blocks, it’s filling gaps, it’s a railing the receivers, it’s jumping routes. I think it’s the things that you see over and over and over and you play it the same way every time. Those are things defensively we’ve got to fix.

The theme of consistency brought the coach to the offense too.

“I think we’ve got to get up to linebacker depth,” he said regarding the offensive line. “When we get downfield and we have big guys against little guys, we’ve had big plays. Then on certain plays, where we don’t have big plays because we don’t have big guys getting to the little guys. The big guys blocking the big guys is not what’s going to make you an explosive, high-scoring offense. It’s going to be when you get those guys driven into the little guys. I think we’ve got to be better at that.

“And that’s what we really concentrated on this week, fine tuning the details really in the box,” James emphasized. “And catching the football and running the correct route and running and trusting the route and not trying to get open. Let the rest of it take care of itself. Those are things that we really emphasize this weekend. Hopefully we take a step forward for it and that we are a better football team and we are better coached football team and we are better executioners of what we’re trying to do.”

The Hornets head back to War Memorial Stadium tonight to play the Little Rock Catholic Rockets.

“Catholic is dangerous,” James said. “Catholic’s got enough speed to cause problems. The only thing, they’re not just really athletic. They’re not big and athletic. But speed wise, they match up very well with us. They’ve got four or five guys that can run as fast or faster than anybody we’ve got. They’re just not big guys.

“So, they pose a problem for every team they play,” said the coach. “They were down about three or four touchdowns the other night against Cabot (31-7) and came back and made it a seven-point game and then had a touchdown called back. They’re a team that can do some things to cause problems for any team in this league. If you remember last year, they went to North Little Rock and won. They have the capability of that. They can beat anybody or play with anybody on any given night. You can’t look at the record. You can’t look and see their stat line or anything like that. They’re going to play hard. They’re going to be well coached and they’re going to do their jobs throughout the whole football game. So, they make you play assignment football.”