Another comeback, another extra-inning win for Hornets 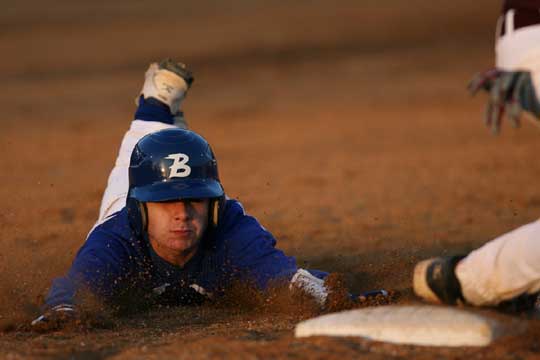 It’s not something you want to have to depend on every game, but it’s nice to know you can do it.

For the second game in a row, the Bryant Hornets fell behind early, rallied to tie then won in extra innings as they edged the Lake Hamilton Wolves, 5-4. Jordan Taylor laced a liner through the drawn-in infield to drive in the game-winning run in the bottom of the eighth Friday night.

The win came on the heels of a nine-inning victory at Watson Chapel earlier in the week.[more] 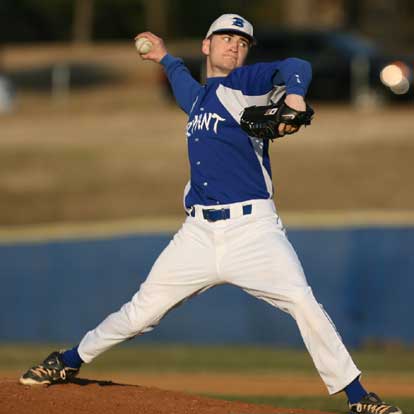 Taylor also picked up the win on the mound for the Hornets with 3 1/3 innings of shutout relief on the heels of Caleb Milam’s start. Milam allowed all four Lake Hamilton runs but all but one were unearned.

Taylor retired 10 of the 11 batters he faced. The lone baserunner came by virtue of his only walk with one out in the top of the seventh. It became a tense situation when a wild pitch and an errant pickoff throw allowed Christian Anglin, in as a courtesy runner for catcher Tyler Vaught, to reach third with one out.

Tanner Neighbors, who was 2 for 3 in the game to that point, came up and hit a high fly down to right-field line that Caleb Garrett, shaded to center, sprinted over to catch, holding Anglin at third. Carter Greathouse, who was 2-for-2 with a walk at that point, smacked a fly to right-center that Garrett Bock ran down to end the inning.

The Hornets went down in order in the bottom of the seventh with Lake Hamilton second baseman Randy Young robbing Chris Joiner of a hit. Likewise, the Wolves were retired in order in the top of the eight with Taylor snagging a liner back to the mound and shortstop Lucas Castleberry spearing a sinking liner at him to retire the side.

Hunter Mayall started Bryant’s eight with a shot over the head of Lake Hamilton center fielder Tyler Bradshaw that one-hopped the fence at the deepest part of the park. Freshman Hayden Daniel came on to pinch-run. When Brennan Bullock rifled a shot through the left side, Daniel was held at third with no one out. But Bullock was thrown out at second, appearing to be surprised that Daniel was still at third.

Taylor came up next and fought Lake Hamilton reliever Chris Oldner to a full count. He fouled off two tough pitches then shot the game-winner past the shortstop.

Mayall had three hits in the game, Bullock two to lead the Hornets.

Milam eased through a 1-2-3 top of the first and his teammates staked him to a 1-0 lead in the bottom of the inning. With one out, Bock cracked a single to center and, hustling all the way, sprinted to second when the ball was bobbled in the outfield.

Mayall chased him home with the first of his two doubles, though he was thrown out at third after the late relay to third.

The Wolves tied it in the top of the second. Neighbors singled to left and Greathouse drew a walk. Milam got Dre Bennett to bounce into a force at second but Neighbors moved to third on the play then scored on a sacrifice fly by Young.

Jon Rucker, the Lake Hamilton starter, retired the side in order in the bottom of the inning and his teammates gave him a lead in the top of the third, scoring three unearned runs. 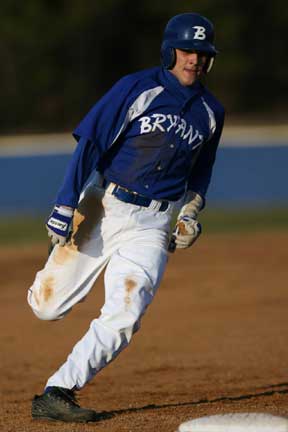 Trent Curry opened the inning with a single. Milam got J.M. Lipton to bounce back to the mound but his throw to second was off target and both runners were safe. Levi Runyan tried to bunt the runners over but Milam got off the mound well, fielded the ball and fired to third for a force. A single by Vaught, however, loaded the bases. Milam uncorked a wild pitch and Lipton scored to make it 2-1.

The junior right-hander got Neighbors to bounce back to the mound and the runners had to hold. He then got within a strike of getting out of the inning but Greathouse cracked a 2-2 delivery into the gap in left-center for a two-run double that made it 4-1.

The Hornets got two of those runs back in the bottom of the frame. B.J. Ellis legged out a double and Joiner walked. A wild pitch by Rucker allowed Daniel, running for Ellis to take third and when Faught’s throw from behind the plate was wild, he scored.

Joiner, who held at second, was still there with two down when Bullock lofted a deep fly to center that Lipton dropped. Joiner scored and Bullock wound up at second. Taylor then made a bid to drive in the tying run but was robbed by Curry at first to end the inning.

Young led off the Wolves’ fourth with a single but Ellis threw him out trying to steal. Milam fanned Will Harris then hit Curry but Bradshaw, batting for Lipton, drilled a sinking liner to center that Bock came in and went to his knees to catch, ending the inning.

Rucker fanned two on his way to retiring the side in order in the bottom of the fourth.

Milam, in turn, set down the first two in the top of the fifth before Neighbors and Greathouse singled and Oldner walked.

His pitch count over 80, assistant coach Frank Fisher called on Taylor who got Young to fly to center to get out of the bases-loaded jam. 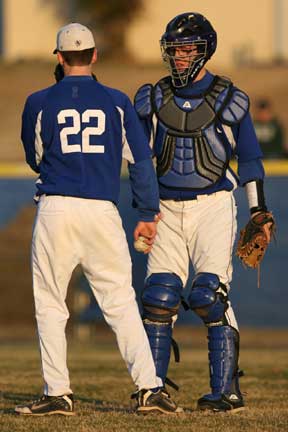 Fisher was acting manager after head coach Kirk Bock had to leave just prior to the game to tend to his mother, who had come to the game. She was suffering from some intense eye pain and the coach rushed her to the hospital. Fortunately, she gained some relief thanks to Optometrist Dr. Russell Simmons and was able to return with Coach Bock before the end of the game.

The Hornets tied the game in the home fifth, chasing Rucker. With one out, Joiner was robbed of a hit on a nice play in the hole by Runyan, the Wolves’ shortstop. Garrett Bock, however, kept the inning alive by drawing a walk. Mayall followed with a shot that Young knocked down with a dive at second. And when Young’s throw was errant, Bock raced to third and Mayall took second. Bullock came up and worked the count to 3-2 before lining a single to left to bring Bock home with the tying tally.

Oldner came in with runners at the corners and got out of the inning by inducing a comebacker off Taylor’s bat.

The Hornets made a bid to get another uprising going in the sixth when Brady Butler blasted the first pitch to deep center. But, trying to turn the double into a triple, he was thrown out at third as Lake Hamilton executed their relay to perfection.

Oldner set down the next two to end the inning then worked a 1-2-3 seventh before giving up the winning run in the eighth.

Now 3-0, the Hornets were set to play Texarkana on Saturday at 1 p.m. The game was originally scheduled to be played at Texarkana but the game has been moved to Bryant because of a wet field at Arkansas High.

In a JV game Friday night, the Hornets prevailed 5-0 behind the shutout pitching of Jimi Easterling and Matt Neal. Coach Bock said that Landon Pickett and Cameron Price swung the bat well in the game.

Easterling struck out two after giving up a lead-off hit in the first inning. In the bottom of the inning, the Hornets scored the maximum of three runs when Hayden Daniel reached on an error, Evan Jobe walked and Pickett smacked a drive to the fence for an RBI single. Caleb Milam walked to load the bases and, with two out, Josh Pultro singled to drive in two.

Easterling pitched around an error in the top of the second, recording his third strikeout.

The Hornets scored their other two runs in the bottom of the frame. Price singled, Dylan Corss was hit by a pitch and, after a groundout moved them to second and third, Daniel singled to right-center to chase home Price. Cross came home moments later on a sacrifice fly by Pickett.

Easterling struck out the side in the top of the third then Neal came on in the fourth. After a strikeout, an error, a hit and a walk loaded the bases. But Neal picked the runner off first then got out of the inning with his second strikeout.

Daniel singled in the bottom of the inning but was stranded.

In the fifth, Neal struck out the lead-off batter but then walked a pair around a bloop single to load the bags again. Neal again picked the runner off first and, after a rundown, the runner at third broke for home and the Hornets gunned him down at the plate to end the game.

One out when winning run scored.