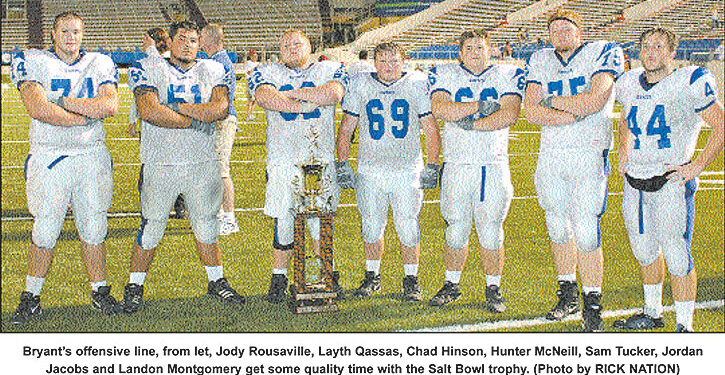 LITTLE ROCK — And the trophy comes back home to Bryant.

Perhaps in the tumultuous days leading up to the 2007 Salt Bowl, the story of the 1978 Orange Bowl was told to the Benton Panthers — and maybe the Bryant Hornets too. Once upon a time, way back before they were born, there was this great team from Oklahoma with the Heisman Trophy winner and the Outland Trophy winner and lots and lots of talent. And there was this upstart team from Arkansas that started out as an underdog when the two teams were matched in the Orange Bowl but became even more so after Arkansas head coach Lou Holtz — you know, the old, skinny guy with the slight lisp that does college football analysis on TV (yes, he was a coach!) — suspended three starters . . . well, folks were expecting a laugher.

As it turned out, Holtz and Arkansas had the last laugh as quarterback Ron Calcagni and a back-up running back named Roland Sales had the games of their lives and the mighty Sooners were thumped.

You see, like those Razorbacks, the Panthers came into the game with a few players, including starters, unavailable because of a suspension, stemming from a well-attended, loud, unchaperoned party that wound up involving alcohol and the police and investigations.

But, unlike those Sooners, the Hornets, while confident and talented and heavily favored, were starting out their season and had something to prove not only to observers but to themselves.

And then there was that trophy — the Salt Bowl trophy, which in eight years of existence, has now gone home to Bryant seven times.

After a fitful start, the Hornets rolled to touchdowns on three consecutive possessions in the second quarter then a fourth to start the second half on their way to a 25-7 victory.

The Hornets did it with stifling defense (for most of the game) led by its tough trio of linebackers Jared Szabad, Ethan Passmore and Regions Bank defensive player of the game Austin Humbard, along with a balanced offense sparked by junior running back Aspen Trevino who rushed 17 times for 102 yards and three touchdowns, Regions Bank offensive player of the game quarterback Logan Parker (18 of 30 for 184 yards and a TD) and an offensive line that didn’t allow a sack against the unpredictable blitzes employed by the Panthers.

The Bryant defense, on the other hand, dropped Benton backs for losses on 12 plays in the game. The result was a net rushing of just 1 yard. The Panthers’ tough senior quarterback Zac McCauley was the leading rusher with 5 yards on 22 carries.

So, for the Hornets, there was plenty to be encouraged by but enough to work on.

“We did a lot of good things and we made a lot of first-game mistakes,” acknowledged Hornets head coach Paul Calley. “Defensively, I thought we played really well early on. We did a good job of pressuring the passer.

“Offensively, we didn’t start clicking until the second quarter. We looked really good in the second quarter and did a good job of pass protecting. We talked at halftime that we wanted to come out and finish it off and we had a great drive to start the third quarter. Aspen made some good runs, Dylan (Chism) made some good runs and Logan did a good job recognizing things that we had worked on. Benton started controlling the ball after that and kept the ball away from us.

“We missed some tackles in the second half and a lot of that’s due to the fact that we haven’t tackled live a lot (in practice) trying to keep people healthy,” he noted. “Then, once we got a little tired, we didn’t tackle as well.”

At first glance, nine penalties for 79 yards (including four for 30 in the first quarter which contributed to the sputtering start) might be alarming but not so much to the coach.

“Some of them were penalties and some of them weren’t,” he allowed. In regard to a couple of personal foul flags, Calley added, “(They said) we were being over aggressive. The whistle hadn’t blown and we’re still blocking down the field. They threw a couple of them and said it was too far behind the play to be blocking. But I tell our guys to block until the whistle blows regardless of where they’re at, keep playing.”

The Hornets started their first touchdown drive with 1:52 left in the opening quarter, their third possession of the game. In 10 plays — and without a penalty — they marched 68 yards to paydirt. Parker completed 4 of 6 passes along the way including a nice connection with Jake Jackson for 17 yards early in the drive. Chism pounded for 3 yards to convert the lone third-down situation, getting the ball to the Benton 29. After Parker hit Jackson for 12 to the 17, Trevino laced his way through the Panthers defense for his first TD.

The Benton defense continued to be stymied — the Panthers didn’t manage a first down until the final 1:30 of the half — and the Hornets got the ball back at their own 30. It took 10 plays again with Parker completing all four of his passes including a 15-yarder to Taylor Masters to convert a third-and-11 situation. The rest was taken care of by that offensive line and the downhill running of Chism and the slice-and-dice by Trevino. After Chism crashed to the 5 with an 8-yard tote, Trevino took it in off tackle to make it 12-0.

Moments later, the Hornets were at it again thanks to an interception by safety Dijon Benton with 2:24 left in the half. Parker completed 5-of-6 to take the team down the field. Aided by a late hit out of bounds by Benton, the Hornets reached the 20 where Parker found Masters on a post route with a perfect pass and the touchdown with 1:46 to go.

Masters wound up with nine catches for 84 yards in the game, topped only by Benton’s Colby Roberts who pulled down 11 of McCauley’s passes for 102 yards, after only catching two balls for 9 yards in the first half.

Benton put together its best drive to that point at the end of the half, reaching the Bryant 27. A last-second field-goal attempt of 45 yards was well short and Bryant led 18-0 at the half.

To start the second half, the Hornets drove 79 yards, again in 10 plays, for a clinching score. All of the yardage came on the ground except for a 30-yard completion from Parker to Jackson that got Bryant into Benton territory at the 36. Moments later, Parker sneaked for a first down to convert a fourth-and-1 from the Benton 27. Trevino slashed for 12, Chism bashed for 5 and Trevino capped the drive with a 7-yard touchdown run.

Austin Bradley’s extra point made it 25-7.

Benton answered with a solid drive from its own 17 to the Bryant 25 but, on first down there, McCauley tried to sweep left end and Bryant’s Nathan Probst blew up the play, fighting through a blocker to bring McCauley down for a loss and knocking the ball loose. Benton recovered the football but couldn’t recover from the 12-yard loss.

The Panthers quarterback was dropped for losses on the next two plays as well and the Panthers wound up punting it away from midfield.

Benton’s next possession went from its own 7 to the Bryant 11 where it stalled and, when a fourth-down pass came up short, Bryant took over.

Moments later, however, an interception by Kaleb Prothro got the ball back for the Panthers at the Bryant 20. Five plays later, McCauley sprinted around right end and just got into the corner of the end zone for a touchdown, setting the final score with 3:31 to play.

This Friday, the Panthers will return to War Memorial Stadium to take on Bryant’s 7A-Central Conference rival, Little Rock Catholic. The Hornets will play their home opener against Benton’s 6A-South rival, El Dorado.