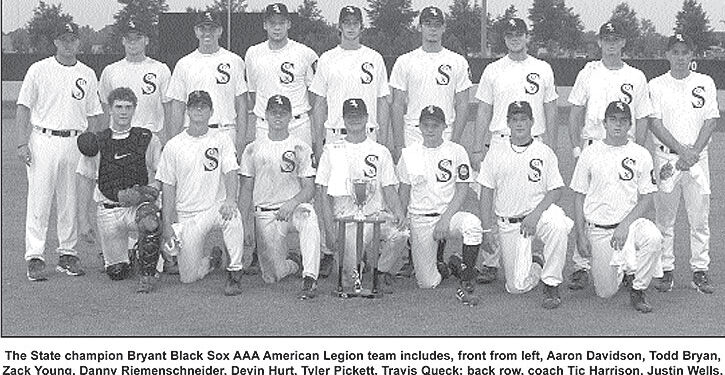 JONESBORO — For Craig and Tic Harrison, it couldn’t have come at a better place.

For Todd Bryan, it couldn’t have come on a better day.

For Justin Wells, it couldn’t have come a better way.

And, for the Bryant Black Sox altogether, it couldn’t have been much sweeter.

On Saturday, Aug. 6, at Tomlinson Stadium on the campus of Arkansas State University, the Bryant Black Sox captured the AAA American Legion State championship with a 7-4 win over Fort Smith Kerwins one year to the day after they had lost twice to Kerwins to fall a win short of a title.

“We had a goal this year, a mission,” stated an emotional Craig Harrison who along with his brother Tic have coached the Sox since 1995. “There was a lot of pent-up frustration in that dugout. The guys showed a lot of heart. We didn’t start the year very good. We were 10-5 but we’ve only lost one ballgame since then at Pine Bluff after the trip to St. Louis.”

A couple of those other losses were suffered at the hands of teams the Sox may see in the Mid-South Regional Tournament at Taylor Field in Pine Bluff. They were set to open against the Missouri state champion from Festus at 4:30 p.m., on Thursday, Aug. 11.

The state title is the first for Bryant since ’95. Leading their first team to a State title (and a third-place finish at Regionals), the Harrisons no doubt figured they might have a few more State titles by their 10th season. The fact that it has eluded them, coupled with the team’s frustrations not only in the 2004 Legion final but in high school the last two seasons, made it an emotional scene. Plus, getting the win at ASU meant a lot to the coaches, both former baseball lettermen for the Indians.

“I told Tic, in 2015, we better make sure we’re coaching,” Craig Harrison quipped. “It just means so much. It’s such a weight off our shoulders. We got the label the last two years of not being able to win the big game. Now we can put that to rest.”

Something that also made it special was the fact that the Bryant team was made up entirely of Bryant kids while Fort Smith, like many other Legion teams, featured players from throughout their region. Like last year, Kerwins’ roster included just three players that were actually from Fort Smith.

For Bryan, it was a great way to celebrate his 19th birthday.

“It was one of the better presents I’ve gotten,” he declared.

Bryan, who was the winning pitcher in the game, was hampered all season by a variety of ailments that limited his time on the mound. But, in the end, he not only started the championship game and won it with relief help from Casey Grisham and Wells, he was the starter and winner in Bryant’s State opener and, before that, in the District Tournament win over Pine Bluff that clinched the trip to State.

“It means a lot because we’ve been let down a couple of times in the championship the past couple of years, so it’s pretty big to take it home,” Bryan said of the championship. “I just wanted to make sure I threw strikes. I was going to count on my defense making plays. I wanted to let (Kerwins) hit the ball. I just tried to throw fastballs most of the time for strikes then break it in on them later in the game.”

“Todd pitched his guts out,” Harrison stated. “Our game plan was to get six innings with the lead then go to Justin. Casey didn’t want to come out but that was our game plan. Justin has wanted this as much as anyone, if not more. I told him, ‘It’s all yours.’”

With Bryant leading 7-3, Grisham relieved Bryan in the sixth after a double and a single had runners at the corners without an out. He gave up an RBI single but got out of it after that thanks to a fine defensive play by Danny Riemenschneider at second.

But when Grisham hit Tyler Tate to lead off the seventh, Wells was brought on. In the spring, the right-hander was on the mound when Sylvan Hills rallied to beat the Bryant High School team in the State semifinals. The Hornets were one out away from a return trip to the Class AAAAA State championship, which they had lost the year before.

This time, Wells shut the door and picked up his third save in Bryant’s third consecutive win, a large factor in his garnering the tournament’s Most Valuable Player award. His effort was aided by two nifty doubleplays turned by second sacker Devin Hurt and Riemenschneider, who moved to short when Wells took the mound. The first got the Sox out of the seventh, the second erased a lead-off single in the eighth.

Bryant turned three doubleplays in the game and seven in the four games of the tournament.

In the ninth, Wells struck out the side around a one-out error, starting the celebration.

The game went according to play for Bryant, which jumped out to a 5-1 lead in the first three and a half innings.

“We wanted to get the lead,” Harrison said. “We had their signs early then they mixed them up. But we took advantage. We had some good cuts, we swung the bats good and we got the lead like we wanted.”

Bryan opened the game with a double past first. Riemenschneider got a bunt down that he beat out for a hit then Aaron Davidson bounced a single up the middle to make it 1-0.

After Bryan retired Kerwins 1-2-3 in the bottom of the inning, the Sox added two more runs. Cory Lambert was hit by a pitch and Richie Wood walked. Another balk put runners at second and third for Travis Queck who legged out an infield hit to drive in a run. Wood then scored when Bryan grounded into a force at second and hustled down the line to beat the relay to first and a would-be inning-ending doubleplay.

Kerwins got on the board with a single, a double and a groundout in the bottom of the inning and it stayed 4-1 until Bryant’s fourth. The Sox manufactured a run in classic style. The swift Wood walked to open the inning and, with Queck faking a bunt, he swiped second. Queck grounded up the middle to short and Wood hustled to third. He scored moments later on a sacrifice fly by Bryan.

Kerwins, which got its lead-off batter on base in six of its nine at-bats, added a run on a double, an error and a groundout in the bottom of the fourth but Bryan forced them to strand a runner at third.

Thompson issued a walk to Zack Young to lead off the fifth. The patient third sacker has waited out a whopping 35 walks this season to lead the team. It spelled the end of the day for Thompson. Chris Bullington, who helped Kerwins beat the Sox in 2005, relieved and hit Daniel Price with his first pitch. Wells sacrificed the runners to second and third then Lambert, on an 0-1 pitch, and Young executed the squeeze bunt perfectly to make it 6-2.

And when Wood beat out an infield hit, Price scored to make it 7-2.

Phillip Milam singled and Clay Crowley doubled to open the bottom of the fifth for Kerwins. Tyler Tate drove in a run with a sacrifice fly but Crowley never got off second as Bryan struck out the next two to get out of the inning.

Jantzen Black doubled and Wade Pressley, who had three hits, singled to open the sixth, however, and Bryan gave way to Grisham, who retired the next batter Garrett Groom thanks to a splendid play by Davidson, the Bryant catcher, who sprinted to the edge of the third-base dugout to catch a foul pop up against the fence.

Michael Jones singled in a run with a blooper to right but Grisham got the next two to get out of the inning.