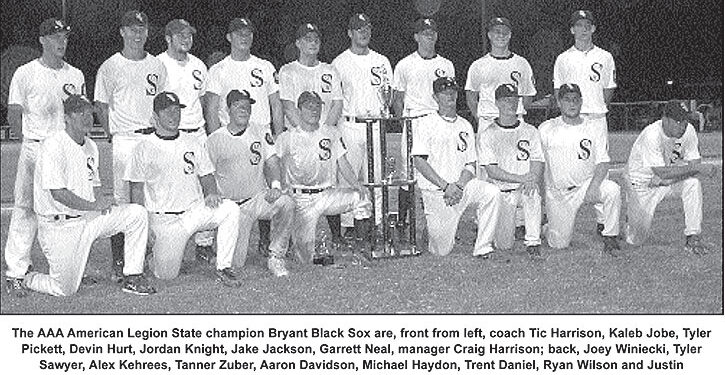 MOUNTAIN HOME — To be called a horse as a baseball player is, believe it or not, a compliment. If you’re a horse, you are durable, determined, strong, you don’t wilt under pressure and, if need be, you put your team on your back and carry them.

Aaron Davidson is a horse.

He was, in fact, a thoroughbred as he came down the back stretch of the Bryant Black Sox’ 6-3 win over the Fayetteville Lindsey & Associates Dodgers in the second round of the AAA State American Legion Tournament. Though his pitch count was winding its way toward 150, he struck out the last seven batters he faced and eight of the last nine. His fastest fastball, clocked at 91 miles per hour, came in the last two innings. His sharpest curve fell off the proverbial table in the final frame.

And he was a Clydesdale as he battled through leg cramps three days later and pitched another nine innings, another 150 pitches or so, as the Sox beat Fayetteville a second time, 4-2, to capture the championship.

To put it into perspective, the Dodgers, which entered the tournament as the favorite with an impressive 41-5 record, earned mercy-rule wins (10-run lead after seven innings) in every game it played other than those two in which Davidson pitched against them.

After opening the tournament on Friday, Aug. 3, with an amazing comeback in a 15-14 win over Jonesboro, Bryant advanced with the first win over Fayetteville on Saturday with Davidson striking out a whopping 17 batters, walking just three and scattering 10 hits while he and his Sox teammates knocked Fayetteville ace lefty Chase Huchingson, a major college signee who was chosen in the June Major League draft, in the third inning.

They followed up with a showdown with Zone 4 rival and defending State champion Pine Bluff Simmons First National Bank. Befitting the nature of the rivalry, the two teams battled for 11 innings before Bryant prevailed, 8-7, turning the tables on the Bankers who beat the Sox in the 2006 State final.

That win put the Sox in the championship game. After they ousted Jonesboro, 7-3, on Monday, Aug. 6, to force Fayetteville to beat them twice on Tuesday. The Dodgers, in turn, made it to the winner-take-all finale by adding the Sox to their run-rule list of victims, 20-3, only to run into Davidson again in the title game.

Now 37-8 on the season, Bryant is scheduled to represent the state in the Mid-South Regional in Paducah, Ky., starting with a 9:30 a.m. game against Bossier City, La., on Thursday, Aug. 16.

If only it was in Mountain Home. The State was the third tournament in a row held at Cooper Park that the Sox had won. They won the Twin Lakes Classic in 2006 and again this summer. Even the locals had started calling it Bryant’s home away from home or saying the Sox were the “other” home team.

Davidson pitched in the final game despite leg cramps that had him limping to first.  “My legs are just dead,” he said afterwards.

But he insisted they would’ve had to drag him off the mound to get him out of the game. “Not for the world,” he asserted. “No way. I was going to work hard and give it everything I had. My arm feels great.”

“I told him after the sixth, he was done,” insisted Sox manager Craig Harrison. “He said, ‘No.’ And after the seventh. Then, after the eighth, I said, ‘You’re done,’ and they didn’t even look at me then. But we knew that the eighth really was the inning I was worried about because I thought, if we got to the ninth, that he’d have enough momentum to carry himself through.

“What can you say about a guy that goes out there two games like that?” Harrison added. “Ben (Hickman) was like that. I always compare him to Ben as a guy who says give me the ball and I’m not coming out. But nobody else. We would watch pitch counts and all that but he just was not going to come out of the game unless we lost.”

Hickman was the horse of the team that won the 1995 State title then finished third in the regionals. He now helps coach the Sox pitchers.

Davidson wasn’t as dominant but it was, in some ways, more impressive on Tuesday. He still struck out 12 and only allowed seven hits but he walked seven and the Dodgers had runners on base in every inning. Plus, Huchingson was much tougher, going the distance for his team, fanning 12, walking just three and allowing 10 hits.

The Sox jumped out to a 2-0 lead in the first. Joey Winiecki led off with a walk and stole second. Despite aching legs as well, he would swipe three bags in the game.

Jake Jackson reached on an error then Davidson cracked a bouncer to first that took a bad hop past Taylor Shaddy for an RBI single. A walk to Devin Hurt loaded the bases then Ryan Wilson hit a grounder to Tim Carver at short who tried to get a force at the plate but threw into the dirt as Jackson slid in safely.

A walk and a double allowed Fayetteville to get on the board in the bottom of the inning but Davidson preserved the lead by fanning Huchingson and getting Garrett Meyer to fly to right.

Fayetteville had a chance to tie it or more in the second when Zac Wallace blooped a single with one out and Drew Baker walked. Bryant tried to sneak in behind Baker at first and pick him off but the throw got away from first baseman Tyler Sawyer. Wallace took off for third and rounded the bag as Sawyer scrambled after the ball in foul ground. Wallace sprinted for home but Sawyer fired a strike to catcher Tyler Pickett who applied the tag for the out.

So, it stayed 2-1 until the fourth when Trent Daniel beat out an infield hit with one away then raced to third when Winiecki chopped a single that bounced over Carver’s head. Winiecki took off for second and drew a bad throw allowing Daniel to score Bryant’s third run.

A two-out homer by Baker in the bottom of the inning cut the margin to 3-2. Stelte followed with a single but, after that, Fayetteville managed just two more hits the rest of the game.

Davidson worked around a single and a walk in the fifth, fanning the next two batters including Shaddy who was the offensive MVP of the tournament. He came into the game hitting over .600 but went 0 for 4 with three strikeouts against Davidson.

He walked a batter with one out in the sixth then another with two out in the seventh with no damage. In the eighth, Wallace belted a one-out double but Davidson fanned the next two.

Bryant tacked on a run in the sixth when Pickett beat out an infield hit and got to second on a bad throw to first. Daniel got a bunt down but an aggressive play by Shaddy at first retired Pickett at third. Daniel swiped second, however and, after Winiecki was robbed of a hit on a looping liner to left, Jackson came through on a 3-2 pitch with an RBI single past the diving Baker at second.

In the ninth, Davidson and Hurt singled but were stranded. In the home half, Davidson fanned Carter then walked Colton West. Jake Fuller then fisted a slow roller between the mound and first. Davidson couldn’t get to it but Sawyer made a splendid play on the ball and fired to second to force West. Huchingson followed with a slow roller to Jackson at second and, despite a dive toward the bag at first, Jackson’s throw beat him to the bag and set off the Bryant celebration.

The Dodgers forced the winner-take-all final by blasting the Sox who were subdued on offense against right-hander Grant Cosby.

West hit two homers, went 4 for 5 and drove in three runs. Baker hit a grand slam in the first inning to highlight a six-run outburst, then smacked a three-run double in a six-run fourth.

“We got the field goal,” quipped Harrison. “But then they scored three touchdowns and we just didn’t have the passing attack to come back.”

Hurt was the hitting star for Bryant with an RBI triple in the bottom of the first. He doubled and scored on a hit by Sawyer in the third. The third Bryant run scored in the second when Jordan Knight doubled, advanced on a grounder by Sawyer and scored on a sacrifice fly by Pickett.

“We really weren’t worried,” said Pickett. “As soon as we got far behind we started taking out guys that’d been sore and stuff to give them a little extra rest because we knew we had Aaron on the mound the next game and that was all she wrote.”

Pickett, an unsung hero for the Sox, caught every inning (54) of every game in the tourney often in tremendous heat. He knew before the tourney that that would probably be the case. “I was prepared,” he said after the final. “Well, as prepared as you can get. But I’m absolutely worn out.”