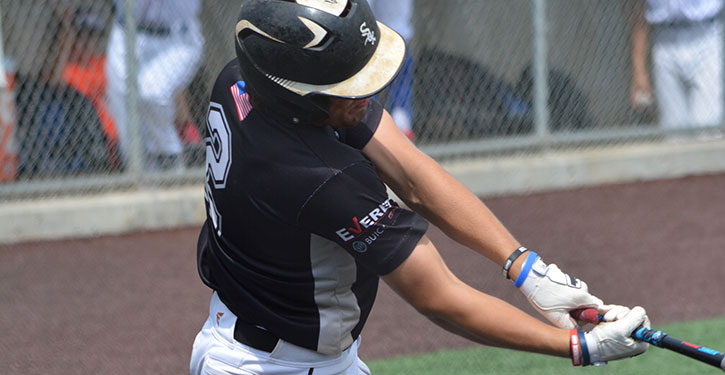 CONWAY — Leading off the bottom of the fourth inning, El Dorado Oilers’ third baseman Jacob Boshears hit a high pop down the left-field line. From left field, Bryant Black Sox outfielder Matthew Sandidge sprinted for the ball; from shortstop, Logan Chambers took off after it; and, from third, Jake Wright headed full tilt that way.

None of them caught it as it fell harmlessly foul but all three of them dove headlong to try to get to it. They all wound up on the ground, more or less on three sides of the ball.

It wasn’t a big moment in the game. Boshears would strike out. But it was a sure indication of what kind of effort, drive and focus that the Sox were playing with on Saturday after a lackluster performance in a 10-1 loss to Fort Smith on Friday.

With that kind of hustle, aggressive base-running, clutch hitting and a stand-up, standout pitching performance from starter Scott Schmidt, Bryant came away with a 9-3 win, earning a chance to play another day as they ended the Oilers’ stay at the 2018 Senior American Legion State Tournament at Warrior Field on the campus of Hendrix College.

The Sox, now 38-9-1, will play another elimination game on Sunday at 1 p.m., against the Russellville Pirates, who followed up their 2-0 upset win over Little Rock Post 1 on Friday with a 12-4 thumping at the hands of Sheridan McCoy-Tygart on Saturday night.

In other action on Saturday, Little Rock bounced back to oust Mountain Home Lockeroom, 12-2; and Fort Smith bounced Paragould Glen Sain GMC out of the winners bracket with a 7-4 win.

On Sunday, after Bryant and Russellville tangle, Little Rock takes on Paragould at 3:15 or so. In the winners bracket final, it’ll be Sheridan and Fort Smith at around 5:30, followed by an elimination game between the survivors of the first two games of the day.

That’ll whittle the field down to three teams going into Monday.

On Saturday, Schmidt shutout El Dorado through 4 2/3 innings before giving way to Peyton Dillon, who finished the fifth and blanked the Oilers in the sixth. Schmidt left after an efficient 45 pitches, making him eligible to return to the mound in two days. Dillon only needed 19 pitches, so he’ll be available on Sunday as well Konnor Clontz, who finished up in the ninth, allowing three runs on three hits.

“We kept him at the pitch-count we wanted,” said Sox manager Darren Hurt regarding Schmidt. “He just did what he does. He goes in there and just throws strikes. He challenges you, throws a little change-up, and if you hit it, you hit it; if you can’t, you don’t.

“That’s what he gives us. That’s why we liked him today. We thought we just needed to really come out and make them beat us with the bat and not put anybody on base. We thought he gave us the best chance to do that.”

Cade Drennan led Bryant’s 10-hit attack with a double, a single, a run batted in and another scored. His knocks included one of the Sox’ clutch two-out hits.

Bryant scored a single run in each of the first five innings, all after two were out, three times on two-out hits.

The Sox met several times as a team before the game.

“There was a lot of talk,” acknowledged Hurt. “We’re just trying to get back in the right — where we were a couple of weeks ago.

“I think they were a lot more focused at the plate today, and selective,” he noted.

“We met a lot as coaches, trying to strategize this thing,” Hurt related. “With pitch countes and everything, it’s going to be tough to do. But we got what we wanted.

Wright set the tone. After El Dorado starter Reece Griffin struck out the first two batters in the game, the count went to 2-2 on Wright who then powered a drive to the gap in left-center that made it to the fence.

Wright wheeled it to third and when the relay-throw from the shortstop got over the head of Boshears at third, he scored.

Leighton Turbeville, the Oilers’ lead-off man who wound up with three of his team’s first fourth hits, opened the home half of the first with a single. He was sacrificed to second but then Schmidt retired the next two.

A one-out walk to Logan Grant set up Bryant’s run in the second. He took second on Sandidge’s roller to first. With Dillon at the plate, Grant took off for third and stole the bag. And, when the catcher’s throw sailed over the third-baseman’s outstretched glove, Grant scored to make it 2-0.

It was the first of three stolen bases for the Black Sox in the first four innings, all of which led to runs.

“In the first inning, when we got ‘pops’ on everybody, we wanted to be ultra-aggressive,” Hurt said, referencing the “pop times” that measure how quickly a catcher or other defender gets a throw away. “We probably weren’t as aggressive as I wanted to be. A couple of times, I wanted us to go, we just didn’t get the jumps. Early on, it got us a couple of runs.”

Bryce Ware singled with one out in the El Dorado second but, on a strike-‘em-out, throw-‘em-out doubleplay, the Sox kept it 2-0. Drennan threw out the would-be base-stealer with room to spare.

In the third, A two-out single to right by Logan Catton started a little uprising. Wright drew a walk on a 3-2 pitch then Drennan came through with his RBI double to make it 3-0.

Schmidt pitched around a two-out double by Turbeville in the bottom of the inning and, in the fourth, the Sox continued to tack on.

Sandidge led off the fourth with a single to center. He stole second but was still there with two outs when Logan Chambers plugged the gap in right center for an RBI double.

After Turbeville’s third-inning double, Schmidt retired six in a row to finish out his moundwork for the day.

The Sox made it 5-0 in the top of the fifth. Again, after the first two had been retired, Myers Buck worked a walk to keep the inning going. He took second on a wild pitch then scored when Grant lined a double into the left-field corner.

After Dillon relieved in the fifth, he worked around a pair of hits in the sixth — a single by Turbeville and and a two-out double to Boshears. Griffin grounded out to Chambers at short and it was still 5-0 going into the seventh.

Drennan led off the final frame with a single to right. Buck walked then Grant got a bunt down for a hit to load the bases for Schmidt. On a 2-2 delivery, Schmidt laced a two-run single to right, making it 7-0.

Noah Davis, in off the bench, executed the squeeze play by getting the bunt down and picking up an RBI.

Coby Greiner sacrificed Schmidt to third. From there, he scored the final run on a wild pitch.

“I tell you I think they’re really focused right now,” Hurt said of his team after the victory. “So, I think they’re set to make a run. Whether we do it or not, we’ll see.”

In order to fight back to repeat as State champions, the Sox will need to win five games in a row over the next three days, two on Sunday, two on Monday and a final contest on Tuesday.