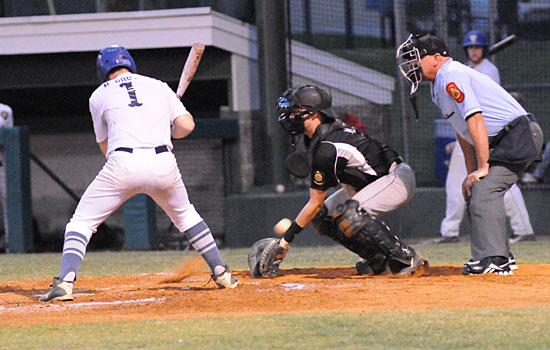 Spurred by Holt and Dale, Sox rally past Jonesboro at Senior State

Dalton Holt hung in, Zach Jackson hung tough, Harrison Dale hung around and Jason Thompson didn’t as the Bryant Black Sox overcame a 6-3 deficit to advance to the winners’ bracket final of the 2014 Senior American Legion State Tournament with a 14-6 win over the Jonesboro Ricemen on Sunday night.

Harrison Dale picked up the win with three scoreless innings of relief. (Photo by Kevin Nagle)

The win improved Bryant to 39-4 this season. They’re set to play Mountain Home Lockeroom, the only other remaining unbeaten team, at around 7 p.m. tonight at Bryant High School Field.

Mountain Home scored five runs in the eighth to snap a 5-5 tie and defeat the Texarkana Red River Federal Credit Union Razorbacks on Sunday. In other action, Cabot Centennial Bank ended the season for Jacksonville Gwatney Chevrolet, 6-2, and North Little Rock’s Colts, just hours after suffering a 12-2 defeat against Bryant, stunned Fort Smith Kerwins, 13-3. Kerwins came into the tournament with a sparkling 29-2 record but wound up two and out.

Today’s action begins at 1 p.m., with an elimination game between Texarkana and North Little Rock. At 4, Cabot Centennial Bank and Jonesboro will battle to avoid ouster.

Dale, who pitched the Sox to victory in the Zone 4 District championship game, was set to have surgery this week to repair some of the cosmetic results of being drilled in the nose with a pitch in a game at the Southwest Illinois Firecracker Classic in Alton, Ill., over Independence Day week. It meant he would miss the State tournament but might be available at the MidSouth Regional if the Sox could get there.

But, with his team trailing 6-3 after four innings, there was the right-hander taking the mound in relief of Jackson. He promptly shut down the offense of the Ricemen, retiring nine of the 11 batters he faced in three scoreless innings. He walked one, struck out three and allowed a lone single.

“Every night I thought about it after I made the decision to have the surgery,” Dale related after the game. “The night before the opening game of State, I thought long and hard about leaving the team out. I like to help out. I like to be a team player. I like to help in any way I can. And it ate at my heart every day. In the end, I decided, ‘You only play once.’ So I decided to cancel the surgery and pitch and play and help my team win.

“He comes in and saves the day,” asserted Sox manager Darren Hurt. “He did what he does. He just came in and got them out.” 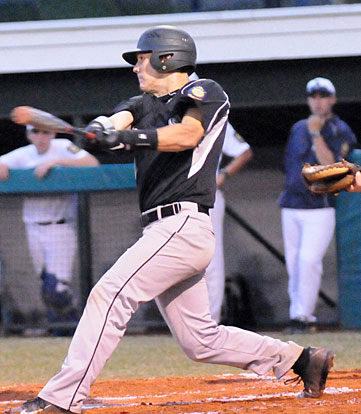 Brandan Warner’s double was one of six extra base hits for Bryant Sunday. (Photo by Kevin Nagle)

“It’s always the best feeling in the world to toe that rubber, to know you’re in control of the game with your teammates behind you,” Dale continued. “In a game like that, they’re cheering, we’re cheering, our fans are cheering, their fans are cheering, coaches going at it — you’ve just got to step up there, man-up, and do the best you can, knowing at the end of the day, you can do anything you set your mind to.”

Holt, meanwhile, came into the game in a slump. He was 1 for his last 18 at bats, 4 for his last 28 and 0 for 2 in the game when he came up in the top of the sixth. The Sox trailed 6-4 but Trey Breeding had just sprinted to second on a throwing error to open the frame. The first pitch from Jonesboro starter Nash Thomas to Holt was a wild pitch allowing Breeding to take third. Holt then turned on an inside fastball and ripped it down the left-field line. Convinced it was fair, Holt was rounding second when he realized the ball had been called foul. Thompson, the Sox’ third-base coach, knowing full well about Holt’s struggles and their toll on him, argued the call with the third base umpire, insisting the ball had landed on the left-field line near the corner. It didn’t take long for him to get the old heave-ho.

But, when play resumed, Holt tied into the 1-1 delivery and plugged the gap in left-center. This time, he didn’t have to stop as he rounded second. He rolled on into third with one of the Sox’ four triples in the game. 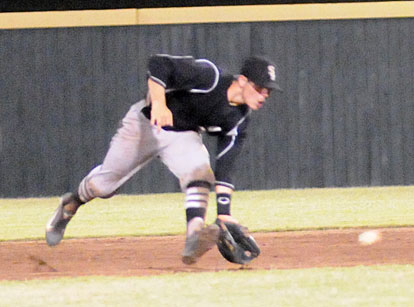 Suddenly, it was 6-5 and the fired-up Sox proceeded to score five runs to take the lead.

“I don’t know if it’s ever good for a coach to get thrown out but that might’ve been,” Hurt commented. “I think it lit a fire in the dugout. The guys were fired up after that. And D-Holt obviously took it seriously and hit a gapper and broke out. Then he got another hit right after that.”

Indeed, Holt would single and score in the seventh.

The game-turning uprising continued with Korey Thompson’s bunt single on which Holt held at third. Thompson was picked off first by Thomas, but sprinted to second without hesitation and beat the throw there by Jonesboro’s first baseman, Nic Bearse.

Trevor Ezell’s grounder to second plated Holt with the tying run. Thompson wound up scoring on a balk as the Sox took the lead. But the Sox weren’t done in the inning. Drew Tipton beat out an infield hit and Chase Tucker laced a base hit to left. 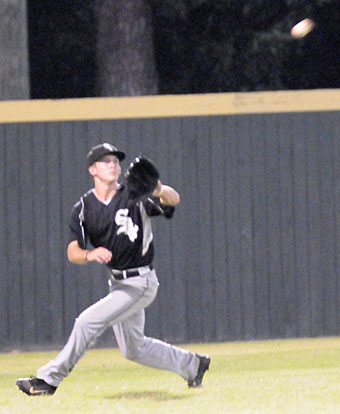 Drew Tipton locks onto a drive to left. (Photo by Kevin Nagle)

That brought an end to Thomas’ night. He had reached 115 pitches without being able to get out of the sixth. Brady Brown relieved but, after getting a strikeout, he was touched up for Blake Patterson’s clutch two-run, two-out single to center, making it 9-6.

Thomas, who frustrated the Sox early, had nevertheless thrown 97 pitches before the sixth inning began.

“He throws so many curveballs that we were really trying to not swing at them,” Hurt explained. “But he does throw them for a strike quite a bit. We tried to get some deep counts on him and lay off the curveball when we could unless they just fell right in our laps. A guy throwing that many curveballs, we want to take a lot of pitches and try to get into fastball counts. It didn’t always work but it did get his pitch count up.”

In the seventh, Ezell tripled in two runs to make it 11-6. In the ninth, Bryant took advantage of four walks, a wild pitch and a sacrifice fly to bump their run total to 14.

Justin Emmerling relieved Dale in the eighth and finished with two scoreless frames. He hit two batters and walked one along the way but only surrendered an infield hit while striking out three. The game ended on a doubleplay started by Brandan Warner at third.

“You’ve got to win games like that to win a championship,” Hurt acknowledged.

Jackson, who last pitched on July 16, retired six of the first seven Ricemen. In the third, he made a nice play on a chopper by Bearce but threw wildly to first.

Seth Eakin followed with a bunt single and a stolen base. A walk to Dillon Groves loaded the bases.

Though the Ricemen racked up four straight hits to score five runs, with runners at second and third with one out, Jackson escaped further damage by ending the inning with a strikeout.

Jackson went on to give up an unearned run in the fourth before giving way to Dale.

“I think it’s on me,” Hurt stated. “You can’t give a guy nine days off when he’s been throwing spring and summer, and he’s been in a groove, been in a good rotation. We’ve kept him pretty much on a five- to six-day rest between starts, then I throw a 10-day rest on him. Good intentions but, looking back, I wish I had never done that.

“He was a little rusty but he’s one break from that (five-run) inning never happening,” he noted. “But that inning just took so much out of him that he didn’t have anything left in the tank. He’d used everything he had just to get out of that inning.”

The Sox put together another in a series of fast starts when Ezell cracked a hard grounder towards first that took a wicked hop past Bearce. Ezell hustled and got a double. Tipton singled him home, stole second and scored on Hayden Lessenberry’s triple to right, making it 2-0.

Patterson was hit by a pitch but the Sox could get no more, though Breeding made a bid for extra bases with a drive to center only to have Jonesboro’s Turner Hydrick chase it down to end the inning.

In the third, Tucker ripped a triple off the fence in right. He would score on a wild pitch to make it 3-0.

Jonesboro took the lead with the five-run outburst in the bottom of the inning, however, and Thomas settled in for a 1-2-3 fourth.

The Ricmen’s fourth-inning run was scored by Eakin, who beat out an infield hit, was sacrificed to second by Hydrick and took third on a grounder to second. Jackson appeared to be out of the inning when he flicked a throw to Warner at third on a pick-off attempt. Eakin got into a rundown and an errant throw allowed him to score.

The Sox got that back in the top of the fifth when Tucker reached on an error and stole second. Patterson’s shot to first was knocked down by Bearce but his throw to Thomas covering first was errant and Tucker made the turn at third and scored.